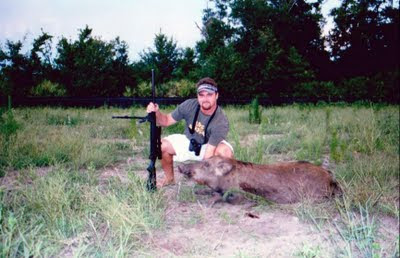 With wild pork, sometimes, you just don’t know what you’re gonna get. Take a sow I shot back in March. Her shoulder roast turned into fantastic Mojo pork, but all attempts to make a meal of her backstraps or cube steaks have landed with a thud. Grilled or fried, I was not impressed. She was plenty fat, dropped where she stood, and was properly dressed and taken care of in a prompt manner. In the kitchen, I have marinated overnight and used a tenderizer mallet, but the meat has been tough, tough, tough.

Wild hogs will throw you for a loop. I have eaten backstraps from big boars that cut like butter after grilled and many others that would vacate a soup line at a homeless shelter. Sows aren’t much different. The younger – better tasting – ones don’t usually have much of a backstrap. The older ones can be chewy. And a wet sow? Forget it!

None of these are general rules for wild pork; I just find there are more problems cooking it than one runs across when dining on deer.

So how to cook the rest of this hog? I am brought back to slow-cooking – a crockpot can make an oak coffee table tender. But I had the processor cut chops for me out of her backstraps.

Despite my Southern upbringing and love for all things gravy, up until a couple of weeks ago I was unfamiliar with the concept of a smothered pork chop. I blame my mother – Yankee. I can still smell the aroma of that kitchen where the lady introduced me to them. I would have rolled in it, to be honest.

Anyway, it worked. So here is a simple recipe for Wild Hog Smothered Pork Chops. Depending on other recipes you find online, some variations include adding onion or mushrooms. I prefer to skip these and add more salt.

Pat pork chops dry and sprinkle with kosher salt. Then coat them with Montreal steak seasoning – the McCormick’s really comes though huge in the gravy. Coat chops in flour and set aside.

Heat the oil in a heavy skillet over medium-high heat. When the oil is hot and shimmering, add chops and brown on both sides, no more than a minute or two per side for these small cuts. Remove to a paper towel-covered plate.

Add water and scrape up the browned bits of flour in the pan with a spatula. Slowly add the remainder of the flour – about 1/3 of a cup – and stir until it thickens and begins to bubble. Shake some more salt in there, if you dare.

Reduce heat, and put the pork chops back in with the gravy, cover, and cook for at least 35 minutes – and going longer won’t hurt depending on how hungry you are.

But, as your house fills with the smell of pork chops simmering in homemade gravy, it’ll be a challenge lasting 20 minutes. 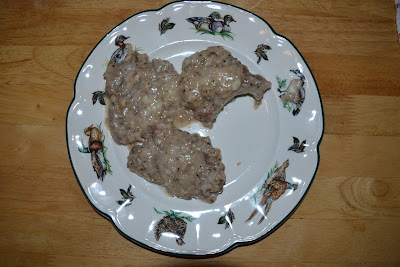 MMMMMmmm!!! That sounds and looks awesome.

I tired your receipe and it was awesome! Thanks for sharing.

Thanks for the share. I had some chops in the freezer that I didn't know what to do with and this ended up turning out to be a great meal on a rainy day. I will be making this for years to come. Will be sharing with friends and family alike.

Thank you for sharing. My wife and daughter loved the meal. I will be sharing this recipe with family and friend for years to come.