Asleep in the Stand - Hunting Links: The Coyote Edition 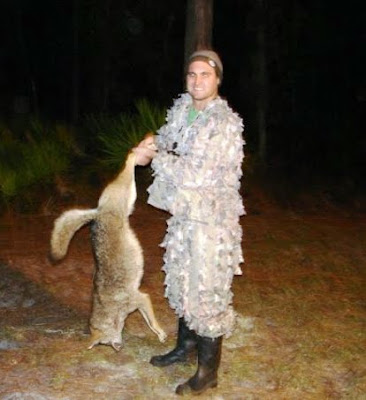 I'm not real sure what got me thinking about coyotes today. Heck, it's been a full three weeks since I've seen one. Maybe it was my dad who asked to borrow my predator caller, Mojo decoy, and .17HMR that bounced my mind this way. Perhaps it's the recognition that it's been one year since I've been off my Georgia lease where I'd listen to the yotes moan their misereres in the quiet cold of the December gloaming.

Whatever the reason, I have Song Dogs on the brain.

Dad's plans were thwarted, not by Wile E. himself, but someone who was supposed to meet him, but didn't, and yadda yadda.

I've killed a few - none that would have been any burden to man. Just those that happened by at the wrong moment. I've set out to intentionally kill more, but...well, they are about the smartest blasted animals I've run across. You need to be fully camoed, watch your scent, and cover some ground to unearth canines bedded in thickets. Hunting them in the South is supposedly a different sport than in the wide-open West. I've called a couple in. Killing them is a different task. Hopefully in February I'll get another crack at some.

Anyway, coyotes have been in the news a lot lately. Back in November I ran across this article about the dogs interfering with taxiing airline at Raleigh-Durham International. As if the airline industry doesn't have enough to worry about.

Coyote attacks on suburban house pets is also a fairly common evening news segment in Florida these days. One pack ruined the Thanksgiving holidays with it's taste for something other than turkey...guess Fido doesn't contain Tryptophan.

Florida and North Carolina aren't the only states suffering. Georgia, as I mentioned above, hosts a sizable population of coyotes. Officials there are trying to get the word out about the dangers of these animals, mostly rabies and attacking pets. As proud as Georgia fans are, I bet a hungry yote dog would give Ol' Uga a run for his money.

If you want to know more about these mini-wolves, the FWC has information here.

But really, all you need to know is well-written here by James Swan at ESPNOutdoors.com