Thoughts on a Nine Foot Gator 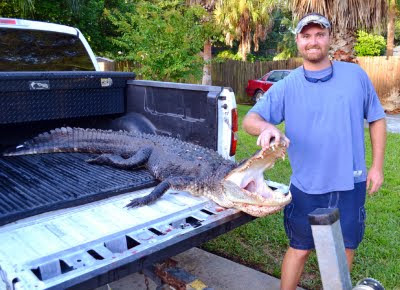 For us at least, gator hunting is a team sport. True, one person draws the tags and has the claim on the trophy, but there is a lot going on when a gator is spotted and hooked. It behooves the tag-holder to enlist the aid of licensed helpers.

Plus, it’s fun with a crowd. Alligator hunting is exciting and best shared in the company of friends. And when you get a crew together who has the hunting experience and knows each other well enough to handle a pressure situation, the results are impressive.

I don’t mean to brag, but we flat whipped a nine-footer a couple Friday’s ago. Harris had the tags for the first phase. The previous Wednesday he and another group bagged a 10-plus trophy, and I was kicking myself for scheduling work appointments so early in the morning. Friday I did not miss the invite to help punch his second tag.

As I have described previously, our manner of hunting gators relies on spotting the target and getting within range of casting a large treble hook to snag the reptile. Then we put another fishing line in it, harpoon and then bangstick. It’s not all that easy, though.

One, the gators get spooky, especially on lakes with a large number of tags. Gators are easy to spot but approaching them is the tricky part. If you get lucky, they will stay close to the surface, and you can lay a line across their backs. If they submerge before you are in range, you approach quietly by trolling motor and look for bubble trails from where the scoot across the bottom, stirring up the muck. Still other gators will go down and not move, and the goal is to wait them out and hope they surface for a breath nearby.

The first gator we moved on that morning gave us the slip. We had spied him from afar. As we approached, he submerged, but left a solid bubble trail. The problem was, he was moving quick, and we tried to keep pace with the trolling motor – as much as a high-speed chase as you can get in this situation. The hooks were missing their mark. The gator whirled around under the boat anxiety and we lost track of him. We finally picked back up on a bubble trail and watched as a small 5-6 footer surfaced. I guess we scared him up while pursuing the bigger one. He had Houdini-ed us.

I glassed a very large gator across the lake, so we cranked up and made way to his location. While in route, the gator sounded, but we quickly spied another lizard that piqued our curiosity. Harris elected to spend his final tag on him, and after locating his bubble trail, the fight was on.

Getting the second fishing line into the gator is usually the most anxious component of this experience. You have to be very careful not to tangle the other line and pull it loose, and even though you have a general idea of where the gator is, the water depth and the way the animal is swimming or laying on the bottom affect a quick hook-up. On a crowded boat and the intensity of trying to double up lines, confusion can set in and tempers flare.

Someone got the second line into this gator with relative ease. He was hauled to the surface – an angry alligator is the most PO’ed animal I’ve ever seen. I tagged him behind the head with the harpoon and the spinning Death Roll commenced, splashing water over us all and banging against the side of the boat. This guy was beefier that we had thought. 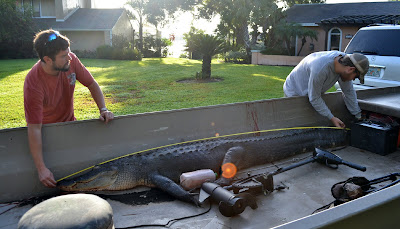 The real problem then came with the position of all three lines. As Harris readied the bangstick, I held the harpoon line while Cole held the two fishing rods, both hooks also stuck behind the noggin. When we’d raise him, he’d surface head-up giving him extra momentum if the spirit moved him to join us in the boat. And this guy could do damage.

This situation proved problematic for the bangstick. The gator was angled as such that a shot would travel through the skull and towards the hull. We needed to get him sideways instead of bobbing up and down in the water column. I tried to pull him up and troll him past Harris, but this put me in the way when the shot presented itself. Finally Cole grabbed the harpoon line from the bow and lifted. This different angle gave Harris a shot and he reached deep to pop the gator.

Harris made a great shot and the gator’s lights went out. We hoisted the gator alongside the boat, taped his mouth and rolled him aboard. All told, it didn’t take 15 minutes from hookup to finish. Probably less. Everyone worked well.

The gator taped at 8”10 with a couple inches missing from his tail – so fairly rounded up to an even nine feet. He was no monster, but a solid gator and the biggest one I had been a part of catching up to that point.

Most impressive was the efficiency in which we solved problems that presented throughout the course of the hunt. It’s an easy game to sensationalize. Between bangsticks and harpoons and snatch lines and toothy beasts, there is a high potential for dangerous incident. It’s important everyone figures out their roles quickly.

This makes gator hunting one of the most exhilarating outdoor sports in which to participate - whether you are making the kill or not. 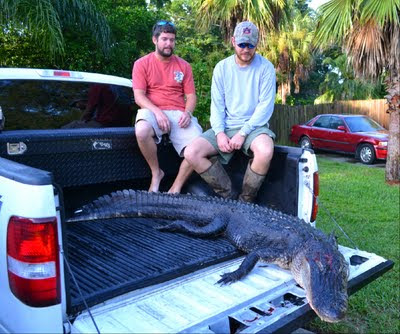