Just wanted to give a quick plug for Covert Scouting Cameras. As I noted in my last Trail Camera Pics post, my Covert had developed a few issues. The door to the battery case broke. The on-off switch snapped. And the last few pictures were over-exposed.

I wasn’t all that angry because it endured a torture test of varying, year-long Florida weather conditions. It still should have held up, but I really liked the quality of pictures I was getting, the system was easy to use, and the battery life was superb. I wasn't ready to jump ship. A quick e-mail to the company with my concerns was all it took to secure a warranty number and instructions to send it back. 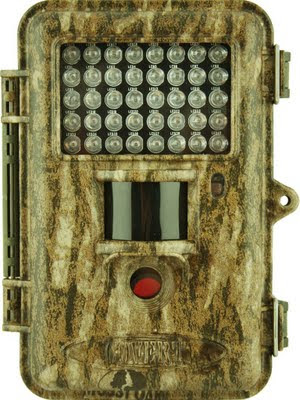 10 days later, sitting on my doorstep, was a brand-new in-the-box camera. Not only that, it was the next model up, the Covert Extreme. All it cost was seven dollars in shipping. I was terribly pleased with this level of customer service.

Covert cameras have an underground, cult following that is well-deserved. You see more of other brands in ads and magazines, but I get alot of praise from others when I mention Coverts in my posts. I've even won a few converts.

The Extreme and my previous version different in very user-friendly ways. Instead of a plug-in control system in the last model, the Extreme has all the controls on the inside of the unit, but the basic attraction of its compact size remains intact. The battery housing is different with 8 AA’s fitting snug into the unit without a weak door. The company claims the Extreme has a 1.2 second trigger time. There are all kinds of settings from photo bursts to videos, and this version is compatible with 8GB SD cards - an upgrade, as well. In addition, the camera is camo-ed in the snazzy Mossy Oak Bottomland finish.

The new camera should be deployed within the next week in South Florida. I look forward to sharing the results with you.

If you have not already, check out Covert Scouting Cameras.

Count me as a convert Ian. The Coverts are great cameras. I haven't had to work with their customer service but it's good to hear your report.