Like singing in the shower, cutting into a herd of hogs with an AR-15 is an unbridled joy. I could have popped the first one easy enough, but Travis was not at a vantage point where he could see the 100 pound sow. Plus, he was in front of my left shoulder just enough that it would have scared me – and certainly him – if I’d launched a round or three at the black pig without him aware of the situation. As we corrected our position, the sow caught our movements and thrashed into a head of willows and deep aquatic grass.

That’s when her herd of 40-50 pound progeny started piling out of the Tall Grass. They were perfect BBQ hogs. The shots would have been fleeting, but, again, with an AR-15 the temptation to go Predator-era Jesse Ventura on them was pretty high. But, I’ve calmed myself in recent years, and believe in the economy of a bullet. The group settled under those willows as we recomposed ourselves and crept in for a shot. This was pure luck; the circumstances of us even being there too convoluted to really comprehend.

The week before we had been at the ranch hanging stands, filling feeders, and preparing for bow season. It was a fine time for the battery in my truck to die. We had to call the ranch manager to tow us out of the woods, humiliated, but grateful, that his Ford Ranger was able to coax my Dodge Mega Cab over ditches and down the trails back to the ranch shed. There, the ranch manager loaned me a tractor battery so I could drive home. We agreed to bring it back at the earliest possible time and thanked him profusely for saving our rears.

We returned the next Tuesday evening to deliver the battery. I had also become concerned with the working conditions of my trail camera, so we decided we’d slip in and grab it before calling it a day. On the path back to the truck, we wandered across the hogs. It’s important to carry a rifle with you in the working hours of summer, especially when pigs are around.

Summer hog hunting is typically an early morning or last light affair. Sure, I’ve rambled across plenty in the heat of noon while driving properties or hanging stands, but by and large, the gloaming of the day is prime time. Exceptions do arise.

The hogs were out feeding well before last light, around 6pm. The caveat was the weather. A tropical wave had buffeted the property with light rain before our arrival which had significantly cooled the area. The conditions were still overcast, and for a Florida July, I’d call it comfortable. In our limited roaming, we saw several deer and a couple hens.

Florida hogs emerge from their swampy hideouts after a rain shower or thunderstorm to munch on freshly-wet green grass. The problem is, down here everything is green during the summer, so it is important to stay mobile. If it’s a blistering 95, that makes hunting awfully unrewarding. So maybe it’s as much me liking to hunt after a rain as much as hogs prefer to eat after one that makes this summer hunting successful. Either way, it is savvy practice to stay on alert during these times, whether you are out stalking or out bumbling.

You could always guard a feeder, but stand hunting in the summer for hogs doesn’t do much for me. The cat’s meow is to park your truck under a shade tree with the A/C and radio humming and glass cow pastures and cutovers, then slip out and stalk up to them. Hogs are the perfect southern animal on which to hone your stalking skills.

What is also nice about summer hog hunting is the lack of hunting pressure. While we were on a private ranch, it gets pretty heavy traffic from September through April, and not all of the guests are as single-minded about deer or turkey as I tend to be. During this time, too, the ranch hands do a fair amount of dog hunting and trapping. This all relaxes in the summer, as do the hogs. Even drawing on experiences from other properties that have not endured the hard-core hog obliteration, the pigs just seem more comfortable in the summer. Wish I could quantify that beyond anecdote, but I can’t.

It’s too bad Florida doesn’t open more public lands to summer hog hunts. Swiftmud is currently analyzing their lands to see which would be suitable for hunting. They’ve been amenable to hog hunts. It’s something to investigate. And those of you on deer leases who don’t hog hunt are missing a fine offseason reprieve.

Wild hogs are also a delightful quarry on which to employ some of those neglected arms in the back of the gun locker. Summer hog hunting is the perfect opportunity to pull out that old lever action or handgun. Or Grandpa’s old military rifles. Perhaps try open sights for once in your life. Any fast-handling firearm is perfect for sneaking up on a sounder. 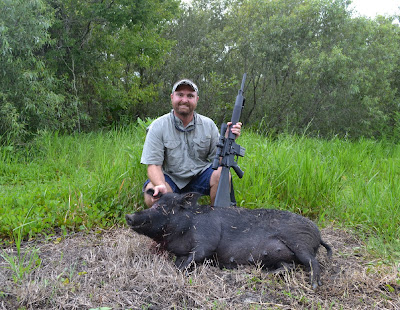 To wit, the AR-15. Those hogs were bayed in the willows grunting and wheezing. Probably not a great idea to get any closer, but we were game.

From the corner of my eye, I caught what I thought was a boar lope across the road. I swung and fired once, rolling the 150lb sow head over heels.

My first reaction would have been to cut loose on those critters using everything in my 30 round banana clip. Been there done that. It is quite rewarding!!

Looks like you are keeping the shooting skills sniper sharp. I love it, we do have a contest championship to defend after all!

We will dominate once again....well, I should be able to contribute a doe...

I've never killed one, but I've eaten em and they're tasty.