The plan was easy enough – arrow a barracuda. Maybe not the smartest plan in the world but a challenge that no one I know has attempted. The idea was to visit a buoy south of Ft. Pierce Inlet where local fisherman stop to sabiki sardines and threadfins for the more serious business of offshore fishing. It is also here where the barracuda lounge around, eating at leisure on the hapless bait and the foraging bonito, jacks and assortment of other piscine predators there to fill their stomachs, as well. It’s 25-30 feet deep here, but if there’s not a lot of boat traffic, the cuda will tread near the surface, tail fins often poking out of the water. Over the years we’ve seen real leviathans, and I wanted to stick one badly.

But apparently Tuesday, August 2nd was a holiday I was unaware of as there was a merry band of boaters on the water. 6 or 7 boats peddled around the buoy trying to fill their livewells. Another 3 or 4 boats were on a plane in that direction. This did not bode well for the prospects of lazy barracuda and easy targets.

We could have maneuvered our way into the mix, but I was downright hostile to the idea. One, I don’t like people stuck all up in my beeswax. There’s every reason to believe I was the first ever who’d visited the buoy with a bow and arrow. Fishermen are a curious bunch, and I didn’t care to repeatedly explain myself. The activity is perfectly legal, but you never know when an ignorant angler may call the law and have to deal with that hassle.

Next, barracuda have this terrible habit of leaping out of the water when hooked by standard fishing tackle. There may be Minnesota-Americans reading this who don’t have a clear concept of what a barracuda is – once it leaves the water, it is a wayward rocket with teeth that clips serious holes into whatever it hits. Occasionally you’ll read stories of one jumping randomly in a boat and chewing up its crew, but more often than not, it’s a hooked fish darting into the cockpit that tears people up. So arrowing one amidst a bunch of boats had the potential for a sad, litigious ending.

Dad and I tossed out a couple spoons and trolled the area for mackerel, without luck, until the boats cleared away. Immediately I could tell the fish were spooked. They were down deep in the crystal water and showed no signs of rising. Oh, we saw plenty – schools in fact, some fish that’d probably hit the 30 pound mark. I did tag one in the side with an arrow - I was more surprised by it than he was - but at the depth he was cruising, the arrow harmlessly bounced off and he sped away.

So we pulled out the SWAT tactics. Dad would cast a surface plug and retrieved it as fast as he could. Cuda love chasing fast-moving lures. And they did, but still stayed deep. The next trick was to rig up the sabikis and try to lure the barracuda alongside the boat with fresh bait. For those of you who don’t know, a sabiki rigs is a gangline of five to six small gold hooks with little white “wings” that you attach a weight to and jig through schools of bait. The baitfish attack the miniscule lures, and it’s a pretty effective manner of filling a livewell with frisky baits. We had one sabiki rig. On the first cast, I hooked into four or five scaled sardines.

Annnnddddd, the line broke sending the rig and baitfish into the Locker.

I was flabbergasted as the clown music was now blaring loudly. Foolishly I expected easy and planned accordingly. This cuda thing just wasn’t going to work out today and the August heat was cranking up. Dad mentioned a grassflat in the Indian River he had fished the previous day filled with mullet. Mullet are on the other end of the spectrum of dangerous game, but I am sure in the annals of African safaris, some lion hunter frustrated with his ill-fated pursuit, soothed his irritations on a herd of impala or dik-dik. So, we left the blue of the Atlantic to head to emerald green of the Intercoastal. 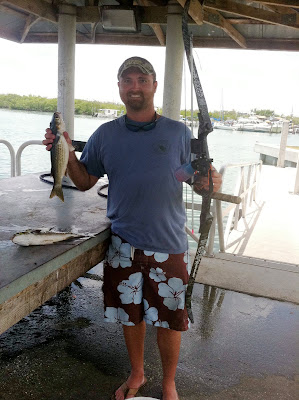 Dad was right. There were plenty of mullet. Also stingrays.

I’m on the fence about stingrays. They are tailor-made for bowfishing. But, what to do with them? Their only real purpose on Earth is to feed sharks, but that still is not enough reason to shoot one. And these were big rays – 30-40 pound rays. I’ve caught enough on rod and reel to know that, unless I brained the fish, it would be a struggle to get it to the boat with what little line I had in the AMS. This is in extreme violation of the fisherman’s affliction with reeling in the Big Catch, but I could log no ethical reason to pop these slow-moving flat fish. Then again, I didn’t have much reason to shoot barracuda either. Silly how ethics works sometimes.

The other frustrating fish were the snook. It is highly illegal – as in, BBQ a bald eagle illegal – to spear snook. And it was out of season. And most of them we saw were over slot size. But linesider after linesider drifted by the boat as I perched near the center console awaiting passing schools of mullet. They’d given me the electric chair had I pegged the 20-pounder that hung off the transom, eying me, almost Triple Dog Daring me to shoot.

Mullet it would be. I shot three in about 200 shots. Two were intentionally shot; the smallest I flock-shot. So, I didn’t bag the biggest fish in the seas.

But unlike stingrays and cuda, mullet do nicely translate into this: 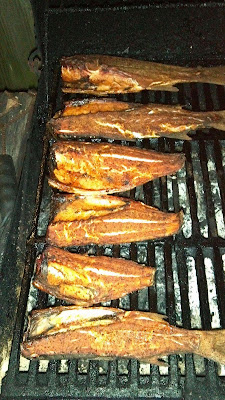 Plans nearly always fall apart, but fun can still be had by those willing to go with the flow.

Could not agree more!

Good luck next time bud! Fish look great on that grill. Still waiting on a "smoking" recipe from you!

My next door neighbors growing up in SE VA were mullet fishermen. It's really not a bad fish, when it' s not being ground up for bait!

I shot a 4 footer with my bow today. I'm just going to go ahead and say DO NOT DO THIS unless you are properly set up. I myself was not. The barracuda was being really lazy as you described and I was literally able to get right above him on a barge. I took my shot and before I knew what had happened he had ripped the arrow out of himself and was gone. I made the unfortunate mistake of trying to keep ahold of the line while this beast was on it. my line burned through several layers of skin on three of my fingers. I will only shoot a big beast like this again if I have extra line and it is tied off to something. I would also recommend a very sturdy tip. This beast was strong enough that he yanked the barbs of my muzzy penetrator tips backwards. I will snag one someday, but I will never grab that line after I do, and I will definitely make sure I have a serious tip on my arrow, standard muzzy tips won't cut it.