I’m in the midst of a taxidermy binge. Which is great – it means high times afield. My bobcat is close to completion. I just hauled a bull gator to my man for a head mount (story still pending). These specimens were clear-cut trophies, and I am excited to put them on display.

But the mount I’ve most been looking forward to was delivered yesterday.

I am not a fan of altering trophies. I want them to represent the animal honestly and in as close a position to what it was doing when our paths crossed. Hogs, for example. A lot of boar mounts have their cutters pulled out to make them appear more ferocious. It’s a bogus memory. Likewise, I didn’t want my bobcat mounted on a limb with claws and teeth baring and coming off the wall like it was shot out of a cannon. I chose a style where he was in a semi-sneak, like he was pursuing the female cat with him. My wood duck is not in flight because I shot him off the water. Kidding.

To each his own, of course. I just like the memory and mount agreeing on the moment as much as possible. European mounts are different. It’s a skull. It’s a memory, but it’s difficult to evoke the same feelings as a pelt. The skull is cold.

Now, I do think they are awesome. I have several hogs and a couple deer done this way, and they fit well in my taxidermy display. And they are more hands-on figures. People can examine the hog skulls and mess with the teeth. It’s cool. When I saw Matthew Beck of Legacy Skull Preservation offering Alligator European mounts dipped in camo, I knew I had to have one.

If you have not read my interview with him from last month, please do so – or at least visit his site. He works very hard at preserving skulls. In April I took him a skull from my first gator season two years ago, an 8-foot female pulled from Lake Garfield after a week of hard hunting. I had done what every lazy person seems to do with these things – place it in an ant bed, sun bleach it, and tuck it in a closet until I could find the time to reassemble the teeth – which, let me tell you, picking through a fire ant bed trying to find them all is none too pleasant.

The skull had a chalky feeling to it. The lower jaw had splintered and the bone was separating by the nose. I applied glue to hold everything together. When I went to re-set the teeth, I realized I had no clue in the world where they all went. I took this mess to Matt, and he was kind enough to accept the project. It took a while for him to repair the damage I’d done trying to bleach the skull, but the finished product has been the joy of my week. 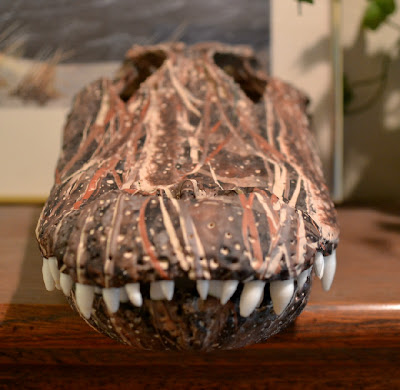 The camo pattern is called Boggy Vizion. The skull is sturdy and smooth to the touch. The white teeth really pop against the dark camo. I love it. My wife loves it. All God’s Children love it.

Next time I get a large gator I’m gonna have Matt mount it bone white. The camo really hides the work he put into this one. That would make three gator mounts, which is more than fine for my trophy room.

That is sooooo cool!!!