Two Squirrels and a Seventeen

I hadn’t been squirrel hunting in about five years. I have a Marlin 917 in 17HMR that’s been largely ignored for nearly that length of time. The moment had come to remedy these sorrowful facts.

Did you know that my first hunt was a squirrel hunt?

Probably because I didn’t tell you, nosy. My dad and I were invited to a camp in Cross City in the Florida Panhandle by some friends of his for a weekend of bushytail hunting.

I was six, so the details are a little fuzzy. Try and stay with me.

The morning was largely fruitless, but we did happen across one lone squirrel literally begging to be shot. Seriously. He sat exposed on a pine branch and just barked at us.

Dad let me carry the H&R single shot 20 gauge because, you know, most six year olds can heft a firearm that’s three-quarters their size – Dad started me out as his personal gun valet early.

I remember the squirrel. I remember aiming. I very distinctly remember that recoil against my young, growing bones. It’s probably the reason my right arm is four inches shorter than my left and why, consequently, I swim in circles.

After I stood back up, dusted the pine needles off my jacket, and Dad retrieved the gun, we went to look for the squirrel. Dad claimed later that I vaporized it, scared I guess to admit in front of peers that I was a terrible shot for a 1st grader who had never fired a shotgun before. Or maybe he just couldn’t disappoint those soft brown eyes of mine. Either way, he delivered it in the same patronizing tone I’ve since employed when I know he missed a deer by a mile and reassure him his sights were probably off.

Anyway, that was then. I got older, procured a pellet gun, and squirrels started becoming scarce around the ol' homestead. Pan-fried, barbequed, it was my formative years of learning how to burn food. Over time, squirrel hunting took a back seat to more important ventures, save the days when Travis and I would go to his ranch with my Ruger 10/22 and a 30-round magazine and try to blast them off branches like we were shooting an Ack-Ack gun.

Fast forward to present day. My trail camera captured hundreds of photos of these greedy little tree rats eating the corn from the feeders. I’d walk up to re-fill them, and they’d bound up the tree - pausing halfway up to catch their breaths they were so fat - but generally caring little for me. They ruled the feeders with impunity.

Enter the .17HMR. The day was muggy for Spring and the woods still. Birds weren’t chirping; really no sound other than the trucks on the highway. Never a good sign.

But I can make them talk. Oh, I have ways. Now, quick side note, this is the kind of knowledge I would have never shared in high school for fear of being beaten severely by members of the football team, but now that I am older, have developed more self-confidence, and carry a loaded .45 ACP on me at all times, I no longer harbor such reservations.

Find a likely squirrel haunt, loudly kiss the back of your hand and shake a palmetto or other tree branch. You look like a major goob, and it’s not really for the YouTube generation, but for some reason this gets them barking. This tactic is really a credit to me not having a girlfriend for a long time.

It worked. Unfortunately, the two squirrels that responded were in oaks way back in a sea of palmettos. Seems I’m not as gung-ho for rodents as I thought I’d be.

I pressed on in a loop around the lease. At the feeder on the north end, a squirrel barked profanely at my intrusion, cocky little miscreant. I missed him twice, but the second shot could have been at Spanish moss wedged in the crotch of the pine. So we’ll say I missed once. Sights were off, anyway.

(In all honesty, I was taking the best shot available which meant shooting through twigs and leaves at times; it doesn’t take much more than a change in atmospheric pressure to swing that 17 caliber off course. Or make that fragile bullet explode.)

Reading advice on outdoor writing, they say stories of unsuccessful hunts don’t sell, so let’s skip past the next 4 or 5 squirrels still breathing fresh air and go to the glory. Now this was a big squirrel. I felt a little under-gunned. Still, I kept my nerves at bay. He bounded up the tree pausing in the stratosphere as I steadied the rifle. I’d like to tell you I threaded the needle, but boasts such as these tend to get watered down after confessing to so many misses.

One squirrel just didn’t feel like success. But, it was nearing dark and I wanted to snap photos with my new camera, which, by the way, if calling squirrels doesn’t make you feel a little gooberish, setting up a tripod and timer to take your picture of one should usher you straight into Dorkville. (In fact, it was a conflict of conscience that I even posted the picture I did...yikes.)

I got lucky. On the hike back, one smug squirrel posted up in a scrub oak began barking incessantly at me – kind of like that vaporized rat from my youth. After reloading the magazine and trampling through the palmettos I avoided earlier, I finally tagged him. It was time we could all go home.

A lot of fun, squirrel hunting is, and it’s kinda sad I forgot that. I burned through half a box of ammo, got some exercise and dinner for a night when my wife is away.

Turkey season is pressing, and I did a lot of predator hunting this winter. Sure was nice to switch up to an event without so much scheming and detail. 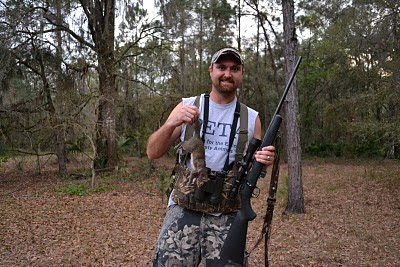 Squirrel hunting rocks! This is what Rambob and I usually do between hunting seasons.

I'm going to try your kissy call out this weekend....and get a picture of Rambob because I am sure I will get "the look" and a shake of the head, haha

I love it! Squirrel hunting can be so much fun. I have even trained my dog to run them up trees while she runs through the neighborhood woods. Nothing like bringing a tree rat down to earth!

I forget where I picked up the kissy call thing. You can probably use a mouse squeaker and accomplish the same thing.

My husky chases squirrles so effectively I wonder if she had been reading manuals on how to do it. Nice to have a good dog, huh?

Love the story, Ian! I used to squirrel hunt a lot when I was younger, but got away from it in favor of deer and turkeys. I'm getting back into it again.

Thanks for sharing! Though I can't really understand why a girl wouldn't like your "squirrel call"! LOL

I took my first squirrel at age twelve. They remain my favorite prey. I just wish my wife hadn't sworn off making squirrel gravy (or cooking in general, for that matter)!

Chaplain to the Outdoorsmen said...

great story... you know it has been at least 13 years since I last squirrel hunted. I think I just might have to get the boys out squirrel hunting this spring.

Gone'n have to check into DIY hunting the National Forest here in Southern California for squirrel this year.

If anyone has recommendations here in SoCal, please let me know.

Nice job! Remind me to add your blog to my links