The Downside to Wild Hog Management

Have you ever hunted by a feeder when the hogs start trotting in? It’s quite the cacophony. The urgent hoofbeats and grunting. Greedy buggers.

Per usual, I heard this one coming. The ground blind was designed as an archery ambush. The shot would only be 25 yards or so. You take a folding metal chair and sit amidst the ring of cut palmetto fronds underneath a fallen pine braced by a rotting water oak. It’s a fine, shadowy haunt, but today I left the PSE and toted my pet Savage .300 to eliminate the guesswork.

While the rest of the country was being buried under snow, South Florida was caught in the frontal boundary. Warm Southern Winds made this afternoon a sweater. The switching gusts of the weather system created a cyclone of human stink. I could spray down with cover scent and possibly fool a deer. Not so with a hog.

The small boar, maybe 50 pounds trotted by at 10-12 feet as an ungrateful switch of North Blow piled him with sweat. If I’d hopped out and hit him in the face with a pie, he wouldn’t have been more spooked.

The young guy wheeled around and hauled pork butt, front legs between the back, motoring as fast as he could. As a final indignation, he paused for a few moments out of sight and whoofed at me. Maybe my trail camera will catch him later.

And that’s as close as I’ve come to killing a hog in a year, the longest time since when I was 12 and shot my first, and 14 when I shot my second. Strange, because I have always taken it for granted since then. 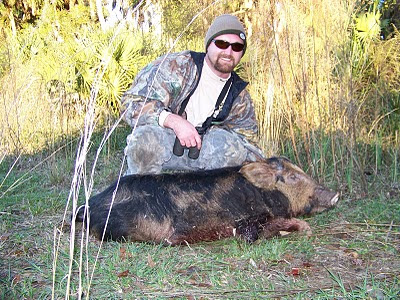 You see, conservatively estimating, I’ve laid low 150-200 hogs in my day. A great many more would have headed to the Sty in the Sky had my bullet found its mark. Others were lost to unsuccessful tracking efforts.

Oh times, how they have changed.

In the day when my father and his buddies worked for the phosphate mines, we hunted thousands of acres of un-pressured Hog Heavens in the unspoiled river bottoms and adjoining fields. In the summers, it was nothing to pop several dozen a year. I credit my shooting acumen to those well-spent days.

After that was gone, intermittent invitations over the next couple years to others’ properties filled the void and rather successfully, I may add. Then Travis and I started regularly hunting a large ranch in Sarasota County where T had been hunting for years on a strict invite-only policy. This place swarmed with hogs, and the landowner entreated us to shoot as many of the pasture plowing pests as we could. He didn’t care, and we obliged.

This is where I was hunting the ground blind.

Last year, we signed onto a lease in Polk County that had a fair population of pigs. Almost every trip out, someone saw at least one. A few were killed. But six months of activity on 120 acres left the land vacant before the October air cooled the state.

Back to the Sarasota ranch I was talking about, we have hunted a half-dozen times – by stand, by still-hunting, by truck to spot and stalk – and a couple boars were taken in August. Since then, nada.

Came to learn, the ranch had hired a young man to tend to things around the property. As a job perk, he was able to run dogs at his leisure, and he spent his summer rounding up swine. Couple this with a new deer season that ran from August to January and the accompanying hunters, the survivors learned their lesson. One group from North Carolina comes down annually with horses and runs dogs, as well. They’ve been known to take a few dozen pigs a trip. The cowboys will run traps from time to time. And in the 5 years I’ve been hunting there, we’ve made our presence felt, too. (One particular December hunt I call “The Day of the Dueling 300’s.” If that paints a picture for you.) 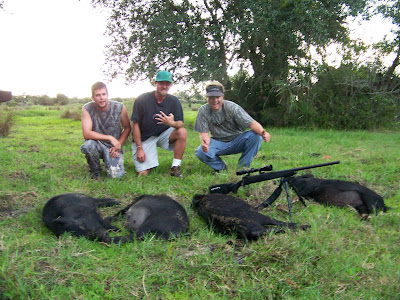 Not that there aren’t plenty of hogs left. There are. They are just a little wiser in the ways of the world. The owner wanted serious hog management and he got it. The fields are no longer plowed through. His waterways and irrigation ditches don’t look like he hosted a year-round mud bog competition. In the long run, for the deer and bird hunting, it’s a great thing. If you’re looking for a meal of pulled pork, it’s a little unseemly.

Hogs will respond to this kind of pressure. The older ones will hole up in the real nasty stuff. Or they’d just trot off to a place with less pressure. It doesn’t take wild hogs long to travel a few miles. And they will. That’s what I think has happened at our Polk County lease.

It may not be possible to totally get rid of them, but at least you can keep them down to a dull oink.

If you saw the special on the Discovery Channel about wild hogs in Abbeville, Ga, well I am about 20 minutes from there. Come on up and get you some. We got plenty!

I've seen it several times. I'd like to come up and do that nightvision shoot they do in GA fields. And hunt from Helicopters in Texas....fun

The only time I've hunted wild hogs was in TX. It was a blast! And the corn feeders scared the crap out of me!

Great bit of writing and I can understand about taking certain animals for granted. Those hogs do get smart and hunker down. That's what has happened where I am. I know of two other spots to check out that are a bit closer to home. I hope to arrow my first one in a few weeks!

Good luck to you, Albert!

Interesting! Re-Posted your article and pic on Getapig.com...

Hey Ian,
I remember the carefree days of the late eighties and nineties. With the number of ranches plowed under by subdivisions, it's just not the same as it was. Few ranchers open their gates to a fellow asking permission to hunt hogs or no hogs.

I know everyone says we don't want them up here but they sure sound like one fun animal to hunt.

I know everyone says we don't want the hogs up here in Agriculture country, but they sure do sound like one interesting animal to hunt.