The Almost Blew It Bobcat

I almost blew it. I know better than to leave my rifle leaning against a tree when I’m in the woods, even for the briefest of moments. That’s when they take advantage of you.

I had finished my final calling session of the evening, eager to leave the mosquitoes and hit the showers for a birthday party I had committed to Friday night. Once again, predator calling skunked me, and I was over it anyhow.

On the way to grab the flipping and flopping MOJO Critter, two previously unseen gray foxes bounded into the swamp. Didn’t really matter – can’t shoot them anyway. I proceeded to the decoy and glanced down the road. Half-crouched, eyes transfixed on the MOJO, a bobcat was keeping watch.

Frozen in the open, with no weapon - there’s no way he didn’t catch me! Why he didn’t bolt like the foxes is beyond me.

How amateurish. From both our angles.

I had set up at the end of a truck trail along the fence that divides our lease in half and cuts perpendicular through a cypress swamp that strings north to south. On the east side of the swamp is a pasture consisting of scattered pines and scrub oaks, with just enough palmettos in between that clear shots would be short. Nick fired at a coyote here in the summer, and a month ago Krunk and I dialed up a bobcat that slinked away before a decent opportunity.

Walking in that evening, I noticed a healthy set of cat tracks in the deep black muck of a pothole in the road. Also found scat and claw marks where a feline had clearly relieved him or herself and tried to hide it from the world. So bobcats were certainly in the vicinity.

I unwound the thin black cord from the base of the Johnny Stewart Digital Call and hung the megaphone in the crotch of a pine branch about seven feet off the ground to give it that Reach Out and Touch Someone effect. The MOJO was placed at such a distance relative to the call and my haunt that I would be the fulcrum point of an isosceles triangle.

The tricky part was deciphering from where intended game would emerge. The breeze was flat dead, but I still wanted to have downwind covered as coyotes tend to swing around to that side. Smart money was to focus on the road along the fence, though. That’s where the sign was and predators tend to use well-worn paths on their approach. If anything wandered down the trail, it would easily catch sight of the motorized decoy. Then they'd come bounding in, I'd raise the rifle and shoot, and friends and family would host a Hero's Welcome upon my return.

I settled against an oak, shifted my rifle to cover the decoy, and the hunt was on. I selected the Cottontail in Distress offering and played four series, waiting 5 minutes in between each sequence.

Thinking strongly of coyotes, I was discouraged. They’d be here by now, I thought. Plus, my wife was assuredly anxious for me to return home to go to this party. Time to call it – they beat me again. The Canyon of Heroes would have to wait for another day.

That’s when I stood and leaned the Savage against the tree and advanced towards the MOJO.

If only I could slip back...

I slowly sidled out of the cat’s view, quickening my pace to a trot when obscured by the swamp. I snatched my rifle, tossed it to the shoulder and crab-walked like a Navy Seal point man about to pop around a wall and blast a terrorist. In this case, a Turkey Terrorist.

Miraculously, the bobcat was still there. I guess it's true about the curiosity and the cats. Or maybe that MOJO works better than I surmised. More miraculously, what with all the hurry and anxiety, I connected on the 30 yard shot. 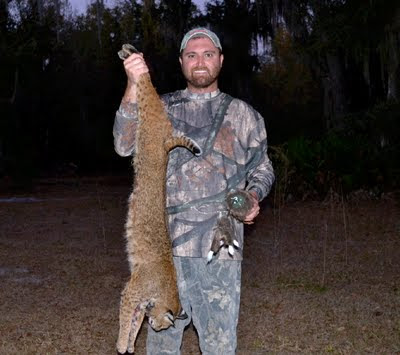 Gorgeous animal - the first I had ever called in and shot. The party would have to wait a while as I hiked to the truck, drove back, and set up the camera and tripod for the Grinning Idiot Hero pictures.
Posted by Ian Nance at 2/23/2011 11:42:00 AM

Way to go man! Sounds to me like the plan worked just fine! :) Nice cat!

Awesome cat, Ian and a great story. Wish I had seen that all take place. A beauty for sure!

Thanks ya'll. Been lucky with the cats this year, for certain