The white-winged dove have returned to town. I typically notice them around April. They migrate from the south as Spring approaches, leaving before dove season resumes in the fall. Pretty convenient. 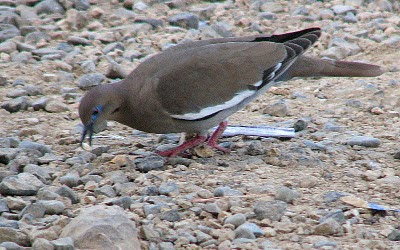 I have shot a few. They are striking birds compared to the dumpy mourning dove or the collared dove, also native to my yard. Their calls are not as sorrowful, either. Rather upbeat, which is appropriate for this time of the year.

White-wings are indigenous to the Southwest and parts of Florida, best of my knowledge. Aptly named, while in flight their wings flash a vivid white. Taxidermy-quality animal, methinks. White-wings are also not in as big of a hurry as the rush-hour morning dove. My shot-to-kill ratio on a dove hunt would improve dramatically if they were here in October.

While the dove are early coming, another group of birds is late going. Strangely, there’s a gigantic flock of robins hanging around. They’re typically winging it back north by now. Some tree – I am not an arborist – by our kitchen door is budding berries and the red-breasted birds are bustling around this buffet, chirping and screeching. Always nice to see them in the fall; know ducks will be down soon.

And in the beauty of interspecies harmony and cooperation, the two species roost in the pecan tree that looms over my driveway, completely hosing down my beautiful truck with what looks like puked up blueberry pancake batter courtesy of a drunken houseguest. Thanks to our outmoded gun and game laws, I am barred by regulation from remedying this predicament. Otherwise, I'd sit on my tailgate with a semi-automatic shotgun at night in my crowded neighborhood in downtown Lakeland and lay waste to the little crapheads.

Makes me awfully hostile towards the avian kind. Luckily, turkey season is nearing.

Speaking of turkey, I almost caused a very serious traffic accident yesterday morning. Approaching the entrance to the Circle B Bar Ranch on the north side of Lake Hancock, three jakes pecked in a pasture near the road. I slammed the brakes on my caca-covered truck. Luckily the cement mixer that had been following me didn’t park on my cab.

Sadly, I had no camera, and thanks to our outmoded gun and game laws, I was barred by regulation from U-Turning and blasting them with the shotgun that may or may not have been in my back seat. Still, it was cool to see them and so close to home. The turkey population in central Florida appears to be expanding.

Unfortunately, and despite my numerous protests and letters, the silly County Commission closed the Circle B to hunting. I guess when they need funding down the line for whatever observatory platform, paved pathway or other gimmick birdwatchers require for their hobby, an auctioned turkey hunt will be out of the question.

Last Friday night while predator hunting, the owls were going bonkers, their Who-Cooks-For-You’s? vibrating through the woods. Owls are so primeval in their mannerisms. Their pace is all off, reptile-like in patience and sheer coldness. Hearing one rev up the hoots around you in the dark will certainly result in goosebumps.

Soon their music was followed by the misereres of the chuck-will’s-widows. Folks often mistake the chuck-will’s for a whip-poor-will. Both are depressing names for a bird, if you ask me. I’d call them repetitive-songed night-haints. Both are members of the nightjar family, though you’d have to be a pretty serious bird dork to tell them apart by casual appearances alone. 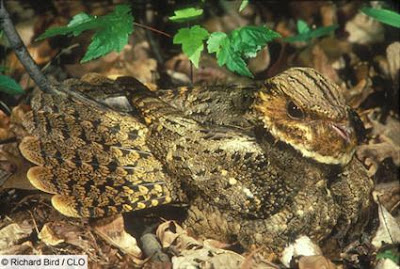 If you ever see one. Occasionally one will fly in front of your headlights while returning to camp. Sometimes in the dark you can catch their glowing eyes with a spotlight as they hunker in a myrtle or palm. Many people down this way refer to them as Bull Bats.

The Chuck is more often found in my part of the country than the whip-poor-will, and his call is singular in refrain and lyrics. It’s crazy to know that, actually.

Beyond the power gobble of a tom in the twilight, the pleading of the owls and the dirge of the nightjars I identify more with March and April than any songbird.

Have you considered a pellet rifle-in-hiding for the little "dumpsters?" You don't dare let any neighbors see you, but you could eat the evidence.