To Invasive Species or Whatever

From DailyFinance.com, a Top Ten list of invasive animal species in US territories. Living in Florida, a state thriving with exotics, I find this list somewhat specious.

How does the cownose ray - indigenous to both the Gulf and Atlantic Coasts as well as the aquarium at Tropicana Field - make this list and the wild hog does not? I guarantee feral pigs endanger more than a $4 million oyster industry. 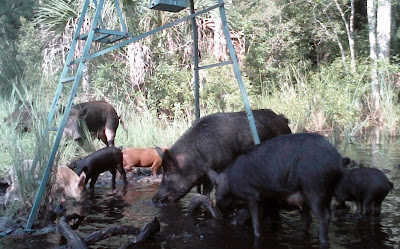 As for the pythons. I'm not sure I buy the concept of the Super Snake; maybe it will happen, and future generations of hybrid serpents will learn to chow down on the ubiquitous armadillo which, legend has it, are thought to be descendants of a pair that escaped from a zoo in Cocoa, Florida several decades ago.

Starlings - and not the rock pigeon? I would add Muscovy Duck, but I guess they don't inflict much economic impact unless you hit one with a Prius or Miata. Actually, the good ol' Mallard is a nuisance in FL where they are interbreeding with native mottled ducks. These are not your migrating mallards causing the problem. These are domestic ducks that inhabit city parks or are purchased as Easter presents and released. This hybridization could result in the extinction of the mottled duck in this area.

Coyotes and Geese I kinda understand - I'm betting some Canadian folks may say the same for Wild Turkey. I believe it's in Ontario where they are having problems with an overpopulation of wild turkeys in cities.

Anyway, Top Ten lists are fun to pick apart and analyze - especially when a wildlife authority like DailyFinance.com seizes the reins. If you have any other suggestions for this list, let us know!

Geese and coyotes are the only critters I have any experience with - I do think something should be done about Canada goose numbers in cities and surrounding areas, but then I like to eat them. More for me the better.

The snake problem I have heard about in Florida. Is there protection for them? I would think that they would make fine and very plentiful eating!

Personally I think that the problem down south with the wild hogs is what needs to be dealt with first. we have came down to Texas to hunt them the last 3 years and its unbelievable, the amount of damage they do is unreal!!

You are right, they rip up everything.

One species I forgot to mention was feral cats. They should definitely be here