This story of Ted Nugent's no contest plea to illegally baiting deer in California brought to mind a blog post I started in a Georgia deer camp a couple Decembers ago that remains unfinished. The piece is still just a trifling. I've edited, re-edited, shelved, and unshelved this article so much my hard drive is wrinkled...I just can't make it fly like I want. Anyone who writes knows the feeling.

So, what the hell. Let's just spray it out now since he's currently relevant. 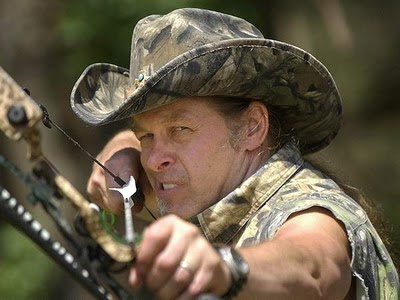 You have to hand it to the Nuge. While his TV show, The Spirit of the Wild, is little more than a pimp program for his sponsors, watching it you get the sense Uncle Ted will whack just about anything that ambles out. Does, yearlings, big bucks, it doesn’t matter; the mystical flight of the arrow always strikes the pumphouse accompanied by a cacophony of catchphrases, praises, and thanks from the Backstrap Hunter for being able to pluck the Great Beast from the Protein Tree. Or something to that effect.

Talking about the 2nd Amendment and hunters’ rights, he’ll do just about anything, too.

Yes, to call Mr. Nugent outrageous is a tad of an understatement. Not surprisingly, the Motor City Madman is perhaps the most controversial member in our hunting village, but he is no idiot. His outspokenness for hunting and the Second Amendment may rankle some in and out of this community, but don’t let his antics confuse the importance and effect of what he preaches.

The genius of Nugent is his touch with a common thread of thought amongst the average gun owner and hunter. On an episode of Spirit a year or so ago, he made his feelings known at a town hall assembly, in no uncertain terms, that he prefers a dead, gunshot criminal over a dead, gunshot victim.

The interviewer was noticeably taken aback, and mostly speechless, lacking the skill-set necessary to cope with this unique bluster. But in listening to Nugent, what he said is nothing I’ve not heard all of my life from hunters and gunowners and their thoughts on the Second Amendment. It’s not polished enough for the media to take seriously and at times is downright redneck-ish, but it’s there, and to underestimate it would be a mistake.

This is the power of Nugent, this rally-the-troops presence. His public image secures his forum, and his anti-elitist prose endears him with those who don’t possess his spotlight.

There are a multitude of lobbyists and gentler spokespeople that fuel the inside fight for the right to bear arms and outdoors interests, but few can summon the passion with their PC rhetoric as Mr. Nugent can with his – as he sees it – “tell it like it is” strategy.

Nugent is, for better or worse, the predominant voice of this silent majority, those that can’t make their way onto a Versus TV show or in the pages an outdoor rag. Those whose piecemeal thoughts feed the forum fodder. If the proverbial garbage hits the fan over assault rifles, handgun bans, hunting restrictions or any related subject, count on Nugent to be at the forefront, blowing the horn, waving the flag, and leading the charge. He is a leader.