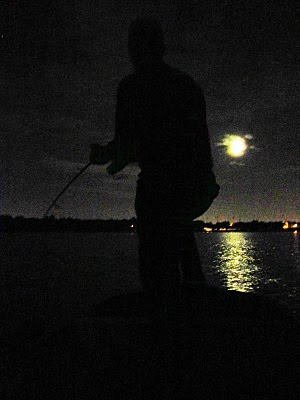 African hunters claim an angry Cape buffalo stares at you like you owe him money. I can’t say for sure if this is true, and I don’t want to ignite a chest-thumping contest of any kind, but I will testify that this alligator looked like we owed him money, would burn our houses down, and abscond with our wives. He was PO’ed, brother. Those fiery red eyes reflected in the spotlight beam. His mouth poised open with rows of pearly whites ready to strike. His back arched out of the water like a defensive Halloween black cat. If he’d blown a five-foot flame from his mouth, I would not have been surprised in the least. Mother Nature could not construct a surer sign to say “back off!”

Of course, I probably would look the same if I had two treble hooks in my side. We found this guy fairly quickly, swimming across the open lake. As we neared, the big motor was switched off, and the trolling motor was eased into the drink. At a range of forty yards, the first snatch hook was laced over his back, and the fight was on.

Striking the second snatch is always tricky. You don’t want to cross the streams, you might say, and risk popping both lines when he gets to spinning. But you have to get another one in, for one measly line is not enough. We managed to do so after a few adrenaline-boosted attempts. Alongside the boat, it took my second stab with the harpoon to sink the point under his thick skin. Really irritated now, the gator went into the Death Roll, snapping his jaws and slapping his tail against the hull. He wheeled up one fishing line like a yo-yo, snapping the tip of the big rod.

I slid a 44 Mag. round into the chamber of the bangstick and waited for him to be maneuvered for the shot. Upon contact, the round severed the steel cable attaching the harpoon point to the rope and buoy. It would be akin to me flicking a cigarette butt out of the boat and burning one of the fishing lines – I couldn’t do it on purpose in a 100 tries, if not more.

Shocked initially by the percussion, the gator soon came to and thrashed his way off both catch lines, which were now a tangled mess, not a problem if the harpoon line was still attached. He beat a retreat to the bottom of the lake as we scrambled to re-rig.

Thankfully, if not shockingly, he re-surfaced as the last knots were secured to a new pair of snatch hooks. One cast later, the fight returned. This time, though, when he was brought starboard-side, the bangstick met no interference, and the gator was hauled aboard without further incident. Eight feet, four inches, the alligator was a little bit bigger than the average. 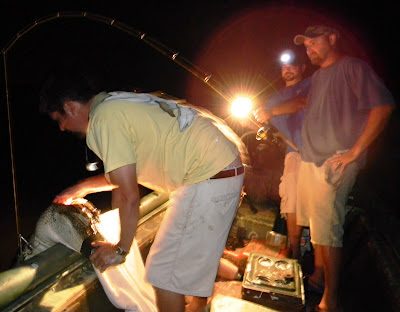 In a sport that requires boats and spotlights and fishing lines, stories like this are rather common. The first phase of gator season is over. When the season resumes, I’ll probably be busy with other pursuits. But what a season so far. I’ve kept tabs on other friends and their excursions this last week – quite the collection of tales of successes and woes.

- Harris took a crew out Monday night. They were mostly novices. After several tries and breaking a rod in the process, they managed to land a small 6-footer. Ready to call it quits for the night, the engine would not crank. They had to paddle 4 miles back to the ramp. At one point an airboat passed by – well, that didn’t happen. Harris didn’t get to bed until 5 in the morning.

- Cole, as someone tends to every year, got a ticket from the FWC boys for not having functioning navigation lights. After the safety check and typical kibitzing over the quality of the throw cushion, the officers were kind enough to point that bunch towards an area teeming with big gators. The lizards were there, but attempts to get one were unsuccessful.

- Jack and Krunk set out Saturday night. They lost a big one early and had seen several other trophy-quality gators. Unfortunately, they too ran into motor troubles and had to use the trolling motor to get back to the ramp. (Jack did end up with a 10'10" and a 9'9" before the phase closed.) 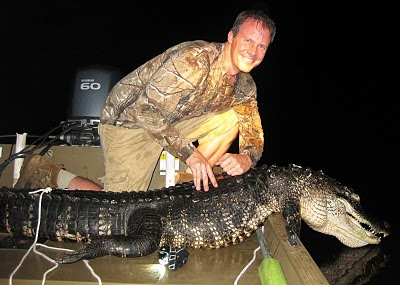 Our best story came Tuesday night. The rain skirted us on the east and west, but we stayed dry. Unfortunately, the storm was shaped like a trawl net, and we were swept up by the southern end of this misery. We hauled rear to a small concrete bridge for refuge from the lightning and downpour. With only four feet of clearance from the lake surface to the underside of the bridge, it was a tad claustrophobic. Worse still was the menacing herd of prehistoric-sized spiders clinging to the support beams.

I’m not a spider fan, especially at eye level. Some of them looked like they could take out a mallard, no trouble. This was as close to being buried alive I hope to ever be. Even that mercy arrives faster, as we were stuck there for around an hour. Who cares about lightning and ravenous gators? Spiders are infinitely worse, in my book. I did not sleep well that night.

If you’ve never been gator hunting, I suggest purchasing a trapper’s tag and buddying up with someone with a permit. If not, there’s always next year.

It sounds very exciting and like something that I might like to try! I've seen on the TV how some people "bow fish" for them. Is that something that can be done down by you?

Yes. Some people use bows and crossbows. I don't have the gear - or bow talent - for that yet. I would need a mentor to see how this is done though.