Yes, I am guilty. I was hunting out of a truck - in a neighborhood, for an endangered species nonetheless. What kind of punk would do this?

Well, this sicko finds it absolutely necessary to go on a photo safari every time I venture to the Florida Keys, and today the camera was getting hot as my quarry was out in force.

The Florida Keys possess some of the most fascinating and unique attractions this country has to offer. From the living coral reefs to the world-class fishing and the history and party life of Hemingway’s beloved Key West, the Keys are an extraordinary destination. It’s only fitting that a truly special species of deer inhabits this paradise. Amidst the mangrove jungles, coral islands, marinas, and restaurants of the Lower Keys lives the smallest of the whitetail subspecies, the Key deer.

Standing only a couple feet tall and tipping the scales at a meager 45 to 75 pounds, the diminutive Key deer inhabits Big Pine Key, No Name Key, and several smaller islands between Marathon and Key West. As an avid deer hunter and student of their habits and history, I can never resist the urge to visit with these wonderful animals when in the area. The fact they are there to see is a great story in itself. 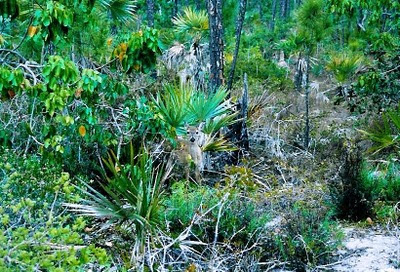 Centuries ago, it’s believed that deer made their way to the tip of Florida over a land bridge thousands of years before the ocean sculpted the state into its present shape. As the Wisconsin Glacier melted, the sea level rose and the Florida Keys were formed, resulting in a population of deer geographically severed from the genetic ties of other species of deer.

In their isolated and subtropical habitat they feed on mangroves, palm berries, and other native plants. With natural freshwater scarce, they rely mainly on pools of rainwater in the limestone to survive. Key deer are the ultimate testament to the whitetail's adaptability. Centuries of hurricanes, sweltering heat, and geological phenomena have been unable to eliminate the Key deer. Man’s influence has been more severe.

Today it’s difficult to imagine the Keys without the tourist traps and hotels, but at one point, the islands served as outposts for exiled Native Americans, outlaws, pirates, and people trying to scratch out a living on the abundant natural resources from the surrounding waters. The deer provided a convenient source of food; however, it wasn’t until Progress made its way to the Keys that the deer population really began to suffer.

The building of Flagler’s railroad in the early 1900’s, an ambitious project connecting Miami and Key West by rail, brought hungry workers and development to the area. After the demise of the railroad in a hurricane, roads were rebuilt and the automobile was introduced to the Keys, consequently bringing tourists and more inhabitants to the islands. The resulting over-hunting and loss of habitat from the increasing human population left less than 40 deer by the end of the 1940’s.

Thanks to the establishment of the National Key Deer Refuge in 1957 and its first manager Jack Watson, the deer’s numbers rose to around 400 animals by 1978. The population dipped again to 250 to 300 animals in the early 1980’s due to another boom in travel and development as a result of the completion of the Overseas Highway, a series of new bridges created to replace the old roads. Due to these low numbers, Key deer are afforded protection under the Endangered Species Act.

Human interaction remains the biggest threat to the Key deer. Deer that have become accustomed to roadside snacks are susceptible to vehicle accidents. Animals fed at houses run the risk of being attacked by dogs, and large numbers of deer that congregate around feeding sites leads to the transmission of disease. To combat these problems, state regulations make feeding Key deer a misdemeanor offense. Deer fences around undeveloped areas have been erected and speed limits are strictly enforced to minimize the potential of vehicle collisions which kills a number of deer along U.S. 1.

Residents of Big Pine Key, whose livelihood is largely dependent on tourism, view Key deer as both a benefit and a nuisance. The money from tourists who visit the refuge is an essential part of life, but day-to-day life activities are interrupted by slow speed limits and visiting drivers seeking a picture of the deer.

Visits from September to March will yield sightings of bucks with hard antlers perfectly proportioned to their dwarfish size and from April to June, does give birth to fawns weighing two to four pounds.

When looking for deer, be respectful of other drivers and locals who are not sharing the experience. The deer are quite approachable and easily photographed from the road, but its recommended people do not exit their vehicles when viewing or photographing the animals.

While I can safely say there will never be a hunting season on these small deer, any deer hunter who travels the Keys for other pursuits owes it to their craft to visit and learn about the Key deer.