Remember those old SAT questions where they’d give you four words like dog, cat, mouse, and toilet and you’d have to choose the one that didn’t fit? I pondered a comparison last weekend. Heat, thunderstorms, summer, deer hunting. After Morning One, you could have replaced “thunderstorms” with “sleeping in” and it would still fit better than “deer hunting.”

It was my bachelor party arranged and assembled by Brother T. Yes, a bachelor party held after my wedding. The plan was to bowhunt a friend’s ranch in Sarasota County for three days. Good man, Brother T. In the mornings and afternoons, stand hunting. During the day we’d drive the ranch scouting and seeking the random hog. The whole premise was exotic. Deer hunting in August! I love exotic challenges.

Now before we start dissecting the negative, let’s address the positives. For starters, it is a gorgeous 8,000-acre ranch that I’m very thankful to hunt. Mostly the open of Florida prairie, the land is flat as a board and dotted with wet-weather ponds, islands of palms, palmetto flats, and scrub oaks stands. The back forty consists of tall pines and broom sedge that is about as close to Old Florida Cracker as I can imagine a place can be these days. Since this is a working ranch, the natural habitat is also broken with a citrus grove and numerous cow pastures and sod fields. Near the Gulf of Mexico, the poetry sunsets are among the best you’ll find in Florida. 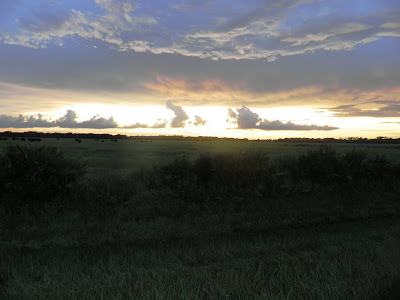 The wildlife is abundant. Hogs churn up the ditch bottoms and creep across pastures. Turkeys flock and run down the roads in front of the truck. Whistling ducks feed in the reeds and sandhills are just about a pestilence in the sod. Deer, once almost non-existent here, swarm the fields in the summer mornings and evenings. Bachelor groups of bucks feed in the wet-weather ponds. The females herd up like pronghorn. Both genders are legal with a bow this time of year, but the main objective was a mature buck in velvet.

I’ve hunted summertime velvet bucks in South Carolina, but that was with a rifle. The bucks there flood the soybean fields in the evenings, and with a scoped rifle this is no big deal. Approaching the Florida Summer Buck with a bow was daunting. For one, narrowing down where the deer would feed is next to impossible with the buffet of goodies available to them. We had corn feeders, but the hogs and turkey are more likely to visit these stations than Mr. Tines. The size of the land is intimidating, too. Without any major contours in the land, the traditional strategies of hunting funnels and similar features were moot. Deer just oozed out of the woods into the fields. Picking a bow stand...just imagine the frustration.

The water was prohibitive. This year’s summer rains had left the ranch soggy. Getting back to the better locales would have been a sticky, anger-the-cowboys mess. I’m thinking particularly of the out-of-the-way pine stands where the older bucks on the ranch tend to hole up.

Really, the primary obstacle was the heat. As one might imagine, it was stifling. Since I can not keep a stand there on a permanent basis, I toted a climber down two weeks prior to the hunt and hung it in a location I’d scouted and knew to be reliable for bucks year-round. Anyone who has used a climber in temperatures over 70 should cringe when I tell them the temperature reading from my truck Friday morning read 82. For me, hunting in the 90 degree evenings was out of the question. I wore a lightweight leafy outfit, a sweat wicking shirt, and board shorts; it still didn’t help much. If that wasn’t enough, the herds of vicious mosquitoes chased me up the tree and were quite enough to induce a Panic Sweat. I may pen a movie script based on this experience. Skeeters 3-D.

Anyway, the Therma-Cell did finally kick them back to a dull roar, and I managed to catch Shut Eye as I waited on dawn. My big plan for the stand location was simple. Behind me was a thick swamp where I knew bucks bedded. Ahead was a green cow pasture and pond where I knew they fed. I sat in a strip of cabbage palms and pines that separated the two regions where they mingled between both.

I’d shaken out C’Mere Deer when I placed the stand. I figured since we were hunting deer on a feeding pattern before the acorn crop, I should sweeten the deal. Could go ahead and name it, C’Mere Cow. After sunrise, the bovines were slipping around the stand, feeding in the long bahiagrass raising all sorts of mooing hell. 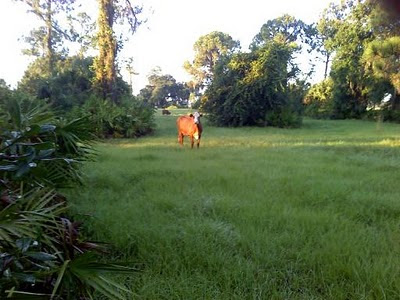 It was a beautiful morning, and as hard as I tried, I just could not get comfortable in the heat and humidity. Then the texts came from the others. No one was seeing much from the stand. Harris missed a small hog – well, he’d rested the lower cam of his bow on his leg before the shot, and his arrow limped out and into the mud. We labeled the incident an equipment malfunction. Not sure if that’s accurate, but we rolled with it. PJ missed a doe on his first-ever bow shot. Sure, the doe was 45-50 yards away. He’s hooked on bowhunting now, though. Brother T had whacked a boar with awesome cutters and wetters that he should mount, but most everyone was on the move back to their trucks. Trace, who was hunting a stand a couple hundred yards away, texted that he was ready to call it after seeing a flock of hens and poults, and I agreed to meet him. 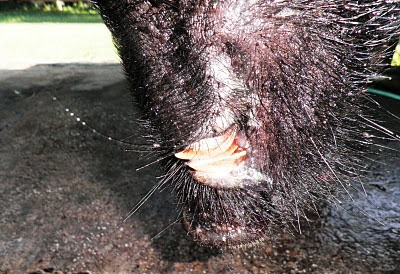 As the weekend progressed, everyone saw antlers, both velvet and hard-horned, but the sightings came from the cabs of vehicles. The enthusiasm of stand hunting perspired out of almost everyone midway through Saturday. The hogs were not cooperating, either. The ranch hired a young cowhand for the summer, and he’d been running dogs at night. Just doesn’t take much pressure before a hog’s ears perk at the sound of an engine. Cole arrowed a nice boar Friday evening, and that was our total swine count for the weekend.

The Florida season starts so early now because of the variance of the rut in the South Zone compared to other places around the peninsula. Towards Big Cypress, Immokalee, and other areas down there, the rut is happening now. The rut on this ranch is in October – sometimes when you’re gerrymandering a hunting zone, you pick the best highway boundary you can and make a go of it.

I didn’t bother to stand hunt again after that first morning. My excitement level just could not be amped up to the appropriate November level. Call me weak, whatever. I never gained confidence in my stand location, anyhow. I thought, perhaps, I’d have better luck cruising the property and spying a buck to sneak up on or come back later with a pop-up blind. It just didn’t work out that way.

I’m curious to spend the next few weeks online researching what others did this summer to tag velvet bucks down south. By the time next August rolls around, I’ll probably be ready to beat the heat again, hopefully better prepared.

And hopefully I won’t have to get married again to create a reason for the trip.

(BTW besides the hunting conditions and wimpiness on my behalf to hunt, the trip was awesome. Thanks to everyone who made it happen. Just a blast!) 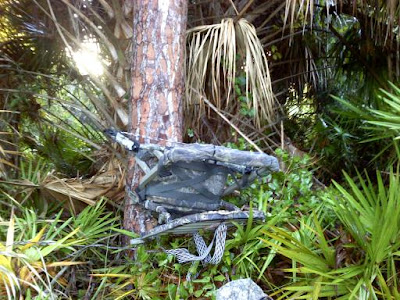 You sir, have a divine way with the bovine!

Congrats again on gettin' hitched and what a cool bachelor party if I do say so myself. Sure bets what the boys do around here!