I figured it was something I should do one day. I’m not a huge fan of bugs or humid August nights, or even really lakes, but as a hunting Floridian, I felt I needed to get with the program and apply for a gator tag. And wouldn’t you know it? I was drawn over a number of other, more wanting applicants. The Forces That Be granted me a 1st Phase, Polk County license. So, it’s incumbent upon me to chapter this whole experience from start to finish.

Though Florida has been offering gator hunts since 1988, the computerized application process was about as primitive as the reptile itself. This year, it evolved. 2009 was the first year the FWC has relied on a random draw. To the best of my understanding, 2008 was a first-come, first-serve debacle. Servers seized up, hunters got angry, and the FWC was ridiculed.

(Honestly though, if they’d not switched to a random draw, I would not have bothered; some may complain, but it is an egalitarian process, that can’t be argued.)

Four of us applied, I was chosen. We selected 1st Phase Polk County as our first choice, Lake Hancock 2nd, Lake Parker 3rd, and Polk County 2nd Phase fourth. We really didn’t read the rules well for the Polk County tag, though, which restricts the permit-holder from hunting in lakes that have their own set number of tags - like Hancock or Parker - meaning that though they are in Polk County, these lakes were off-limits to us. We assumed otherwise. Oh well, we live in lake-infested central Florida, we should be able to find some public or private pond with a lizard in it. 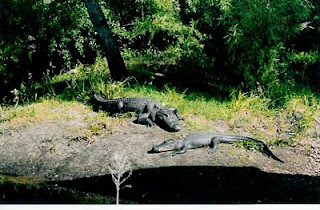 Each permit allows the hunter two gators which must be properly reported after harvesting. Additional hunters may assist the permit-holder, but only after purchasing an additional alligator trapping agent license. Really, this is a team sport. Our hope was for more than one of us to draw tags to increase our harvest. As it is, two gators is a lot of hide and meat.

While the actual act of filling out an application was simple and straightforward, waiting on the results was somewhat maddening. The FWC, in a classic governmental screw-up of establishing a deadline that can’t possibly be kept, was a bit late to reveal the results of the draw, eliciting howls of derision from the faithful on Internet forums. Never mind the fact the FWC had to sort through thousands of applications and enter them into a brand new system, the agency endured the cyberspace equivalent of being dragged into the streets and flogged.

And true, I was anxious and frustrated too. At first it showed I didn’t even apply. Then the computer – which I became openly hostile to - said I’d been drawn, but not for what phase or lake. Scouring the Internet forums, tales were being spun of some applicants pulling two permits, a tauntingly evil glitch, and others going to pay for what they thought was a successful draw, only to be denied. I’m guessing other computers were being cursed at besides mine. A mass e-mail was sent out Friday the 19th assuring applicants that yes, there were problems, but FWC was fervently working to amend them, and thanks for your patience.

By Monday the 22nd, the waters calmed and the ship seemed to be righted. I paid for my tag and eagerly await the information packet and CITES permits in the mail. I’m strongly considering attending the optional orientation meeting at the fairgrounds in Tampa for no other reason than to watch the vindictive crowd verbally assault some poor biologist over the system screw-ups.

I’m not one to dive into an endeavor like this without some research on where to go, and what to expect. Unfortunately - and yes, I will blame the FWC for this - I didn’t find help to be a common commodity. My biggest query was to discover which lakes in Polk County we could hunt without leaving in shackles. The Polk County permit allows the holder and his agents to hunt public lakes, but they must be outside city limits. I guess the good citizens around Lake Hollingsworth would be troubled by bangsticks torching off at midnight. I had my guesses on where to go, but really wanted a Voice of Authority to tell me yes or no.

I e-mailed the FWC for some help to which, a week later, nary a reply. I called the Lakeland branch of the FWC thinking they’d be of the most help. Instead, I was told to contact – wait for it – the Polk County Sheriff’s Office (!), where the woman in animal services was more than flabbergasted by my request. She did, however, direct me to the agriculture division, and here’s where I found some help.

I discussed a few potential hunting locations with a gentleman who knew a great deal about the gator hunt program. He seemed amused by my depth of questioning, and at one point even asked if I’d ever been in trouble with the Man in Green. I told him no, just minding my P’s and Q’s. We tossed about ideas, and I hung up the phone wanting to send him a bouquet of flowers for his assistance.

He also shared with me a website with data about all the lakes in Polk County – Polk County Water Resources Atlas. You could learn just about anything you’d ever want to know about a particular body of water in Polk County. Other than, of course, the number of gators that are in it.

Have you hunted gators before in Lake Pierce in Lake Wales (Polk County) Florida? If not, do you know anyone who has? Please reply to elisa.klingler@yahoo.com with any leads/advice/tips. I could sure use some help! Thanks!

I'm sorry, I have not. If you're not having any luck in the evenings, you may try hunting the mornings. It's proving successful for us.