To the Squirrels or Whatever

Ummmm....there's nothing I can write here that won't make me sound like an insensitive plod, but what the heck?

In semi-related news, a raptor rehab center down the street is also suffering from suppressed feeding funds. Just saying. It's only gonna get worse when oil-covered squirrels start washing up on the beach. I heard the squirrel that chewed through the transformer causing the power outage in Mulberry last week made it here. Nicknamed him Sparky. 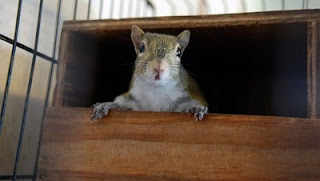 In full disclosure, I did raise a baby squirrel when I was young. It fell out of a tree, and I weaned it back to health on evaporated milk. When it got old enough, it ate everything. After a few months when it could run and play and bite like normal squirrels, I released it at my friend's house. Here's hoping it found a natural supply of peanut butter.