In the last three or four years I’ve really come to enjoy hunting with a muzzleloader. The reason is simple - I’ve been pretty successful in that time. The reason I’ve been successful is that my rifle has actually shot when aimed at live game. This hasn’t always been the case.

My first frontstuffer came to me wayyyyy back in 1998. It was a .45 caliber sidelock that my grandmother owned. I ran the loose powder, pushed the patch and ball down the barrel, and prayed the cap would spark the charge which it rarely did. It was maddening

No doubt this was my entire fault. All the literature I’d read about muzzleloading said to keep the weapon firing reliably took great care, and most 19 year olds don’t keep great care of anything. I did, however, manage to fire off three successful shots in a row at a very dumb spike before grounding him with the fourth. The Confederate Army would have been proud of my reloading skills and profanity in the interim.

The next muzzleloader was one of these fancy inlines that traditional hunters abhorred – maybe still abhor. You pulled a bolt straight back and on the pull of the trigger, it slammed forward on the primer. Equipped with a musket cap nipple, it did fire with greater reliability than the sidelock. Problem was it couldn’t hit the broadside of a bull elephant. I’d learned how to keep it clean, fed it powder pellets, and stoked it with expensive sabots that would allegedly extend its range out to 150 yards. Not that this mattered when it couldn’t hit paydirt at 40.

I missed a great boar with it in 2001. Following year I missed a doe. And finally in 2003, sitting in a very hot October treestand, it failed to fire on an eater sow that walked up to a feeder. The gun was lucky it wasn’t wrapped around a tree that day. My dad has gone on to miss several deer with it since.

Enough was enough. One fateful day I walked into the Bass Pro Shop in Orlando and purchased a Knight Disc Rifle. This was a thoroughly modern outfit. A closed bolt protected the disc and 209 shotgun primer from the elements. A heavy rifle, it lessened some of the blow from the .50 caliber projectile, making it easier to shoot. Stainless barrel, synthetic stock, and fiber optic sights – Davy Crockett I am not. I topped it with a Bushnell Banner 3-9X 40 scope and was ready to roll.

Unfortunately, it wasn’t. The 209 primers would leave a ring of crap near the breech, ruining bullet seating after the first shot. Groups on paper looked like you’d spun me around in circles on a baseball bat before firing. I just resigned myself to believe blackpowder hunting wasn’t my bag.

A couple years later I ran across an article detailing this very problem. Remington – many thanks to them – introduced the Kleanbore primer. Topped with two of Hodgdon’s 50-grain 777 pellets and a Barnes-250 grain Expander MZ bullet, I was large and in charge. It was like in Jeremiah Johnson when he found Hatchet Jack and his Hawken. Went from starving to Happy Pilgrim. 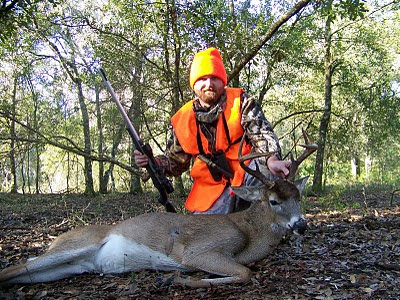 My first kill was a Cedar Key coyote. The next, a solid Manatee County 8pt. Two years ago I plugged a small 8 and two fine hogs, including a 100 lb. boar that literally rolled into the palmettos he was hit so hard. Never a miss or a misfire. And it was then I learned to enjoy the cap-and-boom-and-smoke sensation of hunting with a blackpowder rifle.

(Knight has since, tragically, gone out of business. Luckily I have enough of those orange discs to last generations of Nance hunters to come – assuming one day muzzleloaders aren’t ignited by lasers.)

Now, some, and rightly so, will argue I’m violating the original intent of the blackpower season, and this rifle isn’t much different than hunting with a centerfire. Really, I’m OK with this. One day I’ll probably sneak back to a sidelock – and I’ve seen some modern flintlocks that really intrigue me – but I only have so much time to hunt, and I want my rifle to fire and fire accurately.

So there we go. I’ll never pretend to be an expert on the subject, but here are a few tips to pass along for those looking to extend their season or play around with a new hunting tool.

1. Keep your barrel clean in the offseason – the new propellants that have largely replaced true blackpowder burn cleaner, leaving less corrosive residue. But, the plastic of sabots can gum up a barrel. Point is, pay close attention to your barrel. Clean it soon after season is over or after extended shooting periods. If not, I’ve had breech plugs become so stuck I thought the gun would be ruined.

2. Figure out how much/how often to clean – some more in the know than I may fall out of their chair reading this, but I’m very casual about cleaning during the season or at the range. Run a jag, sure, but I’ve fired numerous shots with little accuracy problems. Maybe I’m just lucky, but these newer guns and projectiles just aren’t as picky as they used to be. Now, if you’re looking to shoot small groups to impress your friends, you may want to rethink this.

3. Mark your ramrod – when you seat your first charge, take a knife or marker and make a line on your ramrod. In the future this will serve as your gauge to ensure your bullet is seated at the correct depth or that there is no other charge down that barrel, Mr. Three Fingers.

4. Check the local laws – In Florida, pretty much anything goes – scopes, sabots, whatever. Not all states are so forgiving. Last I knew Georgia didn’t allow scopes. My rig has detachable mounts for just this purpose.

Other than that, there isn’t a whole lot more I can think of at the moment; it’s like hunting with any other tool. Know your limitations of what you and the gun are capable of.

There is one thing, though, that’ll get you excited after a few muzzleloading seasons that other methods of hunting sorely lack – that acrid smell of sweet smoke that lingers in the dry fall air.