We were bumping south on a dusty berm road in Hardee County, taking a midday drive around the property before the time arrived to roost gobblers. At a ninety-degree turn in the road, ahead we spied a sow and her orange and black piglets feeding on new-growth grass on the border of a pine and palmetto thicket. This buffet of grass ran a few hundred yards along the pines; solid chance another piggie or two could be in the open on this cool Spring day.

I exited the vehicle and snuck through the tall dog fennel until I could glass the length of the opening. Standing with another sow was a large boar. 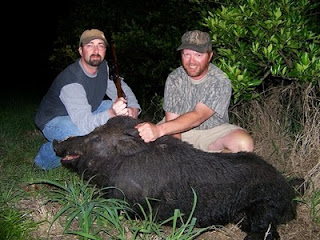 From 75 yards, I could see the Mick Jagger curl of his lips and the dried, graying mud caked across his black back. His ample manhood kept his tail from falling between his thighs. In short, he was a shooter. What fortune!

The crosshairs of the Browning BAR settled on his upper shoulder. The trigger came tight, and the mud on his left shoulder exploded as if a M80 had been ignited in an ant pile. Perfect shot! The hogs scattered, my boar ripping into the palmettos. The sow with the babies stampeded around, snorting and agitated until all her offspring retreated to safety.

I never found that hog. We scoured the palmettos for blood smears and wandered down several trails but came up empty. This was no novice group searching for spoor. Of course, with a wounded boar and the angry momma sow nearby, trailing with a discerning eye was a might uncomfortable. Terribly disappointing.

Wild boars possess what rappers and rhyme artists spit about these days – swagger. It’s that attitude of being a bad motherscratcher. The swollen shoulders. The toothy sneer. A mature wild boar is a stud, and you know it when you see him. Adaptability, body structure, and demeanor all play a role in the wild boar’s rough reputation. Besides bovine and the occasional black bear, the boar is liable to be the biggest beast a Florida hunter will happen upon in the woods.

And wild hog hunting is a staple of the outdoor business in the Sunshine State. For the sake of this column, though, let’s not worry about sows and lesser boars; let’s think trophy, for a trophy hog is one of the Wild’s finest prizes. A true monster ranks, in my book, right up there with a boss gobbler or a ten point buck. It just does not receive the same respect in certain hunting circles. This is wrong.

Let me explain why.

One, wild hogs, where they are hunted regularly, are among the most persecuted of Florida’s game animals. (OK, technically, they aren’t defined as game animals in many places, but you know what I mean.) They can be hunted year-round on private lands, and cattlemen and ranchers despise them, which means they aren’t exactly trophy managed like deer or turkey. More than one rancher has told me a good hog is a dead hog. Corn feeders, night permits, dog hunters – it’s a free-for-all for private land swine.

On public land, they get as pressured as deer and react in similar fashion. Adult boars seek out the deepest hollers when the guns pop off. Hunters may waylay sows and small boars, but the big boys are few and far between at the check stations. Then, when they think they are safe, on many WMA’s packs of mutts run ‘em around the swamp in fights to the death. The wild boar is a marked man, and the law affords him far fewer protections than a deer.

Next, while hogs may not be savvy like deer or ultra-tense like turkey, mature boars are no dummies. They are adaptable and quickly figure out how and when to adapt. Their eyesight is pitiful, but their sense of smell is unmatched. You may still find plenty of sign, but an over-hunted hammock or corn feeder will soon be vacant of daylight swine. A hog’s hearing is more than adequate; I’ve witnessed some large boars react to vehicle noise from surprising distances. Most people think of hogs as dim-witted because they are used to seeing and shooting naive 80 pound sows.

Also, finding a set of trophy teeth is difficult and depends a lot on luck. Thanks to the various genetic influences that comprise a boar’s DNA, large hogs may not grow tusks to brag about, especially if they are a generation or two removed from Ol’ McDonald’s farm. Teeth can be broken and nigh impossible to judge unless a cur is holding a boar by the ear. Field judging a boar’s trophy potential usually occurs when you are standing over him.

Finally, the largest boars are allergic to daylight. The prime times - aside from instances like my opening story – are right at first light and just before complete dark. Without a doubt, dog hunters routinely pull the biggest hogs from the midnight woods. But gun and bowhunters are more than used to flipping through game trail photos and seeing that rascal mowing down the corn at 2 AM.

(I shouldn't have to spell out the trophy value of a boar any further now, do I? Seems we've covered the variables that define any other trophy - relative scarcity, difficulty to hunt, and luck.)

Naturally, boars are not specters or inviolable goblins. Next time I’ll offer some tips for hunting down these critters. To each is own, but I still think the wild boar commands a little better press than he currently receives.
Posted by Ian Nance at 5/11/2010 08:15:00 AM

A lot of really good points. Hogs are not near as easy to kill as most people think.

They can be harder to find than kill. They don't bleed all that well. The hog in my story was shot with a 130 gr .270 Ballistic silver Tip. Hit it in the right spot, but doubt it penetrated far. Certainly no exit wound.