The thing about hunting wild boars is they’re tough to pattern, and the advantages hunters experience during fall deer or spring turkey seasons don’t really exist. Boars don’t rut, per se, and I’ve never seen one strut. What I’m trying to relay is, boars don’t possess those vulnerabilities other male game animals do. Harvesting a trophy wild boar really relies on a lot of variables lining up in your favor.

Last time I wrote about hunting boars, I discussed their virtue as a trophy. Some may disagree – a few did – and that’s fine. They may leave now. For those of you who want to learn more, let’s do a little brainstorming session on how to catch up with a prize pig.

Let’s start with their vulnerabilities. One, boars don’t rut, in the classic deer sense, because sows come into heat at throughout the year. That magical week or two when trophy bucks go nuts, doesn’t occur for the trophy boar. He gets his any time, day or night. 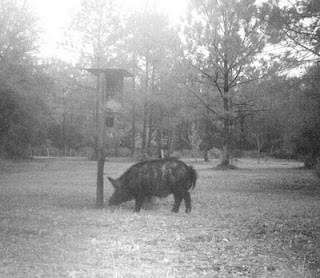 This doesn’t mean you shouldn’t stay vigilant in the presence of the lady-folk. Hanging with the kinder gender is always an opportune chance for Big Boy to come sidling by. Of course, it will behoove you to lay off the trigger finger until he does.

Ahh, but finding the females can be an issue in and of itself, especially on properties where they receive healthy diets of lead. Also, more often than not, the boars nosing around herds of sows lean towards the juvenile, college kid-like demographic. Not all that bright about things, but think they’re tough. I've pulled some big teeth out of this category, sure, but usually his cutters are short little things.

If nookie won’t do it, what’s the other way to a man’s heart? Food! Yes, sir. Oak hammocks in the fall are solid places to start. The thicker edges of wet-weather ponds in the summer. Palmetto flats in the winter. Fresh, new-growth grass patches in the spring. And the ladies are sure to be there, too. Corn feeders are money but are easily over-hunted. Orange groves – if you are allowed to hunt an orange grove in the fall or winter and want to kill a big pig, hunt this area viciously. The cover of the trees and the grassy irrigation ditches that run down the rows give hogs a false sense of security. Plus, they don’t mind chowing down on an orange or two. For that matter, any agricultural area is worth checking out.

Ahh, but a mature boar is more likely to feed at night, as is their nature. You could glass over hundreds of pigs in a lot of these places and not find that stud for the wall. I guess you could just give up, shoot a younger one, and have the taxidermist pull his teeth out a couple inches, no one would know.

OK, I’ll give my best secret on big wild boars – get some place you can see a fair distance so you can glass. This can be tough in Florida, but stay with me. In the very early moments of morning, wild boars will be trotting back to whatever hell-hole cover they hide in during the day. A lot of times, they’ll travel across the wide open to get there, whether it is a palmetto flat, sod field, or cow pasture. You probably won’t have a whole lot of time to shoot, but at least you can get a glimpse. If there is one pattern-able trait of these animals, it is boars tend to run the same routes in the mornings. Find the signs – rubbed trees, large tracks, and scat on well-worn trails. My first boar of any size was shot on a sand-tailing pile at a phosphate mine way back when. Looked like he was crossing the surface of the moon, but upon closer inspection, I could see the trails of years of hog crossing, and the rubbing posts where they would hit the heavy cover. Just this last spring while turkey hunting at Chassahowitzka WMA, a super hog wandered across an open burned pine cutover and down into the swamp first thing in the morning. 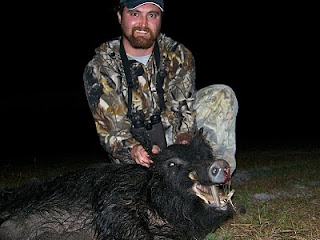 In the late evening hours, get back on those binoculars and scour the edges of swamps and hammocks and other feeding areas. Edge territory, as it is with deer, is very popular with boars. My biggest boar to date, the one that lords over my trophy room, was killed feeding along a trail on the edge of an oak hammock and a stand of palmettos it would take a bulldozer or a crippling case of insanity to get through. And I had seen him several times in this area during deer season, but was just too focused on rutting bucks to pay him mind. I remember, too, a few falls ago sitting in a hammock staring at a monster feeding right at dark on the edge of a grass field. Couldn’t thread the bullet through the small pines between us, but found later the obvious trail he used to get in and out of there.

As I said in the beginning, boars are difficult to pattern and aren’t compelled with stupidity by limited breeding seasons, but they do succumb to the same factors that lay low bucks and gobblers every year – sex and food, and some habit that satiates these two desires.

Great post! Someday I am hoping to get a crack a a hog of my own and the info you've given me is going to come in handy. Thanks!

interesting. love to hog hunt when I can find a place. getting harder without joining a $900 ayear lease. but thanx for the info

Hope they work better than my turkey tips, Kari.