To The Jersey Devil or Whatever

I had no idea there existed a scaly, demonic beast that terrorized the residents of New Jersey - at least one not named "Snooki."

I love mythology and creature features of all breeds. Spent many a morn in the stand letting the imagination roam, hoping Bigfoot or Chupacabra would wander by my ambush. Best I've ever gotten was drunken poachers, but I remain vigilant, though I haven't approached the subject of what I'd do if this happened. Wet myself is as good a guess as any. 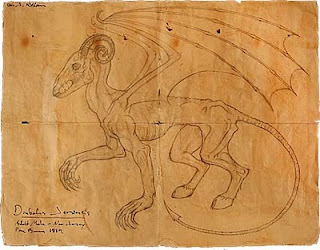 My fascination with otherworldly wild things kept me dry and shoreside for years until I mustered up the intelligence to realize a long tentacle wouldn't snake out of the depths and yank me into a beaky maw. Took me twenty-some years to reach that point, but mission accomplished.

But who is to say what really dwells in our forests and oceans? The experts? The same people who tell us panthers don't exist east of the Mississippi or north of Florida?

The coolest thing about the story of the Jersey Devil - besides the mutating potential of the soil, where are you, Erin Brockovich? - is some think this hideous fiend may be our very own soft-eyed whitetail with crazy antlers. Makes sense to me. Folks once thought manatees looked like mermaids, too. But here's hoping this theory is never proved.

That's interesting to know that people think the "jersey devil" might actually be a whitetail deer. I saw an episode of monster quest about the jersey devil, cool stuff.