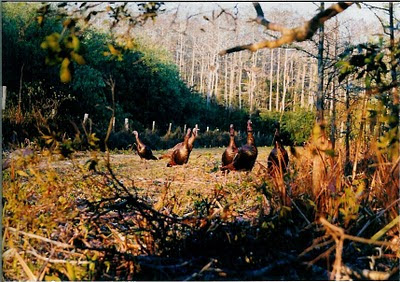 For turkey hunters in the South Zone, start your engines, people. Of course, I seriously doubt you needed my reminder. This date has been on your mind for months. But yes, you are a-go on the 1st.

With the way the weather has been yo-yoing between cool and warm conditions every couple of days, I am looking forward to hearing some reports from down south on how the gobblers are responding. Generally, the earlier the warm weather, the earlier the birds are breeding. Cool weather knocks it back. Of course, farther south, this is not as much as of an issue as in other parts of the state. Maybe I’m just excited to talk turkey once again.

Two weekends ago in Manatee County, I found two separate gobblers, each on the edges of an oak hammock between a palmetto flat and river bottom – a perfect strutting area. Unfortunately, most of Manatee County is in the Central Zone, as is this place. I don’t have a tag here anyhow, so I guess the point is moot.

It has been three years since I’ve hunted in the South Zone. The last trip was on an invite to private property south of Immokalee. The person who invited me is no longer a member of that lease, so I doubt I’ll ever see the place again, but the memory of that hunt is not going away for a long time.

We rode down a few days before the start of the season and made it to a camp on the edge of a bromeliad-infested swamp that looked like Skunk Ape could have wandered out of it at any moment. The weather was pleasant, and we knew where a boss Osceola strutted from a previous scouting trip. The plan was to set up blinds early so when the other members of camp showed up, we were prepared to tell them we’d staked out our zone.

Now, let me tell you, the majority of people in this camp were not serious turkey hunters – Weekend Warriors, actually. Spring hunting meant driving around in swamp buggies all morning. Fun, yes, but not the most effective way of bagging a bird. We wanted them as far away from our set-ups as possible.

So we built blinds and did some additional scouting. Strolled through some of the dried-out strands in the area looking for orchids. So close to the famed Fakahatchee Strand, we talked about the rare ghost orchid. We found bear tracks in the dirt road leading into camp and panther tracks on the edges of a large cattle pasture as we did some preliminary hog hunting. And snakes, well, I prefer not to talk about them. Even after years of hunting this state, a wilder place in Florida, I have not been.

The opening morning of season was not so memorable. A lot of gunshots from our Rambo friends – came to find out later someone was shooting at running pigs with a .45ACP pistol from a swamp buggy. But, I could hear that ol’ boss gobbler we’d scouted hollering in the trees ahead of me. At flydown though, he wandered back into the swamp.

That evening, Travis and I set up in a hammock of some of the strangest looking trees I’d seen, which unfortunately, the name of them escapes me. The important part though, was the clearing in the trees where we hoped we could lure a gobbler. Before we set out, one of the guys in camp asked if we were heading out to roost a bird. In unison, Travis and I replied, “No, we’re going to kill one." 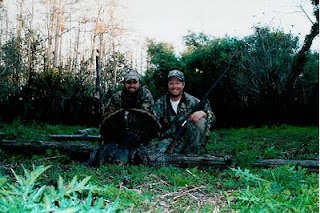 After fifteen minutes or so, a turkey flew into a tall pine on the edge of our strange hammock. Rested behind and to the right of me, I couldn’t see his red head until the sun hit him just right. I urged Travis to yelp a couple of more times, and as he did, the tom flew down, and I rolled around on my stomach simultaneously.

Just barely could I see the front of the tom’s head around the trunk of one of these trees. I whispered to Travis to cluck once more. The gobbler took three steps forward, and Travis ran to the dead bird before the smoke from my shot even cleared.

We brought out the camera and bipod, snapped photos, and laughed our way back to camp before the sun had even started to dip towards the horizon. At the shack, the tom was hung on a lodge pole, drinks were poured, and yeah, we showed off a little bit without being too obnoxious. We’d gone to kill one, and once in a while it’s nice to at least sound like you know what you’re talking about.

The next morning I returned to my blind where I’d hoped that big gobbler would stop for a visit. It wasn’t to be, though. As the day warmed, I heard the sharp cluck of a jake to my right. A couple of minutes later, nine red heads poured out of the swamp, no more than ten yards from my outstretched legs.

They were all jakes, and to take one after shooting a gobbler the night before seemed to push a little hard on our host’s graciousness. Fortunately for them, this was my mindset. They sure tempted fate. Instead of walking away, they wandered under the myrtle bush where I was sitting, the nearest one now inches from my black rubber boot.

If I wasn’t going to shoot the shotgun, I’d give my camera a try. Slowly, I pulled my Canon out of a pocket in my hunting vest. The birds seemed concerned, but with the sun sitting directly on my shoulder, they couldn’t get a good bead on my movement.

I snapped my last shot on the roll of film – I’ve since gone digital – and the jakes scooted amongst the decoys and finally away, leaving me with a memory and a photo that remains one of my best trophies.

Ah, turkey hunting, you never know what each morning will bring. To those of you packing your gear and heading south this weekend, best of luck. Hope you capture that unique memory of your own!!!
Posted by Ian Nance at 3/15/2010 03:03:00 PM