Just read this excellent article by Don Mulligan over at ESPNOutdoors.com about urban deer overpopulation. 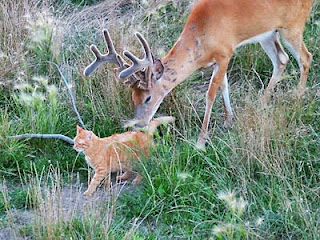 The mainstream media somehow overlooked news of government sharpshooters being summoned to the grounds outside the Camp David presidential retreat in western Maryland last month. Had the shooters been deployed to quell a terrorist attack or put down some sort of coup, the lack of coverage would have been shocking.

When it became apparent the invading horde they were sent to suppress consisted of a bunch of whitetail deer, however, no one was surprised.

Like nearly every governing body charged with managing an urban area in the United States right now, the Oval Office is having its own deer crisis. And as they enter that battle, they are likely finding that taking care of urban deer overpopulation is as complicated and controversial as passing healthcare legislation.

This problem just isn’t natural to FL. Yet. Sure, suburbs of Orlando and elsewhere have their cases of marauding, flower-eating whitetails, but for the most part we are too occupied with alligators showing up in the swimming pool.

But this is a large issue up north. I’ve seen them in suburban Cincinnati and other parts of Ohio where I have family. Big deer, too. My aunt occasionally sends photos of Booners walking across her backyard.

Anyhow, we all know the problem with control right? Anti-hunters fight initiatives for a regulated harvest. Contraceptive methods are expensive and largely ineffective. And you can’t just turn loose large predators in neighborhoods to prey on the herd. Some forward-thinking communities have fought through this mess, established hunting seasons, and should be commended.

Go ahead and check out the article. The only thing missing is information on where to sign up for some of these urban hunts.
Posted by Ian Nance at 3/17/2010 06:01:00 PM