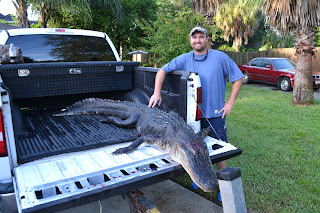 Some folks want to blame Swamp People, but I think things were trending this way anyhow. Florida Gator Hunting has really jumped in popularity over the last five years. The hunts are exciting. They don’t interfere with other hunting pursuits. And up until recently, they’ve been pretty accessible. Now the may have a burgeoning gator problem on their hands. Not one where they have to remove a reptile from a pool or dislodge a poodle from a gator’s gums, but with their hunting program.

Perception is reality to a mob. After the 1st round of drawings went down a few weeks ago, you could hear the torches flaring and the grinding of honed pitchfork tines. All kinds of wild accusations were flying about from the unsuccessful, from accusing the of favoring non-resident applicants because they pay more for their permit - $1022 to $272 for residents – to suggesting gator guides are gaming the system by submitting applications for all friends and family members fit for a late-night gator chase.

Indeed these are pretty reckless claims without proof. And this year has been tougher because demand has increased while the number of tags was diminished because of drought conditions. Anecdotal evidence an effective argument does not make, but I do have frustrated friends who have not been drawn in years of applying, and I suspect others do, as well. If these folks are applying for tough-to-draw lakes and zones year-in, year-out, then reason stands that the odds are never in their favor.

My method of applying is about the same as the NFL Draft. Everyone gets five picks per application – I try to apply for the top-shelf talent first and second. The third and fourth picks are reserved for bigger lakes with more tags, and the final is left for the less desirable licenses, like my fourth-season tag I paid for the other day.

But a few changes could really help assuage much of the clamor associated with this process and give everyone - well, almost everyone - a better shot at yanking a prized permit.

1. Institute a preference point system. I’d like to see points awarded to unsuccessful applicants weighted on whether, let’s just say, a person struck out on their first 3 picks. Assign 3 preference points for the 1st pick, 2 for a second pick, and 1 for a third rounder. Over time this will allow folks to eventually pull that coveted pond nearby with only two permits. They already use preference points for other quota hunts in the state – it couldn’t be that difficult to get it going for gators.

2. Designate a certain number of tags for residents and non-residents. As it stands now, I have the same odds of drawing a permit for a local lake as someone from does. Nothing against non-residents and no xenophobia here, but there’s a real problem when residents can’t access a local resource because of out-of-towners, even if this is only an imagined problem. This model is used in many areas in the West for desirable big game tags, and there’s no reason it shouldn’t be employed here. Maybe split the privilege 70/30 in favor of residents.

3. Adjust the Phase II application time. Not everyone was excited about going to a random draw system a few years back, but it was a relic. They continue to operate under a 1st-come, 1st-serve design for Round 2, but it starts at . Now, I paid for my tag so I’m ineligible anyhow, but I can tell you exactly where I’m gonna be at ten tomorrow – work. Maybe move it up to or so.

Look, it’s never going to be perfect, but the does a pretty good job of listening to stakeholders and making sure all available permits are divvied amongst the crowd. Not everyone will draw a tag, and, believe it or not, gators are a limited resource. This is not an extermination program, rather a recreational one.

Gator hunting is great sport; there just needs to be a few wrinkles ironed out in the application process. But, hey, even if you don’t get pulled, you can always buy a trapper’s agent tag and participate in a hunt in which someone else drew the CITES tags and right to pay the 300 bones.

In a few states where hunting is allowed on a few prime State owned parks for 1 week only, they use a system where, if your name is drawn for a tag and you fill your 2deer quota. You can not reapply for two years. When submitting for the drawing, you must pay 1/4 of the permit fee up front with no refund if not picked. Those who do get picked, only pay the balance with-in a certain period.
Any permits not paid for in time, will be put into another drawing of names not picked in the first round. Since there are limited sites to hunt and double or triple the amount of hunters applying, they are only allowed to hunt on odd/even days, depending on the last digit of the permit number. Odd numbers hunt on Mon., Wed. and Friday while the even numbers hunt the other days. New Jersey has been doing this for about 30 years with no complaints. One thing though. As parking is a problem, each hunter must also submit their vehicle information, how many are in their party, including non-hunters and guides if used and must park that vehicle in their state assigned parking area. They are also given a tag which must be set on their dashboard with the information visable.

Ian, if you don't get your lizzard just come on up and get the one who has shown up in our neighborhood pond. Better hurry though!!

I agree with the preference point system. It works well in many other states. If "unsuccessful", then FWC keeps a small portion of the license fee for your preference point. This is how it is done in Iowa. By making all applicants pay for their tags up front, will reduce some of the applicants, especially those that have every distant family members name in the hat. Great post buddy!