To Catch a Coon - Trapping for Land Management 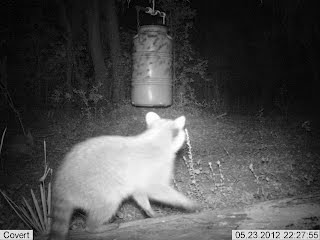 So, I’ve become a trapper - at least the furbearers permit claims as much. Not the kind of woodsman extraordinaire who snares beaver to trade downstream for supplies and women to keep him warm during the winter. Or one who runs a line to make an extra dime on coyote or bobcat pelts. It’s a straight-up management attempt to rid our small lease of a few raccoons.

Throughout turkey season I noted hen tracks in the sugar sand trailing from the adjoining property to the west into ours. With a lack of tall trees, they almost certainly do not roost on our land with any regularity. What occurred to me was the hens were visiting our weedy, brushy, scrubby land to nest. It is an ideal locale to do so with an abundance of sedge and palmetto and gallberry that offers not only nesting shelter but plenty of bugs for the precocious poults.

Ideal albeit one caveat: The Raccoons.

A couple months ago I wrote about the booming coon population on our lease, their thirst for destruction, and our feeble attempts to dim their flames. The property is surrounded by orange groves and a swamp bottom, a veritable raccoon Nirvana. Since that post we have implemented a serious trapping program.

Well, let’s start from the beginning. I’ve never cared too much about trapping largely because there’s never been a real call to arms. Sure, most properties I’ve hunted host large numbers of egg-stealing predators, but either trapping was not allowed, such as on WMA’s, the properties were too far away to ethically run traps, or the situation just didn’t call for it. The first two elements are easy to explain – the last is the sticky wicket.

You have to decide whether trapping for management is worth your time, and I mean this in a couple of different ways. One, will your property benefit from trapping coons? Large tracts of land with an already-healthy turkey population will probably only realize minimal results unless you can dedicate many, many years to a trapping program. Which brings us to another point – do you have the time and resources to be consistent with the routine of keeping traps baited and dispatching the caught week in and week out? If not, you’re probably just spinning your wheels.

But back to our place. It’s a mere 140-acres, and there is a no-question surplus of ringtails. The turkey population is only starting to creep back into this part of having been pushed out years back by mining, citrus and other factors. There are birds around; with a little help, there could be more in the coming years.

Now, again, it’s tough to predict if our efforts will pan out. Our neighbors aren’t trapping and coons breed rather quickly. On the plus side, coons will travel good distances seeking food and mates; there should be plenty of targets. The trick is to stay with it.

To begin, we used live traps near the corn feeders and baited them with tuna fish and dog food. This promptly wiped out 10, but the survivors soon grew wary of the cages. We needed a foothold or snare of some kind. The only problem with this – especially in – is the possibility of catching an endangered something or another. Like a fox. Gray fox are protected here, and last thing I want is to find one in a foot-hold and have the man ready to write me a ticket. The cruelest thing he could do – to me and the fox - is have me release the creature. Hard to say who’d come out on top. 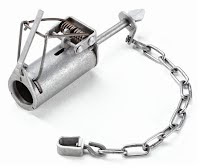 To remedy this, I purchased a pair of Duke’s Dog Proof Coon Traps and deployed them by a spinner feeder that had not had a live trap near it yet. The trap is a hollow tube with a trigger in the back. Its opening is just big enough for a raccoon’s or possum’s thieving paw, but if a coyote stuck its muzzle in there, it wouldn’t be able to set off the trigger. Same if they happened to step in it. The prey must reach past the trigger and pull it forward to spring it. It looks and sounds a tad gimmicky but nothing machined from steel tends to be. Same here. Neat design.

You’ll want to rig the trap with cable and secure to a tree. To set the trap, squeeze down on the spring-lock mechanism. Have a wooden dowel handy and stick in the trap to keep it open while you set the trigger. The instructions suggest marshmallows for lure, but I suspected the Florida heat and fire ants would ruin this, so I baited them with dry cat food and leftover fish-fry grease to sweeten the pot.

With people checking them every couple days, the first week we caught a possum and a large boar coon that probably should have ended up in my trophy room. The second week found two more coons. I’ll give the Dukes a few more days to dine and relocate them to other pieces of the property. They are efficient. I’ve been using my North American Arms .22 Mag derringer for the loud work – which is the highest employment I can justify for even owning that pistol. 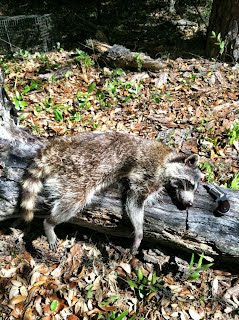 The reality is I’m picking off the easy ones; the time is fast coming when trapping becomes more of an art form and strategy of woodsmanship. I’ve done research on both setting traps and trapping coons and feel I own a plan. I’ll look to place one trap near the swamp along trails coon sign and rotate the other between crossings from the orange grove with corresponding spoor. Sounds like a plan, at least. Let you know.

It’s too early to tell with turkey, but I will testify that it’s helped with the deer. Over the last few months I’ve struggled to capture whitetails on the Covert Camera by my bump feeder despite keeping the barrel slap-full of corn and dumping bags around it to chum up the area. All this produced were thousands of pictures of raccoons.

Within a week of removing the traps – and a half-dozen pests – I have the raccoons running scared and the deer happily grazing. I’d long heard that coons would keep deer from the feeders, but it was amazing to witness how quickly it worked.

So think about it. Trapping is not for everyone – personally and functionally on a piece of land. But in the right setting it can be an effective land management tool to improve turkey populations and deer hunting.

We started trapping foxes a couple years ago. Our farm was so overrun with them that there was not a rabbit to be found. We love running beagle dogs but also like rabbit hunting too. Our first year trapping, we caught about 12 foxes on the 60 acres we hunt. Needless to say, we now have rabbits again ;)

It frustrates me because most people think you trap to be cruel and there's no reason for it BUT there is. I agree with you, it needs to be done for land management.

Good stuff. Would love to read more on this topic. Would you happen to have any blogs on rabbit hunting? I am very new to hunting and planning to start with small game and using my 22.