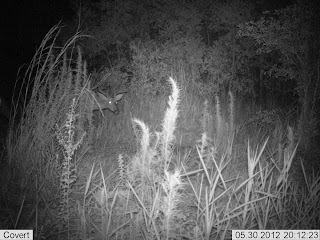 If I were a less law-abiding citizen, I’d probably spend the better portion of July camped out over a corn pile with my .300 Win Mag on a Harris Bipod. There’s a gorgeous buck who’s been hanging around the area. Being that it is only early June, those horns are in their infancy – hope to see them come October, but you never can tell. While he’s a daily visitor now, it’s possible he’ll be a memory by then. A mainframe eight and quite a prize for this area, those antlers would look great on the wall. Even better covered in velvet.

I shot one velvet buck when I was 17. I missed the first several days of my senior year to hunt the traditional August 15th rifle season. He was a young six-point that took just too long crossing a road before the aforementioned .300 caught up to him. A few more steps and he’d disappeared into the swamp bottoms of the Salkahatchee. As it played out, he’s a unique mount in my collection.

I returned a few days after my 21st birthday – you have to about be young and dumb to participate in these brutally hot, humid, and flat-out mosquito-infested hunts. I hunted the very same area I’d killed the six 4 years prior. The deer action was nearly constant in the mornings and evenings – the Low Country of South Carolina has some deer, I’ll clue you. At the time I had a handheld video camera that I purchased right before everything went digital and captured wonderful footage of does and lesser bucks feeding and fighting, but nothing big enough to satisfy camp rules.

One evening, a gentleman arrived at the shed with a dandy eight-point. It was nothing that would grab the attention of a far-gone Midwestern antler crank, but he was a stud for those parts. The guy had shot the buck as he fed in a wide-open soybean field with two or three other bucks. I’ve personally seen and taken larger deer, but this was about the most handsome whitetail I can recall. That summer red coat contrasted so perfectly with the darkening fuzzy antlers, it became my mission to find a trophy like that.

Unfortunately it’s still on my dream list. The fellow who hosted us passed away. I was invited to the same area in 2004, but had a pesky hurricane problem that August which prevented any travel. By the time I did return to that September for a guided hunt, the bucks were off their summer feeding pattern preparing for the rut, and had shed their velvet. Invites that never panned out and dueling financial realties have pilloried any chances of return, but I still have that urge to find that trophy velvet buck.

So it’s with great interest that I watch this buck. He and a younger, far less impressive six-point are mowing through my corn. I’m trying to decide which child of mine will have to cut back on their feed so I can continue to keep this guy around.

When a hunter thinks about whitetail bucks it is often about how crafty or intelligent or adaptable they are. The more you study them the more you realize how inefficient they actually are as an organism. Imagine working out and taking supplements constantly for a few months over the spring and summer pumping up the guns, chasing women through the fall, and then laying around exhausted and gaunt through the winter – actually, I believe most gyms rely on this very model. 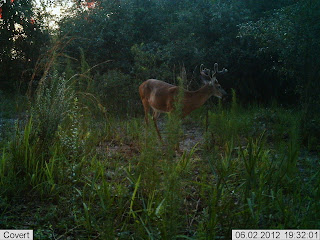 Deer antlers are the fastest growing bone in the animal kingdom and each year they drop them and grow new ones. That velvet is actually a vascular system that transports blood and nutrients to the growing antler. It takes a great deal of nutritional support to grow those things and can be seen as an indicator of a deer’s health or ability to gather nutrients from its environment. This is why black soil bucks will grow larger racks than a deer around parts of central with sandy soil and palmettos, put simply.

As they mature, they quite literally flower out from the bases or pedicles. The velvet carries supplies to the tips of the tines while the cartilage that forms behind it converts to bone. Once growth has peaked the bone dies and the velvet is shed leaving that classic All-American Whitetail antler. All of this takes place in a span of 3 to 4 months.

Fun side note, antler velvet has long been considered by the Chinese to have medicinal value. It is believed to function as an anti-inflammatory, boost immune systems and fight cancer. As you can imagine, this has created a market for antler velvet, but the main contributors are elk and farmed on ranches. I believe I’ll continue to ingest backstrap and venison in the form hamburger for my own health.

So whitetail bucks are locusts, eating machines during the offseason. It’s why I take only small stock in their patterns right now. It’s helpful as can be to have trail cameras around feeders and food sources to appraise the deer population. But once that velvet is shed, it signifies the start of the challenge of deer hunting. Obviously a buck still has to feed throughout the fall, but that drive is overshadowed by a much more powerful one and the reason bucks even grow antlers – the rut. The bucks that so reliably dine on feeders throughout the summer will start traveling far and wide to find as many ladies as possible. This is when we’re in the woods and realize he’s not the dumb creature that’s been stuffing his face in the heat of the year.

I’m still not sure how I’m gonna go about hunting this buck. It’s nice to know he’s there, but the property is small and there aren’t too many deer to start with. He could be a mile away by pre-rut. Or maybe not; always hard to say with these things. 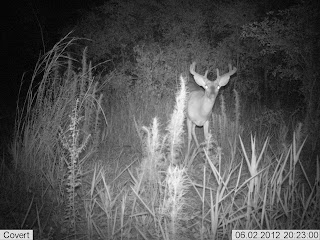 I do know for certain that velvet will be discarded and a fine set of antlers rests underneath, and I’d love to have a crack at them. May turn out, though, that these trail camera pics will be only tangible mementos of this buck.