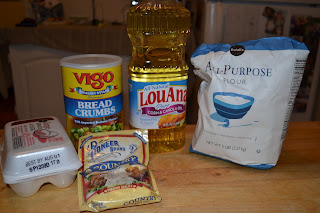 I love country-fried steak. I want it written as the Cause of Death in my obituary – not “Congestive Heart Failure” or “Myocardial Infarction.” “Country-Fried Steak.” I want people to know I crossed over on a slick of white gravy. Whether at a Cracker Barrel or a Greasy Spoon in the middle of nowhere, CFS is my go-to order breakfast, lunch, or dinner. Add some form of potato in there to mop up the goodness….Dig It!

It’s also easy to make, and cubed venison steak is the golden-fried ticket for a great home-cooked meal.

Defrost the cubed steaks in the sink with warm water. When thawed, drain the water and re-fill with cold water and ice cubes to draw out blood and any gamey taste. After 30 minutes or so, remove from the water and pat dry. Season steaks with Garlic Salt and set aside.

While the venison is thawing, set up a little prep station. In one shallow bowl, dump flour seasoned with garlic salt. In another bowl, beat the three eggs into a wash. And a third bowl will be used for the breadcrumbs – yes, this is fairly dish-intensive, and yes, you’ll probably be too full and suffering from gravy shakes after dinner to want to mess with it, so clean as you go. When the steaks are ready, press them into the flour, rinse through the egg, and press well into the breadcrumbs. Set aside the breaded cutlets while the oil heats.

There are two ways to go about frying the steaks. I prefer an electric deep fryer. Get the temperature to around 365 degrees and cook for about a minute or until golden brown. These thin cuts don’t require much more than that. The other option is pan-frying in a cast iron skillet. I suppose it is more traditional, but I always have trouble with loose breading burning and ruining the second and third batches of steaks. Heat about an inch of canola oil over medium heat and cook for a couple minutes, flipping the steaks once or twice.

For the gravy, I just buy the mix that comes in whatever packaging looks more Old-Timey. I suppose I could make the gravy from scratch – or the breadcrumbs for that matter – but for $0.99, who cares? It’s worth saving the time.

When everything is ready, slather the steaks with gravy and serve with mashed potatoes. A little A-1 never hurts, either.

So there you go, one of my favorites, Country-Fried Venison. The reason I’m sweaty, a little dizzy, and out of breath from typing this. 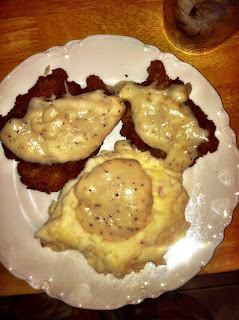 Love A-1 Steak Sauce, don’t know why. For cream style gravy, thicken and strain stock, cream or half and half that has simmered with onion, bay leaf, clove, and nutmeg (add white pepper or Tabasco). Jaccard® is the meat tenderizer tool with the blades that fits in your hand. Long live country fried steak…

I like it fried but don't need the gravy.

Rev, you've made me very gunshy about posting recipes. I'm clearly no master!

Becky, to each his or her own, but gravy is necessary!!!