A Few Things About Treestands

I hung my stands a couple weekends ago. To say they are in precarious positions would be an understatement. Unfortunately our lease consists mostly of scrub oaks, trees not well-suited - with their twisty trunks and reaching, branches - for treestands. I managed to place a Gorilla lock-on in a young white oak of some variety. It took creativity. The ascent is a combination of swinging and climbing up branches like said primate with two Ameri-Step Rapid Rails filling in the gaps. The foot platform rests at a 70-degree angle. It’s a herniated disc waiting to happen. My other one isn’t much better. Nearby I hoisted a generic 16-ft ladder stand that is situated on a thin scrub oak. At that height, it waves back and forth to the point I may need Dramamine to sit in it if there’s more than a gentle breeze. This may be the season of safety harnesses.

Treestands are traps and should be treated as such. And if you know anything about trapping – and I don’t care if we’re talking about a line of lobster pots or a cardboard box propped up with a pencil and kite string trigger – you have to a) put them where the game is b) give them time to work without disturbance. I don’t recall any episode of Deadliest Catch where Captain Sig said, “This bottom sucks, but let’s drop our gear here and hope the Opilios come to us. When we’re done with that, just for fun, let’s go check the cages we just dumped out. Maybe we’ll pick up Edgar while we’re at it; he’s probably getting cold.”

I recall, with very mild amusement, a group I hunted with in a few years back. They hung stands in early November having never seriously pre-scouted the property, would finish their morning hunts with little deer activity, and proceed to move them for the evening hunt. This would repeat itself several times over the course of a few days. They only came to camp for lunch and prepare to move stands again. I’m convinced moving stands was their sole purpose for joining a lease – it was their hobby. Needless to say, they didn’t kill a thing, darn near ran everything off before Thanksgiving, and spent the rest of the season walking…I’m sorry, “still-hunting” the place. They weren’t bad guys or anything, just novices with all the gear and no patience. 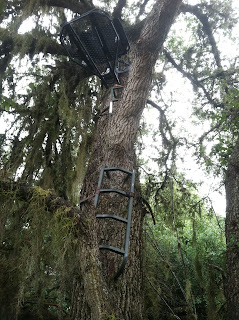 So the stands I hung aren’t exactly ideal if comfort is your measuring stick. But the fact remains they are located in areas where the deer travel. The lock-on lords over a major trail that leads from the scrub into an open pasture. It’s the last finger of woods winding from thicker cover towards the field and bordering orange groves, places with more browse than the scrub. Several trails converge in this general area. It’ll be my bow stand as the deer will continue using this trail through the early fall to feed.

The ladder stand is directly behind the lock-on by no more than 40 yards, shielded from view by an oak and vine canopy. But, I’m able to look at something different from this vantage point. While the bow stand pinpoints where trails come together, this stand guards the trails as they fan out through the scrub. It’s much more ideal for rifle hunting during the rut as bucks roam different paths for hot does. Why so close to one another? Well, there are three other folks on this small property with plans and agendas of their own. This is one spot of deer activity I liked. No need trying to cram stands in between everyone else’s business. Done properly, it’s all the space I’ll need.

I get married to stands. I’ve never hung more than a two or three on most places I’ve hunted. You can only hunt so many spots and trying to cover them all is betraying your scouting efforts. Detail your strategy, hunt it as such, and know when not to hunt. I have lived and died in this manner for a long time. As such, I also get very jealous and paranoid about how stands are hunted. I used to hang a decoy stand to lure other hunters away from my honeyholes…or maybe I still do…

I only begrudgingly permit use by others – unless they are community stands or something like that – and have to pop Seroquel to prevent nervous breakdowns when I know someone else is in there. I figure everything I do when around my stand is ruining my own chances at Big Buck. I constantly feel as if I'm screwing up. Absolute paranoia. But paranoia has helped me shoot a lot of deer.

The factors that will kill a stand location are as follows – weather and curiosity. There’s not much you can do about the weather. If a wind is bad and alternate stand locations are limited, forgo the sit if you know a big buck is in the area and you have more time in the season to hunt – that’s kind of a moot point on quota hunts or if you only have a weekend or two a year; by all means, stay out there. But if you’re actively hunting a particular buck or quality of buck you know to inhabit your land, you are only hurting yourself hunting swirling or otherwise bad winds, not toughing it out or fighting the elements. Rain is a different story. Big bucks often move in the rain – it’s not something I like to do, but I’ve seen enough hunters pull in nice bucks during a soaker that I believe there is merit to the theory. Rain plus wind – not unless I’m in a covered Cadillac stand with plenty of juice on my iPhone for entertainment.

Curiosity, though, is the biggest preventable factor in ruining a stand location. My dad is culpable of this. We’ll hang stands one weekend, and he’ll spend the next few checking back to see if acorns have fallen, to add one more strap to the tree or adjust it just perfectly on the trunk, check on rubs, add tarsal glad misters and scrape drippers etc. Before hunting season starts, my SOP is to hang them way beforehand and leave them the Hell alone, best of my ability. It’s hard when running trail cameras and corn feeders. I wear rubber boots at all times and avoid contact with vegetation as if I’d catch cooties by brushing against it.

Also, when the season does start, be wary of Stand Burnout. No matter how hard you try, you’ll never completely eliminate scent. It may not be a big deal if you hunt a stand every few days, but a morning-and-evening slog back and forth several days straight will foul up the area, no question. It may not even be scent; it could be the noise you make while walking in or unseen deer seeing you and spooking. I don’t plan on hunting my lease but maybe once a week so it doesn’t concern me to have those two stands so close – given more land and time to hunt, I’d certainly spread out my efforts, having different set-ups to adjust for wind, time of the season, time of day, etc. Again, I’ve never been partial to Musical Stands and only place 2 or 3, but there is something to be said for options.

Again, a treestand is essentially a trap. It must be kept fresh and kept in one spot long enough to work. If everything goes to plan, you’ll be the one springing it, and the planning and cultivation and successful execution of that area is the highlight of deer hunting.

I envy your early start. We always say that we are going to get some work done before it gets too hot. Guess what! It never happens. Always wind up sweating it out in September to get ready for October gun season!

There are plenty of reptiles I will assure you!

“Tree stands are traps and should be treated as such.”<~ Indeed, Ian! Many hunting enthusiast, like you, believe that it is easier to hunt from the comfort of a tree stand. However, a few techniques must be learned to hunt a deer successfully. Such techniques include camouflage, line of sight, and tree stand placement. They usually vary from different angles, but a hunter can enhance his ability in hunting in the long run.