Hogs on the Run 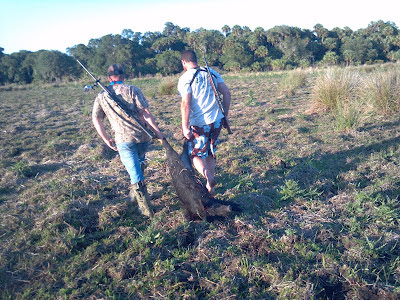 We spied five or six hogs slinking along a wet-weather pond on the edge of a palm hammock around 5 in the afternoon. At 250-300 yards and the wind in our favor, there wasn’t much chance of them picking us out, even though there were five of us tromping through the underbrush. In all reality we could have probably just walked across the field and tapped them in a cold assassination style. But, there was plenty of cover for a stalk, and we are hunters. Gotta play the part, you know. The hogs filtered in and out of view as we darted about trying to close the distance. We needed to get to one last myrtle bush before we could deploy and cut loose.

Well, we never made that myrtle. The problem wasn’t the hogs busting us. It was the coyote. One old mangy dog was loitering around the herd. These pigs were big enough not to be bothered by a pesky song dog, but they certainly took notice of him after he caught wind of our activities and bounded away. The coup de grace, though, were the turkeys. A couple hens were holding sentry and naturally took off when they saw us, taking the finally-frightened hogs with them. Wild pigs don’t have the best sense of sight, but they’re wary enough to recognize something amiss. (And how strange is it to find a coyote, hogs, and turkeys hanging around each other outside of a Disney movie?)

The next batch was not nearly as lucky. The way we do this is drive the ranch until we spot swine. We then hop out and stalk within range. Sometimes it’s fifty yards, sometimes 300.  Everyone picks a hog and cleans up, hopefully. It is exciting stuff experiencing five rifles bark at once. It’s frenzied. Hog squealing, folks yelling, brass being shucked out just as fast as the action works. It’s dessert after a long winter and spring of meticulous deer and turkey hunting.

Anyway, the next batch was not nearly as lucky. I had my AR-15. Again feeding in a wet-weather pond, this group was caught in the open. We slipped to about 75-80 yards away. The other four saddled up next to a palm, I fanned out to edge of the action. Somebody shot and the hogs scattered like quail, with three or four sows – I lost count in the action – spinning my way and into the Teeth of the Beast.

I doused one sow pretty quickly. With the hail of gunfire, it could have just been an accident, but I caught up to a second that required a trailing job. Those guys with their bolt actions downed one. Krunk got her, which was only his second or third hog, so he was pleased. Three pigs was a fine start to filling the freezers, and we sensed with this much activity early that this was going to be a special day.

The lone gaffe of this assault was one guy missing with my pet .300 Win Mag, which had me concerned the zero was off because it’s an easy weapon to shoot. Being an avid and successful bowhunter, I just assumed Chris knew what he was doing with my rifle. This was his first hog trip, though, and with an archer’s ethos was ill-prepared for the turpitude that had just occurred. Hell, he only loaded one round in the chamber – rookie mistake. We really wanted him to pop a hog and were dismayed that he left this encounter without a ham to call his own. We loaded the pigs in the back of the truck and pressed forward. No more than ten minutes later, Chris had his opportunity. 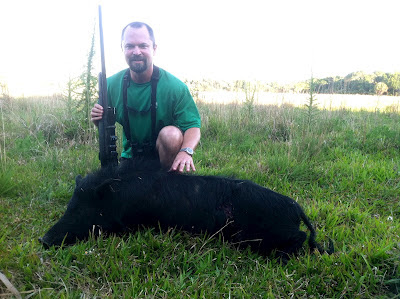 You could just barely make out the line of the boar’s back over the thick grass. Travis and I studied intently with the binoculars to make sure it wasn’t a black calf. Only after we caught his long wire-haired tail swishing did we made the correct call that it was in fact a pig. Travis, Chris and PJ set up a stalk covering a couple hundred yards while Krunk and I enjoyed the experience from the Chevy. This time, Chris came through, felling a 120lb. young boar with one shot.

The action went slack as we drove through the drier sections of the ranch – though still saw plenty of deer and turkey.  We eventually meandered to a section of the property known as the Railroad Grade where we could see down and out across swampier portions of property. And I know it’s starting to sound like a fish story now, but we did indeed locate another herd of hogs.

This time we did creep across the open pasture. They were milling through reeds and other tall grasses and didn’t pay any mind to our advances…we actually trotted to them. I did have a different issue this time. Expecting to guide more than shoot, I only toted along a handful of .223’s and they were gone. So I swapped out to my Marlin Guide Gun in .45-70 which isn’t exactly a long distance poker. Unfortunate because as we stalked up to the herd of young sows, a giant swagger of a boar appeared from the woods.

I motioned over to PJ and he saw the stud, but we were now too spread out and too close to the hogs for any effective communication. Had my .300 been resting in my hands, I would have just screwed everybody else over to shoot that boar. But I didn’t and PJ ended up dumping a fine eater sow. 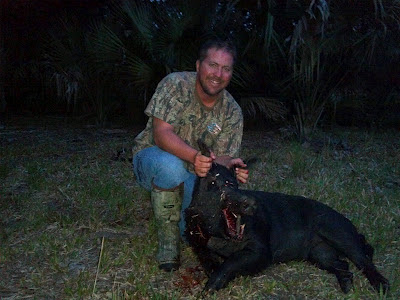 So if you’re keeping count, that would be five hogs and there was still an hour before dark. We decided to split up and hunt the feeders for Last Call. Travis and I were skunked, but PJ, Chris and Krunk had a fat young boar visit their haunt, and PJ promptly settled his hash.

Days like this are certainly special and even on this private land, relatively uncommon. The owner’s annihilating contempt for hogs allowed us to do this, but the game doesn't always cooperate. This time, everything lined up correctly. It’s been dry in and the hogs are concentrating their rooting efforts in the vestiges of wetlands. So while this was a bunch of fun, it’s also a reminder that we need rain badly.

We saw the owner before we set out on the hunt. He told us to kill them all. We certainly tried, but didn’t even make a dent. But it is nice to know there will be some for next time. Gosh that sounds exciting! Nice job to everyone!

Congrats to the hunt! We have lots of them and since the warm winter we hade they had litters during the wintertime

Wild hog hunting is not only inhumane but pointless.leave it to the inbred red neck people in FL to come up with such a moronic sport if you want to call it that . At least with all the stupid people doing this it keeps the red neck population at bay.

Mike D. - you clearly have absolutely zero knowledge on what you are commenting on. Wild Hogs are an invasive species to North America and current population estimates are over 5 million. Sow's generally have 2 liters of up to 14 piglets per year. You don't have to be a math wizard to see how the population has exploded. They are also carriers of psuedorabies. This is a herpes virus that is fatal to other animals like cattle and even fluffy your cat (I'm sure you are single, cat owning guy after reading your comment). Also, large groups of wild hogs (sounders) can destroy countless acres of crops overnight. So, lets look at the facts:
1. Invasive species who's population is out of control
2. disease carrying
3. land and crop destroyers
Now that the facts have been presented to you hopefully you have a change of heart. If you choose to ignore the facts you are probably a democrat in which case, there's no hope anyhow.
Love, Todd