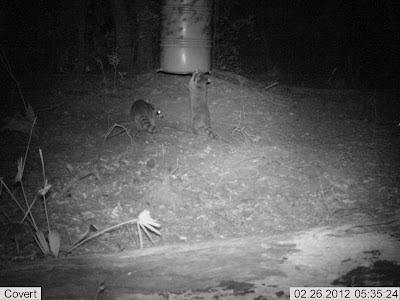 I purchased a Wildgame Innovations 6.5 Gallon Bucket feeder from the Wal-Mart in Sebring a month ago. I typically prefer bump feeders for ease-of-use. No battery changing or wires coming loose, and if anyone steals it, well, I'm out a bucket, essentially. But this one was on clearance, and we have a new lease in need of a few corn slingers. So I hung it in a stand of blackjack oaks to let it dust the forest floor with that magic gold, hoping deer or turkey or hogs would find it.

When I went to check it a couple weeks back, I found it hanging in the tree gutted like Drew Barrymore in the first Scream movie. The battery compartment door had been pried open, the alligator clips and all points of plastic chewed through. I knew the culprit already, but the wads of wiry white and brown fur wedged in the chain suspending the rig above the ground told the whole story. 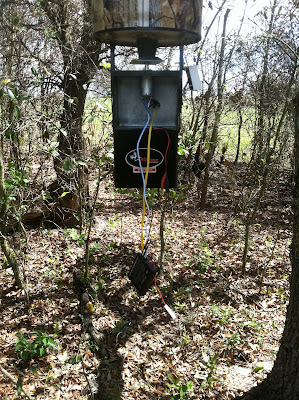 Raccoons are a menace.

Most properties in the state I’ve hunted have a healthy raccoon population, but this lease is Ground Zero for ringtail activity. The land is bordered on two sides by orange groves and a swamp on a third. The trail cameras have worked overtime catching them at night sifting through corn piles – which makes me wonder why the Hell they’d destroy a feeder when I’m feeding them! These coons are well-organized and mobilized. And we fired the first shot.

Back in January, PJ and I set out for an evening of predator calling. PJ has a FoxPro digital call. With no luck on the coyotes or bobcats, we snuck down to the swamp right before dark and switched his call to a Fighting Raccoon noise. Basically, the sound is what you’d expect to hear if you dropped a plugged-in boombox into a bathtub, a cacophony of whistles and pops and grunts – everything but the white smoke.

I laughed when I first heard it, but it did work. Within a minute a coon rushed out of the myrtles and stood on his hind legs before PJ dusted him with a 12-gauge. Since then the Raccoon Army has grown vengeful.

I noticed it first in mid-February. I’d left my Covert Cam deployed for two weeks without checking it and couldn’t have been more excited to review the SD card to see what had arrived at my blue bump feeder. Over the course of some 800 pictures, the raccoons had managed to turn my camera 360-degrees around the small oak it hung on. A photo would reveal a tuft of whiskers, and the next would be pivoted 30-45 degrees in a counterclockwise position. No joke, this continued until they had completely spun it around the tree, tufts of fur caught between the bark and the straps of the camera. As you might guess, this ruined any useful pictures, though I did get a nice butt shot of a deer in the upper right corner of a photo that was framed around a vine twirling up an oak branch.

Thankfully they did not destroy the camera though I’m pretty sure they used it as a urinal on more than one occasion.

We fired the next salvo. PJ obtained live traps and set them near the feeders. He promptly caught and dispatched 3 coons. But then ethics took hold. There was a period of time when none of us would be able to visit the lease, and no one wanted to catch a coon and have it suffer in a trap for a week or so. Like England’s failure to control Hitler at the start of the war, we missed an opportunity to stave off further destruction. It was my new feeder that paid the price.

The thing is, raccoons are not only destructive to feeders, they are pretty rough on turkey and quail populations, as well. Notorious egg thieves, raccoons can really devastate upland bird numbers, especially in areas without healthy populations of these game birds. This land doesn’t have many roost trees and isn’t ideal turkey hunting property, but the nesting potential here is high. We’d like to improve that, as much as four guys on 150-acres are able to do. Predator control is one way to accomplish this.

We’ll probably get back into trapping them this summer when everybody is back in town from far-flung turkey exploits and can reliably check the cages. I’d like to use that predator caller and my .17 HMR and make a real hunt of it. Either way, it’s doubtful we’ll make any huge impact. As I’ve said, there are a ton of them, and raccoons are pretty sharp creatures that adjust in a hurry.

Good luck. I've had to dispatch whole families of coons to get them to stop eating my cat and dog food. Fortunately, one of my dogs is a coon killer and I've gotten up several mornings to find a carcass in the yard.