Touristing Through the Mummies Exhibit 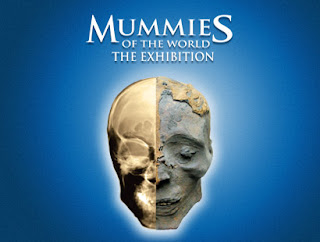 Since I was prohibited from taking pictures, this is going to be a poorly illustrated post. I don’t know if flash photography would conjure up a curse – it was not mentioned in any of the informational displays – but cameras were strictly forbidden. My guess was the museum didn't want anyone undermining their marketing. Also banned were soft drinks, food, and cellphones, for the courtesy of others. Strangely, small children were allowed, though taking them to see mummies is kind of a backlash against proper parenting, I would think.

Carolyn and I actually took our twins to the Mummies of theWorld Exhibition at the Museum of Science and Industry (MOSI) in on Mother’s Day. Mummies for Mommies. Our feelings were that they were too young to be frightened – though, come to think of it, the boy has been shrieking in the middle of the night ever since – and we couldn’t just abandon the kids at Grandma’s since, technically, Carolyn wouldn’t be a mother without them and it was her first Mom's Day.

It’s really a cool show if you don’t mind being surrounded by dead bodies and nerds. The exhibit consists of preserved corpses from across the globe and educational pointers that detail the history of mummification, what it represented to different societies, yadda yadda. They have mummified birds and crocodiles and cats that once meant something to ancient civilizations, which I don’t understand why anyone would want to preserve a cat for any reason other than for a trophy room. The kiosk leading into the main show room asked that we respect the dignity of deceased. It’s really too late, in my opinion, since the museum had no qualms at all about laying them in glass cases with their shriveled privates for the world to see.

But back to the kids. I suffer from social anxiety. Don’t care for cramped, crowded places with strangers – especially amongst the Dead. Toss a wailing kid in the mix, and it shoots through the roof to the point I can only mutter obscenities. Having suffered from this for many, many years, swearing at many, many parents and their unkempt children, I was naturally on edge about my own two acting up. It’s like having a cellphone at a wedding. I nervously check mine 100 times during the course of a ceremony and am ticked when someone else’s quacks or sings during the “I Do’s.” The smart thing is to leave it in the car, something that our legal system foolishly frowns upon when it comes to children.

Beyond this, I don’t know how many of you know people with twins, but moving them anywhere takes more time than it took to arrange this exhibit. The extra bottles, the diaper bag with all the necessities, a double stroller that by law you can’t drive across some rural bridges. It’s a wonder we remember to actually load the children in it, though on this trip we did forget to shut the rear driver-side door to the Sequoia after exiting. Thankfully no one stole off with our collection of dirty spit rags and fast food bags.

So anyway, with it being Mother’s Day, there was quite the audience, and maneuvering this baby buggy that’s roughly the size of a John boat through the maze of Waiting-Line ropes and folks telling me how lucky we were to have twins had the sweat beading on my brow in no time. Once we finally reached the head of the line and had heard the aforementioned warnings about pictures, drinks, and food no fewer than a dozen times from Peter the MOSI Greeter, we realized we could not make it through the turnstiles. We had to turn around and go home and vowed never to leave the house with them again.

No, really we were ushered through a series of double doors with the words “Do Not Enter” written in a dozen languages and into a holding room to hear another speech about…something, I don’t know. The kids, that up until this point had been little lambs, got squirmy, and I more or less blacked out from anxiety that they’d start balling and we’d be hate-hooted right out of the exhibit. Thankfully, another kid started crying which switched the mob's attention and threatening glances away from us.

Once inside, the exhibit was arranged with the glass cases holding the bodies with little placards explaining the Best-Known-History of the remains. Clearly this whole event was sponsored by the CT-Scan Society of America. Each tidbit of knowledge incorporated how CT-Scans were used to help glean more information on how a particular individual died. Some apparently perished of heart problems, lung ailments, poor diet, injuries - I’m not sure how they accomplish this on humans who are a couple thousand years old. I’m just a layman without a CT-Scanner, but I would have just surmised they died of old age. They also said that mummies may help in finding a cure for tuberculosis. I’m not sure how when they’re trapped under that glass, but there’s a lot about science that escapes me. Maybe they flash cameras at them to arouse the Dead into conducting research, I don’t know. Anyway, they were proud of their CT-Machines, and they seemed to flaunt it in the faces of those in the inner circles of the MRI or EKG clans.

Of course, you can’t go to one of these things and not ponder your own mortality. I don’t know how I’d feel about being put on display. I guess I shouldn’t worry about it since I am neither a pharaoh nor visit many peat bogs or glaciers, locations where they tend to find these bodies – see, I learned something. But just the chance that some future family would pay to stare at my shriveled remains has entrenched me right in the cremation camp of thought.

Still, if I do go the burial route and one day my corpse is pilfered from the dirt, rest assured you won't need a CT-Scanner to determine Cause of Death. It's even odds the twins put me there.

(As flippant as this post is, I will testify that we both thoroughly enjoyed it and was worth the time and money. If you’re in , check it out.)