I’m still gushing to folks about the trophy gator we killed in August. What an experience! Three years ago I could barely care about gator hunting. Now, it’s a must-hunt event, provided someone has the tags. In two of the three seasons I’ve applied, I’ve drawn, which totally helps the mood, too. 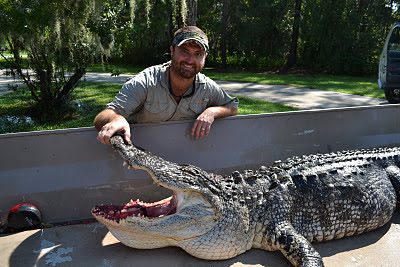 There’s still plenty for me to learn and hunting methods to try. I'm happy to have acquired the gear. Makes finding a boat ride easier. And any gator capture is a thrilling adventure. Just saying.

For those who have not filled all their tags, November 1st marks the end of the 2011 Florida Alligator Season. Just some thoughts from what I’ve learned and enjoy about gator hunting...

- The Mother-types in your life may rile into a dinner table kerfuffle, but gator hunting is a pretty safe activity. The things one may worry about like losing hands or blowing a foot off with a bangstick just don’t seem to happen very often. I really can’t recall any stories like this, and trust me, if it happened, it’d be all over the news. Spring time headlines in Florida are largely reserved for when a lizard chomps a toy poodle off a leash or when a crackhead takes a midnight skinny dip in the local lake and gets bit. There’s a primeval, instinctual fear of these things that forces hunters to comport themselves in a manner befitting the risks. The real danger rests in navigating waters at night, especially in airboats. But, again, accidents are a rare occurrence. Thankfully. Bring this up next time the hens start clucking.

- These are routinely successful hunts. From what I hear, most people who eat tag soup do so from a lack of time on the water. You know, it rains here in the summer. A lot. And there’s plenty o’lighting. This ruins quick trips, as you can imagine. Plus, Life gets in the way between the time you buy tags and when the season starts. Overall, if you put your time in, you’ll see plenty of game, and if your expectations don’t trend towards gaffing a monster, you have an outstanding chance at bagging gator tail. Can’t really say the same about other game species. 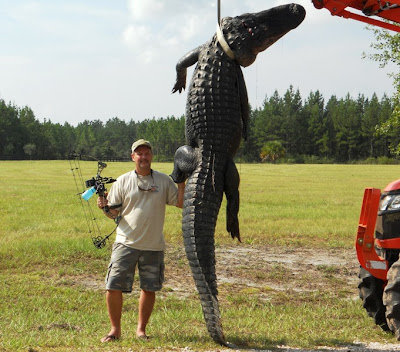 - If you do tag that Legendary Lizard, you have one heckuva trophy. Outside of hunting friends and family, generally no one gives a crap if I bag a nice buck or gobbler. Not so with alligators. Friends of friends and acquaintances ask to see photos of the bruiser we subdued this year. I can’t wait to get the head mount back.

- It's not Swamp People. Curse that show, for that's all people ask when asking about my hunts. We cannot hang baits from trees and shoot them with .22's. And I'm not sad about that.

- I don’t have a yearning desire to traverse the state hunting foreign waters for The One. For those targeting him, though, every year the biggest gators tend to come from the bigger waterways in the state like the St. Johns and Kissimmee. This isn’t to say there aren’t plenty Big Boys in other lakes throughout the state – there are – but these places really pop up in conversations about those that hang from front-end loaders and dwarf the accomplished hunter. If I were to come from out of state, I’d look hard at these places.

- I like morning hunting more than after dark. I can’t say if it’s easier or more successful, but it plays better with the sleep and work schedules. I will attest nighttime hunts are far more exciting, though. 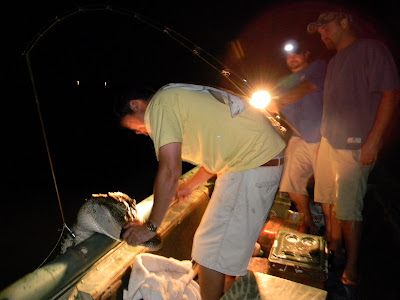 - Like the futility in wishing for $1.50 gasoline, it’d be nice if the FWC came off the cost of tags. It’s about three hundos when all’s paid for – fifty bones for a trapper’s license to even help with the hunt. Though opportunities abound to tag out, it falls just barely within that thin line of good value.

- Having said that, FWC is banking. The popularity of deer hunting is declining a bit in these parts; alligator hunting is trending up – this is probably because the ease of availability, if you get past the cost. This, of course, reduces the individual’s odds of drawing a tag, but it’s nice to see people excited about the sport. Hunting recruitment is ever-important.

- The old trophy hunting adage, “The big ones look big” certainly applies here. You can easily talk yourself into believing a mid-size 9-footer is a stud. Then you see a stud and it changes your opinion of things. Generally, they are craftier and harder to hunt. What’s nice, too, is there’s nothing at all wrong with going after that 9-footer.

- I like the versatility of the hunting tactics. It’s great conversation fodder. We snag ours. Some buddies harpooned their limits by running up on surfaced gators and aiming at bubbles stirred off the bottom when they submerged. And another gentleman I know popped a giant with a bow and arrow attached to line and float. Certainly, different bodies of water dictate different strategies, but you can pick and learn from numerous approaches.

- I love my bangstick.

- These are simply fun hunts. It may not require, per se, a whole crew of friends, but it is better in their company. I’ve compared it before to offshore tournament fishing – everyone has to have a role when the action starts. In the downtime, there’s plenty of slack for the camaraderie. If you’re one of those who require your fingerprints alone to be on every instrument of destruction, I doubt we’ll hunt together. And I don’t understand why you’d want that anyway. 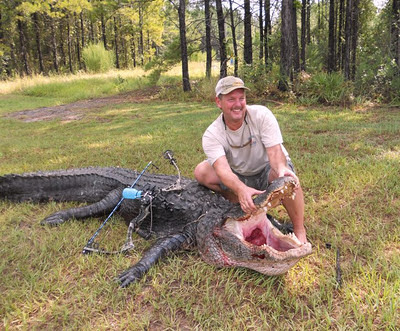 I think is a really cool kind of hunting and it is growing here in GA also!

I see that you won a blogging award for being a Top 60 Outdoor blog! Congrats bud. Glad to see a Southern boy make the list!

Wow that gator is huge. Never really seem to know how big they are till you hang tham and put a person next to them. Glad I dont have to tangle with those up here in Washington State.