The Public Administration program at University of Central Florida required us to take a year of statistical analytics to earn our Masters. Throughout this course, we used a program called SPSS to determine if certain variables had an effect on a given outcome. Since this was a PA class, the topics were geared around policy questions. For instance, the professor had published numerous papers and actively researched people’s responses to natural disasters and the government’s ability to shape policy around that. His goal was to discover how a person’s demographics, geography, exposure to weather reports, etc., would affect whether or not they would evacuate in case of a hurricane or other natural disaster. He reveled in working with data, as only a university professor can.

The information he utilized had been collected through surveys and other data gathering tools. Responses were coded and plugged into SPSS. If people didn’t evacuate a hurricane, what were the reasons, and which had the strongest influence on a person’s decision? A factor that seemed prevalent in a decision was said to have a strong statistical correlation - those that had some influence but weren’t as dominant displayed a weak correlation. And other stuff. Big words. Tons of fun, as you can imagine, and surprisingly, I actually passed. (By the way, my term project was about how poorly the NMFS regulates recreational grouper fishing on the West Coast of Florida which made me the biggest hick in the class by far.)

I bring this up because it is what I think of when approached by the above question. The wrinkle is, we can’t really go out and survey deer for their personal opinions, and there are so many influences on deer movement – especially during hunting season - it’s hard to say if one in particular relates directly to deer activity.

Most of what we think we know is anecdotal which isn’t all that reliable. OK, my guess is avid hunters would say, yes, deer move more during cold weather. But, you know, we hunt during the fall and winter when it is prone to be cold. Folks may say, “I got my biggest buck on that weekend it was the coldest day in recorded history.” Which could be true, but you don’t always know how that one experience translates into overall deer movement. You also have no idea how many times people have hunted when it is cold and not seen spit. But no one seems to recall that. Having just had kids, it reminds me of all the talk about more births happening during full moons. People want to ascribe that phenomenon to a celestial influence, when really The Man in the Moon is a prominent stamp on the memory. No one ever says, “Hey, I had my baby on a waning crescent.” You just notice the full moon – or cold weather – because it lacks subtlety.

Moon phase, rut dates, available food sources, hunting pressure, predator control, and a litany of other factors influence deer movement. Just think through this small list and compare it to your own history of successes and excuses.

“The deer were feeding all night on a full moon, and it’s a weak rut.”

“Too many acorns this year.”

“Hunters have been in my spot.”

“Darn coyotes have the deer buggered up.”

We hunters can rationalize, but it is prudent to place at least a little stock from stories afield. Again, some condition or combination of natural circumstances do dictate how and when deer move. 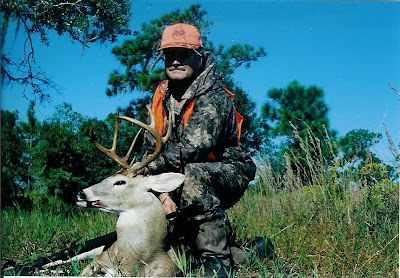 Also, "cold" and “move more” are a dodgy terms. One, "cold" is regional. It's not the same in FL as it is across the whitetail's range. Reports of movement are based on hunter anecdotes. What one sees from a treestand in the evening is a small sample size. Too many times have I come back to camp dejected, hadn’t seen a sparrow, and complained that the deer were acting weird this year and suffered through listening to others gush about their day straight out of a Disney movie. Turns out I was just in crappy spots. Don’t discount this.

So, the question is too vague to deliver a concrete answer. This is where I stop, though, lest I start arguing myself in circles. Because it's easy to. As with politics and public administration, there are rarely absolute right answers, just opinions for what seems to work at the time.

From my years of deer hunting, I’m convinced the best days revolve around the crisp, dry air of high pressure fronts. My finest bucks have come when the temperature dropped at least 15 degrees overnight after a high pressure front has settled over an area - also had quite a bit of luck right before the next wave of low pressure wings south.

So when I think of weather, I try not to believe in what I’m seeing in terms of hot or cold, but whether action comes along frontal boundaries. Maybe it’s because the deer are ready to move again after spending a day in wet, windy weather. Or maybe, yeah, the cooler weather just feels better. It sure seems to snap the rut on. And really cold temps will drive deer to the feed...ah, going in circles!

My purpose here is not to be evasive, difficult, too academic or to bore anyone to tears, just to highlight the difficulty in ascribing answers to deer movement. Yes, cooler weather and drops in temperature likely have that significant correlation; however, there are other things hunters should focus on, like locating a prominent food source, and hunting trails and rub lines. I feel it’s much more important to be in the right place than worrying as much about the right time.

One last thought; it is a heckuva lot nicer to hunt when it is cooler, and this leads to longer sits in the woods. The more time one spends hunting will go a longer way towards hanging deer at camp than any other factor real or imagined.

So what you are saying is that deer move when it's colder??? :) Just kidding my man. Nice write up and very well said!!

"The more time one spends hunting will go a longer way towards hanging deer at camp than any other factor real or imagined."

All good points Ian. I have pursued the whitetail for well over 40 years now with every legal weapon and now mostly with a camera.

Only time afield will teach you where to be under different weather conditions. The deer are always out there, they cannot crawl into a hole like a squirrel or take a vacation two states over although at time you would darn near swear that they did.