Mercifully, hunting shows put the kids at ease. Maybe it’s the whispering hunters. Maybe it’s just the noise of the TV. Or maybe – hopefully - they possess a genetic disposition to hunting. But flipping on the Outdoor Channel or Versus has worked far better than ESPN or any number of CSI shows Carolyn watches.

We both look like we’ve been busted in the eyeballs with tablespoons. I find myself alternating between zoning out and rambling like a drunk in the presence of company. My caffeine intake has doubled in the last three weeks. Ever seen a photo of a woman holding a baby and a cigarette? I’m closer to understanding. They aren’t simply white trash; they are just trying to cope. Carolyn stares out the window like a cat most chances she gets to lay down and rests about as well. Otherwise, she staggers about the house like a POW. Sleep has been a thing of the past.

I’ve planned for deer seasons around weather, full moons, weddings, finances and a myriad of other obstacles, but these kids take the cake. Love them both, but man, what work! Carolyn and I welcomed the twins – a boy and girl – on September 14th. I think. The hours have blended together so perfectly we routinely lose track of what day it is. Little darlings. Crying, spitting, pooping darlings. 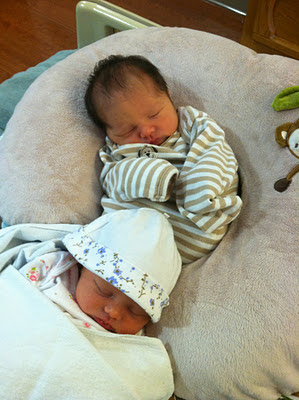 Well, enough of the jokes. I don’t want to further bemoan our station when we’re so lucky. We are very blessed to have two healthy children; it’s our health I am most concerned with at the moment. As much as we love them, it’s time for a release – in my case, the release to my PSE.

She is heading to Homosassa next Wednesday with her mother – God Bless her – and the children for some River Relaxing. I’ll take off that afternoon for a doe management rifle hunt in South Florida, and then spend the weekend bowhunting. I’m scheming on how much more I can squeeze into this moment. Can I find a dove hunt close? I have an alligator tag left. The wise thing to do is sleep, but…

So while the hunting shows are a relief to the babies, they further stoke the fire. These kids have not dampened my passion. Every time I change a diaper and deposit it in the diaper pail, the warm moist air that wafts from the can conjures up thoughts of sitting on my lock-on in the damp Swamp awaiting Big Buck to meander by during an early Fall bowhunt. Sad, huh?

They say things improve after six weeks. Here’s hoping. My annual North Carolina hunt is tentatively scheduled for mid-November. But, being a guy who doesn’t favor the concept of court-ordered visitation weekends, I’ll scuttle it if conditions don’t improve. That’s as far as I’ll wander, though, and the only time, too. The accrued value of the all the swings, rockers, pacifiers, bottles and other gadgets around this place, I could have paid for a handsome lease in Georgia. I’ve been invited to South Carolina a couple times now with PJ. He’s also welcomed me to join him in Pennsylvania later in the season. A piece of me dies each time I say no. I could probably weasel a hunt to Kansas – but I’m about impoverished these days, and their non-resident tags are obscene.

So it’s close-to-home this year, and I did well to secure a few decent opportunities at a buck. I have deer quota hunts for Half Moon in November, Upper Hillsborough in January, and a Special Opportunity bow hunt at Lake Panasofkee. My dad and I will hunt Duette a couple times. All are within an hour from the house and if I had to bail on them, I wouldn’t be out of too much cash.

If deer doesn’t work out, ducks are an attractive option, though not nearly as rewarding, for me. Lake Toho is 45 minutes away and is an easy before-work hunt. I’ve applied for STA tags, and I’m not above driving three hours south for a quick morning hunt. Spending the weekend at Uncle Joe’s is basically out of the question, and that’s OK. We have our annual sea duck tournament in the works, and Carolyn goes on that trip, ostensibly with the bambinos in tow.

Which brings us to another point – it’s only fair to make sure she has her moments planned. She doesn’t hunt but is very supportive of me. Or has been. As I said, this is a lot of work. Money has long been set aside for Girls’ Night Out and facials and massages and whatnot. Too bad it’s not Beach Season. I hope she takes advantage of every opportunity she has to ditch me with the heathens. One positive of this experience I am very proud of has been how well we have come together to operate and address this challenge. She’s endured more hunting programs than she would have ever imagined just for a few hours of Peace and Quiet.

Well, Feeding Time is almost here – I wish game animals were as predictable in their eating patterns as these two are. The sound of grunt calls and gobbling has been drowned out by the occasional whine and my frantic efforts with the musical mobiles to keep them mum for at least another thirty.

Babies are a major lifestyle change – as if you couldn’t put that together on your own. I look at both of them and can’t help but wonder how they’ll grow. They may grow up to be World Class hunters like their father. Or they may protest the hunting shows that once subdued them and have no interest in the hunt, which is fine, too.

I hope the latter is not true, though. I’ve been told by so many that one of the greatest joys of a hunter’s career is sharing the outdoors with his or her children. Only time will tell.

Sounds like you are doing great Ian. Enjoy being a Dad and believe me when I say that they grow up too fast! Hang in there my man!!

Nice looking pair, my oldest is sitting next to me looking at the twins and says she want a little brother and a sister... no reset button for the DEDH... I look forward to your write up about baby proofing!!! Take care man...