Hogs always need managing. A herd of a dozen piggies ran in front of the Chevy mere minutes after arriving for an afternoon hunt on a private ranch in Sarasota County. We’d see probably 40 more before the day was done - but not without taking a few shots.

I spied three young hogs tossing dirt under a low hanging oak. It was early in day and we were seriously after deer, but these guys did not spook as we drove past. We parked the truck and opted for a stalk. Travis grabbed his pet .257 Roberts. I elected for the Marlin .22 Mag riding in the back; my .300 would have blown swine this size sky-high. 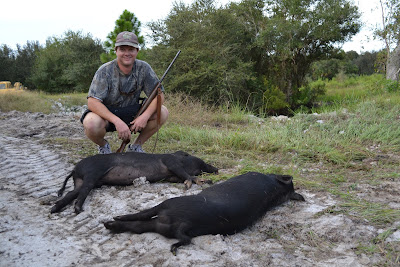 With the wind in our favor, we stalked in the wide open, over a creek crossing to within 20 yards of the hogs who were too busy rooting to care for our advances. Travis was on point and squeezed the trigger, flopping a 50-pound sow. Another hog bounded out, and I fired high as he dipped down a slight depression in the terrain. The next pig was not so lucky, catching that small bullet behind the shoulder and rolling up in the dog fennels. Two meat hogs in the truck and four hours left to find a doe.

This ranch is an amusement park for hunters, and to be allowed to hunt deer – or hogs - here is special. For decades the whitetail population tried to bounce back from a tick-borne disease that severely thinned the herd, as the story goes. Only about 15 years ago did the owners decide enough animals recovered to allow a couple deer killed per year. It’s hard to believe, driving around this 9000 acres of Old Florida pine and palmetto flats and prairie, that this was ever an issue.

These days, bucks are restricted to family members and special circumstances, but the doe program is less restraining. With cooperation with the FWC, the ranch has access to a high number of doe permits based on yearly surveys and harvest data collection. Most years, the quota is never reached. The ranch manager requires information such as estimated weight of the deer, time it was taken, and names of successful hunters to be logged at the cleaning station. The hunter is asked to remove the head, heart, liver, kidneys, and urethra from felled does, and they are turned over to biologists to gauge the overall health and age of the deer. At the end of the season, this information is consolidated and presented in a yearly report.

Over time, the overall harvest account of does and bucks reveals vital herd statistics and is used to pinpoint rutting dates. It’s been fascinating to review over the last few years. All I know is there’s been no shortage of deer on my visits, and I’ve glassed really impressive bucks for this part of the state.

Last year the FWC changed the hunting dates for South Florida to try and accommodate the varied rutting times. In far South Florida the rut could be as early as August. On this ranch, generally speaking, the rut occurs in mid-October, yet it does not occur within a concise measurement of time. The rut is often strung out with a fairly strong secondary rut – if even this can be easily defined. Maybe with the data collection applied over the long term, that’ll get figured out. Regardless, by October, bow and muzzleloader seasons are long retired.

Which pleases me just fine; I love a rifle hunt more than all else. And while bucks were out of the equation, I equally enjoy taking a doe for freezer meat. It’s not carte blanche slickhead shoots, though. One, they want to take older does from the herd, and hunters are encouraged to pass on younger animals. Also, a hunter must use caution that he or she does not punch a small buck. With its sod fields, cow pastures, and prairie, it’s easy to mistake a young spike for a doe at long range. In fact, with a breeding season as scattered as it is, yearlings born early in the Spring easily reach 100 pounds as winter approaches – accidentally blasting a button buck or small spike would be a cinch without a careful forehead review.

With the rut underway, Travis and I expected to see the bucks a-chasing, but even on private lands, the weather can waylay anticipation. A full-moon and lingering low-pressure front hung over the state on this hunt, and it hindered the deer activity. (Which makes it really weird we saw so many hogs because they are typically invisible during full moons.) We saw one small buck with its nose to the ground on the north fenceline but that was the only deer sighting for most of the day.

Besides deer hunting, we also needed to do feeder maintenance. A summer storm had flooded a couple of the older ones, rotting the corn and creating a wretched sour stink that maybe only moonshiners appreciate. Travis and I were preparing for a barefoot slog through the wetland mitigation area – a section of the property protected from cattle grazing and other agricultural activities - to retrieve one of these feeders. I glanced West and noticed a lone deer standing on the edge of a palmetto island.

Though she had spotted us, she was at such a distance that she did not spook, allowing us ample time to check that she was in fact a large doe and not a rutting spike. I found a quick rest, upped the Nikon to 9X and settled on her high shoulder. The last thing I remember before flipping forward the safety was Travis asking if I could hit her at this distance.

My Savage Tactical .300 Win. Mag. - shooting 165-grain Winchester XP3’s - barked and the doe crumpled on the edge of the treeline. I gotta say I was quite pleased with the shot, right around 250 yards. With my rifle zeroed to hit where I aim at this distance, the bullet caught her exactly where I held the crosshairs. 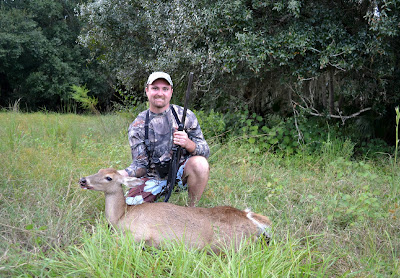 Though confident the doe was legit before the shot, I was awfully apprehensive walking forward to check my prize, hoping I wasn’t tricked by the low light of the cloudy evening and long distance into shooting one of those smaller bucks. Since it is a rare privilege to have access to such a place, you don't want to do anything to ruin the hospitality. Turns out, this was the kind of doe the ranch was looking to harvest – mature, with a long nose and blocky head. We loaded her in with the hogs and went about collecting the feeder as the sun fell towards the Gulf.
Posted by Ian Nance at 10/20/2011 03:54:00 PM

I do enjoy reading your stories. Easy to read writing style. This ranch sounds like heaven. Hogs at my lease have all disappeared (good for deer hunting), but I do enjoy piling them up whenever I get an opportunity... and those opportunities have all but disappeared as well ;(

Thanks, Al!!! Hope (?) some hogs come back for ya. Thanks for reading.

Great hunt! The guy in the picture looks just like a "Travis" I know. If you still have my e-mail, shoot me a line and slove my curiousity.

Sounds like some good hunting stories. I do most of my hunting in Texas. www.peartreegameranch.com . I will look at Florida as another place. Maybe to some alligator hunting. Great pics everyone.

Please forgive me for my tardiness here. I had read your post when you first published but for some crazy reason, I forgot to leave a comment!?! (My brain is slippin' though, for many reasons)

Anyways, CONGRATS there Ian on gettin' those backstraps down! Way to get it done!