I’ve seen plenty of crappy bobcat mounts. In most cases, the head looks all wrong, as if his skin and fur were pulled back in preparation for a face lift. The tufts that make the cat so distinguishable are flattened; eyes bugging and whiskers lay bare the resemblance of a feline that had been rescued from a storm drain.

And as I’ve written before, I have a personal preference for how I have animals mounted. I didn’t want him chasing a bobwhite, quarrelling with a raccoon, lounging on a tree branch or covering his feces with dirt. Nothing wrong if others choose these poses, I simply prefer a fair representation of the creature’s nature when the Moment of Truth arrived.

Bobcats are also lithe animals that are much more impressive in Real Life. Without antlers, it’s difficult for taxidermy to capture the trophy or quality aspect of the animal. Being skinny creatures, a lot of mounts – especially those in which the animal is lunging for a flying quail – emphasize this. The manufactured eyes are oftentimes searing yellow or grasshopper-green with the queried lifelessness of a politician whose teleprompter died. Or so fake you look for a red button to push so the cat's jaws will move and start crooning "Cat Scratch Fever." It becomes the first thing one notices about many mounts. The eyes on a live bobcat – while hypnotic for sure – typically aren’t the first things I recognize in the field. You instantly see that cunning, fluid animal. As I said, it’s tough for a taxidermist to capture that. 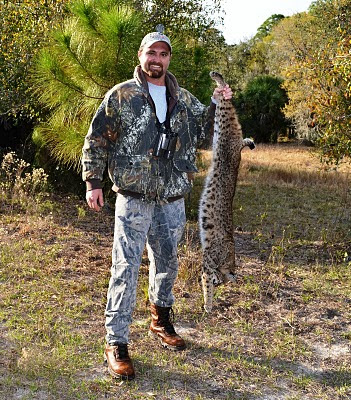 Being one to loathe wasting money, I was trepidatious when deciding to have a large wildcat mounted last February. But I have been taking animals to George Norwood of Plant City for 15 years and know the quality of his work.

I was not disappointed.

I set out with the peculiar set of goals described above. With this cat, I wanted his hockey puck feet visible and not buried in any background. Since he was shot while prowling around after a female, I preferred a semi-stalk form with his mouth slightly turned and mouth open, but not so much that he’d be snarling. I wanted his ample manhood hanging well below his thighs...

No, but what was really important was to capture the body size of this beast. This was a 20-30 pound cat - pretty large for this neck of the woods. Looking through the taxidermy catalogues, I couldn’t find quite the form I wanted and allowed George the artistic license. With that, it just became a waiting game to get the mount back

And here are the results. 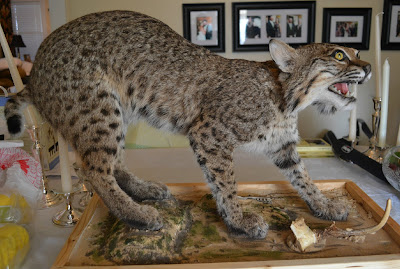 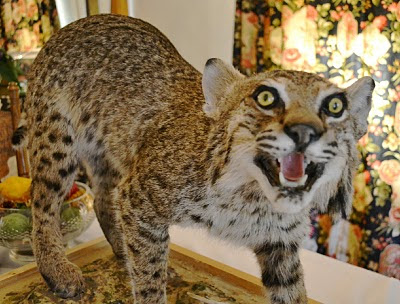 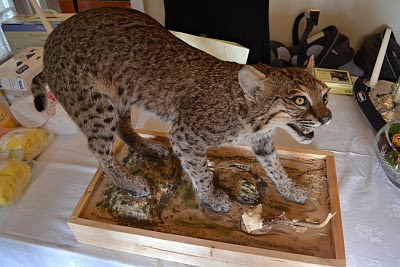 In the end, I wish the head was tilted down a little more and those damn eyes were softer. But that's being ticky-tacky - the craftsmanship of this mount is outstanding. The eyes are set well into the head, his muttonchops are prominent, and the half-crouch/semi-sneak pose does justice to the cat’s frame. My photography talents betray the size of the animal, as well as the handiwork. Perhaps I should have put a handle of bourbon next to it for a size reference.

Anyway, very, very pleased. If you ever decide to get a bobcat mount, always ask the taxidermist for samples of his work and a few phone numbers from other clients. Remember, no matter what style of mount you prefer, poor quality is never cheap and approaching it in this manner will leave a bitter taste. Shop around for what you feel comfortable spending – but remember to gauge the taxidermist’s work. It’s a unique piece of work; think value over cost.

This will be my only, foreseeable, bobcat mount; happy it turned out this well.

Despite trapping for a few years, the only bobcat I ever saw in the wild was when I was coming back from the outhouse at the little country church I attended as a child. I remember thinking it was an awfully large kitty and wondering how it lost bits tail!

What a beautiful coat! Nicely done getting that one Ian!