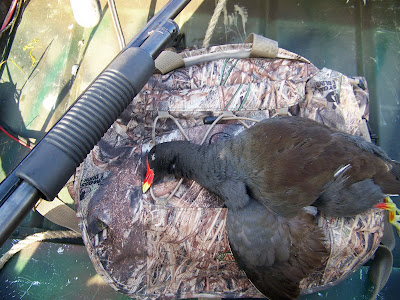 It’s not essential to purchase a specialized moorhen shotgun, but something out of the ordinary waterfowl gun adds to the challenge. I opted for my single-shot H&R Topper 20-gauge I’ve had since I was six, the Twenty more than enough muscle to splash a moorhen (In the picture above, though, is a Mossberg 500). But, since I’ve had this gun since I was six, the firing pin is not what it used to be. Sometimes the round would detonate on the first attempt. More than not, on the third or fourth try. This either gave the bird enough time to run across the lily pads into the safety of cattails. Or, the water exploded under the creature, and we could go collect my prize after enough comments were made about my flinching between dry fires.

Moorhen hunting is prima facie absurd. These are inoffensive water birds that do not dip from the sky into decoys. They do not flush in front of a beautiful pointer. They do not strut or gobble, and there is not enough of a tradition to justify hosting a BBQ after a shoot. But, in Florida, and many other states, they are considered legal game birds, and there is plenty of opportunity to hunt them.

In case you do not already know, moorhen are those water-walkers that inhabit your neighborhood duck hole. They are the creatures that cackle and scream and splash in the darkness, conjuring up thoughts of brain-eaters and other haints and goblins. Not to be confused with coots, there are also striking birds. Mature specimens are dark coal with vivid white markings on their wingtips and underside. Their long yellow legs with spindly, splayed toes and sharp claws enable them to navigate on lily pads and other aquatic vegetation without sinking into the drink. Finally, they have a bright orangish-red shield on their foreheads – coots have a white beak. Honestly, one day I’ll get one mounted to add to my waterfowl display.

What they possess in fashion, moorhen lack in sporting appeal. As related above, they don’t flock into decoys or perform other ritual rites that endear them to hunters. To my knowledge, no Moorhen Unlimited organization hosts chapter banquets with Hooters Girls peddling raffle tickets every year. Hunting them is not particularly challenging. It’s a wonder there is a season for them at all.

But there is, and it’s not without benefits. One, it’s the earliest firearms season in the state, opening around the start of September. Since the good folks at the USFWS don’t deem us deserving a dove season in accord with the rest of the country, this is our first chance to sling some lead – er, steel. And with Early Teal starting at the end of September, a moorhen shoot is often combined with duck scouting. In the past, we have had moorhen tournaments, which is fun. With literally thousands of birds on most duck-huntable lakes I’ve been on and liberal bag limits, it is high-volume shooting. Finally, they don’t taste half-bad breaded and deep fried.

Maybe it’s just the Redneck Human Condition, but anything that involves an early-fall day with buddies burning through a box of shells and ends with food dipped in hot oil has my attention.

Our modus operandi for hunting them is pretty straight-forward. Spot a few birds in the open and motor within firing range.

Now, I’ve never discovered any literature on what it legal or illegal about all of this, so if something we’re doing runs afoul of the law, just take this as a fictional read. The most important thing we do is make sure all motors are off and our forward momentum has halted before shooting. With the vegetation present in the areas moorhen prefers, mostly hydrilla, lily pads, and water hyacinth, coming to a quick stop is no big thing. 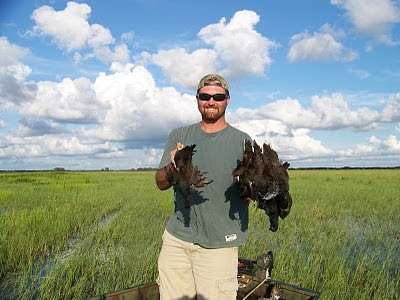 Sometimes the birds will fly, and, oh well, on to the next group. Other times they’ll scamper to the cattails before slowing on the inside edges of cover, in which case, bang, bang! Yet in some instances – and we moorhen masters consider this the Holy Grail – they’ll up and fly, and you wingshoot them. Moorhen are not particularly wary, so there are plenty of opportunities if a few individuals don’t cooperate.

As I said, I’ve found no clear laws regarding what is legal or not for licenses in particular to moorhen, but I won’t hunt without at least my FL hunting license and a migratory bird permit as stated in the Migratory Bird Regulations published every year. I usually have state and federal duck stamps by this time. I’m not sure these are required, but it should calm any rattled game officers. Steel shot and shotguns plugged to three rounds in accordance are required.

For meal preparation, let me warn you of one thing – get them cooled down as soon as possible. I lost my entire bag a couple weekends ago, and I am sickened by it. I kept them in a cool spot under the bow until we got to the ramp when I then iced them down. I was unable to dress them that evening, but re-iced them before going to bed. The next morning I got up early to complete the chore. There was still plenty of ice in the cooler. Before I had the first breast finished, the blowflies had covered my work station. The smell of the birds gagged me. The moorhen had spoiled, presumably under the bow. Ice them down immediately.

When you do, the meat is surprisingly tasty. Cut the meat off the breast – it’s not much more than a forkful. You’ll note the flesh is paler than duck. Soak in a little ice water or milk to remove any bloody or gamey taste. Toss in cornmeal or crushed saltine cracker and deep fry for a couple minutes. I had my doubts the first time I reached to the plate. The meat is mild and would be great dipped in a horseradish or deli mustard. 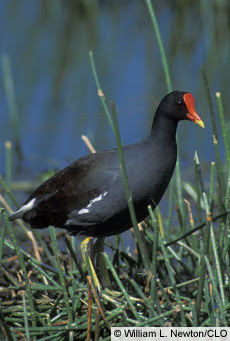 Moorhen hunting is an innocuous event, but with a little creativity, it’s a fine reason to get out on the lake and do some shooting. And in Florida, it’s a cinch to find a place to hunt.

Agreed. But I just had twins. I'm out of the game for a few weeks! But I'll be back, for sure!

Sounds like a really cool hunting experience and I agree, this time of year I am ready to shoot anything that is considered legal!!

Moorhens Unlimited, ha ha. In eastern VA we used to joke about starting Snipe Unlimited for the same reason. Go in the marsh at low tide. Watch the water come up. Birds fly when the marsh floods. Not difficult.

What a waste of time

Well written piece. And funny. I laughed at least 3 times. Thanks for getting me pumped to go back in the marsh. Shared with my buddy and he is pumped too.