On September 14th, my wife and I welcomed our baby girl and boy - happy, healthy, beautiful, perfect. As one may imagine, the twins have delayed the start of Ol' Huntin' Season. At least for long-range, all-weekend deer.

As much as I hate missing archery season, I should be back on my grind towards the end of October with a muzzleloader.

I took this buck three years ago and the story was posted on my old Polk Voice blog. Since that original website is long gone, I thought I'd re-post this and reminisce. 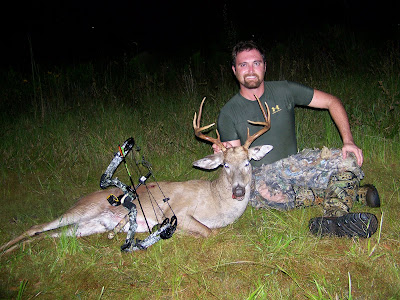 "All things on earth point home in old October; sailors to sea, travelers to walls and fences, hunters to field and hollow and the long voice of the hounds, the lover to the love he has forsaken." – Thomas Wolfe

An honest 30-bird covey of bobwhite is a rare sight these days. But here they came, a pair or three at a time, near endlessly scooting out from the palmettos, chirping as quail do, picking their way though the short grasses of the oak hammock in their uniquely nervous, quirky procession. And though given the opportunity I’d hunt them with fervor, just seeing these strikingly handsome birds was a pleasure, just enough to knock me out of a foul mood.

See, my gentle disposition in the woods is dictated, sadly, by favorable conditions; too cloudy, too windy, too rainy, or too hot and I start poo-poohing the hunt, second-guessing myself and moping like a jilted bride. And this day was a steamer. Surely, no deer would get within bow range the way I’d been perspiring, scent killer or no.

Making matters worse, my stand was a Frankenstein job – 8 feet of ladder and seat, with a blind fashioned from PVC and camo cloth, barely wide enough for my shoulders. I couldn’t hang a taller stand in the hammock or I’d never see anything through the branches of the live oaks. I wanted to put a ground blind in here, but didn’t want other light-fingered hunters to relieve me of one. This stand was an abomination, uncomfortable and ill-suited for taking bow shots. But there’s one philosophy I do subscribe to; even if your stand is less than ideal, the only way to kill deer is to be where they are, and this hammock swarmed with game.

But, oh, the heat. The quail, my only entertainment in three hours of sitting Saturday afternoon, abandoned me alone, I thought, until I caught the swishing tail of a young doe feeding under the short oaks to my left. A 60 or 70 pounder; if she got in range, she was going in the freezer.

As she slipped behind some palmettos, I awkwardly rose from the seat, catching the stabilizer of my PSE Octane in the blind, and tangling the Grim Reaper in the netting. Ugghhhhhhh. I worked deliberately to right my situation, mad I’d even messed around building a blind, sweating even harder in the desperation and anxiety of having a target nearby and the entire prospect of success rapidly going to pot.

Thank the Heavens though, even with all this commotion, the doe fed undisturbed. Still, it wasn’t to be as she meandered away from the stand, until finally disappearing back towards a creek bottom.

Discouraged and still convinced that’d be the only action for the day, I cursed my way back to the seat, bow dangling over the edge of the blind, and began second-guessing my stand placement. I should have put it closer to the swamp line. But then again, I’ve hunted this hammock for three years. I’m right where most deer cross in the evenings from the creek to get a mouthful of acorns before entering a palmetto flat at dark - the classic transition zone. And there’s still plenty of light left. Luckily, through all my buffoonery, I didn’t spook the doe and wasn’t winded. Hope remained. Just settle back down.

Around 6:30 a cow bellowed in the distance. Almost as a response I heard the unmistakable, “bahhhh, bughhhhh,” of a grunting buck. I stood slowly, this time avoiding hanging the broadhead in the blind, just in time for a tall and wide swamp buck to come trotting out, a mere 15 yards behind my stand.

I half-expected the deer to keep walking to a small clearing where the quail had been feeding. I slowly turned that direction, but the buck – and remember, while I am in a ghillie suit, surrounded by a blind and oak branches, I’m still only 8 feet off the ground – caught my movement. He stopped, bobbed his head a couple times, peering under a low-slung branch, hoping to catch me screw up more.

Avoiding direct eye contact with him, I waited for him to put his head down. When he obliged, I spun back the opposite way, guessing he knew something was wrong and would return to cover. Call it once-in-a-row, but I was right. Not spooked, but definitely alerted, the buck slowly turned around to head back towards the swamp.

I had one window to shoot through; the buck just had to cross there. As he did, with the bow already drawn, I grunted with my mouth and in the next motion as he stopped, touched the release and delivered the arrow to the strike zone, him taking off with two other whitetails that I’d not noticed.

On the ground, I found my arrow with good sign, but still resisted the urge to immediately follow-up. I returned to the truck, called Dad, and chiefed down a couple smokes, just trying to rein in the adrenaline.

After returning to the scene and an easy tracking job, the beautiful eight-point rode the game carrier back to my Dodge for pictures and the triumphant return to the check station where the biologists took a jaw for aging, and examined the kidneys for fat content while hunters approached to congratulate us. As it turned out, mine would be the only buck taken from the property this weekend – blame it on the heat, or moon phase, or lack of acorns.

For all its aggravations, when success finds you, bowhunting is immensely rewarding, and in a couple weeks, I’ll be back for another round.

Congrats bud! Kids are the best!

Twins, yikes!!! Congratulations and there will be plenty of outdoor opportunities coming your way. Looking forward to reading your progress under the wonderful circumstances.

Congrats Ian on the twins! Have fun my man!!

Congratulations to you and the wife on the new additions, Ian! That is great news.