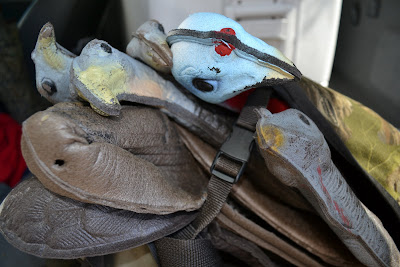 Carolyn is eyeballing my hunting equipment with the evil glare she typically reserves for slugs and people who write checks at the grocery. Gear has been strewn across the house, mixed with her laundry, and engaged with her nice threads in a fierce battle for closet-space dominance since September. I half-expect to come home one day to find it aflame in the front yard like a Nazi book-burning conflagration.

She probably thought in February, after I put the deer gear away, that she’d earned a reprieve. Then Cabelas brought me a new leafy suit. That will probably serve as the kindling.

But, alas, the time has come to stow away the gobbler gear. If that leafy suit survives, it’ll be my primary hog hunting outfit for the summer. The rest will be vacuum-sealed and put “away.”

Before then, though, I thought I’d pass on some friendly reminders for your turkey gear.

1. Toss your mouth calls in the fridge. I left a few in my truck last season - I’d just as soon put chewed gum back in my mouth after a year than those diaphragms that disintegrated in the heat of the cab.

2. Clean the shotgun. My shotty gets rather grimy by the end of turkey season. I’m sure to disassemble the gun, clean the barrel, brush out sand and dirt and dust from the action, and apply a thin layer of oil to the metal for storage over the next ten months. 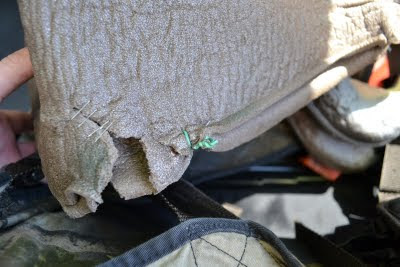 3. Patch up decoys. My flock of collapsible foam dekes is rather ragged. They are torn easily. You can see where I’ve tried to staple, glue, and tape them together over the years, God forbid I buy new ones. Now, I use wire garbage bag ties that work well for holding the decoys in one piece.

4. Reassemble your turkey vest. When season starts, each of the nearly two hundred pockets in my vest is designated for a call, clippers, flashlight, car keys, harmonica, and Snickers bar. By Week Two, it’s all piled into one of the main cargo pockets. I like to correct this anarchy before it’s all shoved in the closet.

I hate putting away my gear. It’s a heartrending finale to the season.

And as you are packing up, we here in Maine are starting tomorrow.

You have the same ugly... ahem.... I mean beautiful decoys we have, lol!

This year I'm leaving those darn things home though. I swear they've spooked off more toms than they have ever brought in. Darn things anyway!

Sorry you didn't connect this year but it could be worse. I've NEVER connected with one. Thursday I will give it a go again as I am a glutton for punishment... Fingers crossed!

I've had jake decoys spook toms; never been a problem with the hens.

Good luck to you both this season!!!

That sounds all too familiar. You got a good laugh out of my wife, who refers to herself as a hunting widow for long streaches throughout the year, with this piece.

My wife was happy to get the recognition she deserved.