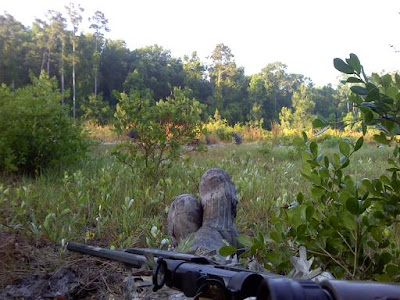 The Osceola slipped through the fog like an apparition 90 yards away. We’d elected not to use decoys since this was a field bird and others in the area didn’t respond well to them. As he craned his neck to peer through the haze towards our calling, I wondered if we’d screwed up.

He gobbled once or twice on this terribly humid morning. He paced back and forth and strutted, but never came any closer. Finally, he lost interest and wandered over a berm than ran along the ditch.

We’d seen him fly down with other birds, probably of the female nature. When his feet hit the floor, there was no doubting this to be a trophy animal. His companions were nowhere to be seen as we attempted to will the gobbler across the clearing lifting our hopes that he’d saunter by to investigate the soft purring and clucking emanating from the oaks.

When he did top the rise, PJ and I sneaked half-crouched to the berm to see if we could whack him on the other side. By the time we made it there, he’d already put 100 yards on us. And this time, we saw the hens, feeding in the freshly graded road along the ditch, eating the sprouting green grass. He moseyed along with them, gobbled once or twice more, then off towards a large Bahia field on private property.

This was near Orlando on private land. That next evening, PJ and I returned to hunt. We spotted the large tom and another out in that Bahia field. We slipped around to where he had roosted the morning prior hoping to intercept him on the way to bed.

Oh, they gobbled just fine. Problem was, they never left that field until fly-up time, and even then chose a distant treeline to call it a day. Hampered by boundaries of private property and potential armed trespassing charges, there wasn’t much we could do.

I loathe writing about unsuccessful hunts – if a hunt’s success is measured by a kill. Most folks want to read about lead and dead. Anyone can write about NOT killing something; hell, it’s the easiest thing to do.

I’m not even sure I could impart wisdom on what to do different; of course, I pulled out no secret trick or tactic. Maybe we could have used dekes in a magical arrangement. Perhaps less calling. Or maybe realizing that this bird was inviolable. Again, there’s not much knowledge one will glean from the One That Got Away. You can just never be sure as individual birds possess unique attributes.

This spring has been like that. Quiet at first, then gobbles, but on other properties. That, in a nutshell, was the last three weekends of the season.

Hunting Chassahowitzka, the only gobbler I heard was again on posted land. Tracks dug up the sandy firebrake I hunted. Strut marks, in several places – it was a super-highway that had the hopes piled high. However, not a thing visited the set-up but a bobcat with a caught rabbit and a doe that tip-toed close out of curiosity, which is neat and all…

Last year I couldn’t stay out of the gobblers, in many of the same places I hunted this season. It goes to show how everything can change.

If there is anything to learn or recognize from all of this, it is that Osceola hunting is a unique challenge. Downright difficult at times. I can’t really say I should have hunted more, because I about maxed out the time available. Luck, Mother Nature, the toms themselves all have to align themselves properly.

It’s been humbling and frustrating, for sure.

Sorry it didn't work out!
The biggest bobcat I have ever seen was in Chass, they seem to grow large there.
MBeck