Last we checked on my bowfishing exploits, I had pinned my first gar before losing the arrow to the muck of a central Florida lake thanks to the shoddy line and reel set-up. I vowed to correct this error, and correct this error I did.

Well, my wife did. In fact, she bought me the AMS Retriever Pro for Easter. The AMS is a slick deal. It holds the 200# Braided Dacron in a bottle. When you shoot, the line flies unimpeded. When you want to reel it in, you pull back on a lever-like trigger and the line dumps back into the bottle. Easy as can be. Love it, in fact. Much better that the spool system that came with the PSE set.

From there, I installed a Whisker Biscuit. This may be replaced in the near future. The arrow is too heavy for the bristles to support. And the rest obstructs the field of view. A drop-away rest would be cool, but that’ll have to wait. Finally, I screwed in a generic stabilizer that was lying around. 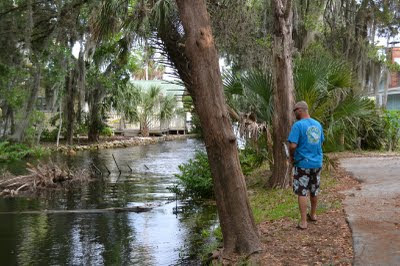 Sights may be my next objective, but I haven’t figured that out yet. One, how to sight it in? If I were shooting flat-footed on a level field, it’d be no big deal adjusting the pins. But, I’m shooting off a dock or boat at a fish of varying distances and depths, each factor adjusting how you aim at the target. It's like the exaggerated form of shooting at a target from a deer stand.

The water distorts the target. The deeper the fish, the farther below it you must aim. Likewise, if a fish is a little farther out, but higher in the water column, you still have to aim significantly below it so the arrow won’t plane. Unless I am observing this all wrong. Either way, I don’t have the time to perform the calculus necessary for setting pins to compensate depth and distance though I have a neat idea for a targeting system involving anchors, balloons, and my in-laws’ pool.

Still, the rig is a major upgrade from March. My only other experience with longbows or recurves came a few turkey seasons ago. A group of South Carolina turkey guys arrived to an Osceola camp with their longbows. They always said, the trick is to focus on the target; not so much trying to aim. I’ve kept that in mind through these trials.

And, let’s just say if I needed to stick a gar with one shot to save my life, or to fend off a deranged clown with fanged teeth with this set-up, I’m not sure which next of kin I’d pass the bow along to. Bowfishing is the single most challenging thing I have done in my life that doesn’t involve counting with both hands. Without exaggeration.

Besides the challenge of gauging depth and distance, a lot of it has to do with the fish I’m attempting to spear. I watch these YouTube videos where guys are slogging across flooded cut corn fields whacking broadsided carp and whatnot. These little Florida gars are not that. They are a skinny target and armor plated to boot. Mullet lack the protection, but possess the same profile. You have to hit them just right or the arrow will skip off their backs. It'll take a lot of practice to become proficient.

Luckily, there's been plenty of that.

I whiffed on – let’s say – two dozen gar last Thursday. Some shot were wildly off. A couple missed by a scale. And a couple more caromed off the toothy beasts.

One Florida gar did finally swim in front of my arrow. It was my last shot for the day. Just enough to keep me thirsty for more. As it happened, I was leaving for Homosassa the next day.

The mullet were in thick schools around the dock when I arrived. Of course, I hurriedly and impatiently started plunking arrows at them. A little tidal creek near the house also had a fair number. I skipped an arrow off the back of a beaut – mullet will frustrate you, too. When you shoot, they have a habit of circling the arrow and hanging around just until you get the arrow back on the rest, then they vanish.

Missing the sheepshead Sunday was the most damning. A fine food fish, I was salivating at this shot. He was one of those dock fish that had long grown tired of hooked shrimps and weights. This guy was probably in the 5-8 pound range, pretty large for a sheepster.

He was swimming towards me at an angle. I drew back, and at that moment, he turned head-first at me. The arrow streamed bubbles past his left pectoral fin as he motored to deeper waters. 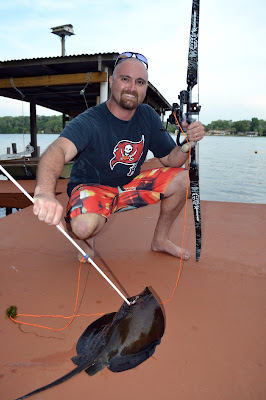 I stomped around searching for a stingray to shoot. They had been all over this weekend. I’d tagged one on Friday. I was reeling in another errant shot at a mullet as the ray slowly scooted along the seawall. I re-loaded and fired the shot as he was about to gain depth. I hauled him to the deck, his barbed tail wildly thrashing about. I ran upstairs to pull Carolyn out of the shower so she could take my picture – any goodwill she had about giving me that reel has long since dissipated.

I was proud, but a ray isn’t much challenge. Over the weekend I watched dozens more without shooting. But after the sheepshead debacle, they offered no comfort.

For those keeping track, I have now shot two gar, one mullet, and one stingray in five months of owning this bow. I’ve shot several hundred times.

By the way, I’ve named the bow “Sweet Jesus.” My mother-in-law bought the original kit for me for Christmas. Carolyn purchased the reel for Easter.

Email ThisBlogThis!Share to TwitterShare to FacebookShare to Pinterest
Labels: bowfishing

Keep it up! You'll get the hang of it!

I may look into investing in one for Rambob for Fathers Day. This could be very entertaining watching him ;)

I am sure you will have it mastered by summer's end!

LB, it's a bunch of fun. Highly recommend it! And I'm not looking for mastery...merely competence