I grew up deer hunting on the ground. What stands we used were usually 2X4’s and plywood nailed in the crotch of a tree. Not on public land where they’d throw you in the irons for a sin like that but on private properties before we knew or cared any better. I didn’t own a manufactured tree stand until I was 23 or 24. Now I have so many – ladders, climbers, and lock-ons – I can’t keep track of them all.

And what a pain they can be! Climbers are portable, but they stink – or rather you’ll stink – using one if the temperature is over 70 degrees. Lock-ons are portable as well, and you can hang them on virtually any tree, but this often requires near death-defying acts of acrobatics to properly secure one to said tree, and once it’s there, it’s a hassle to relocate. Which brings us to the downfall of ladder stands – they are not portable without helping hands and a four-wheeler. 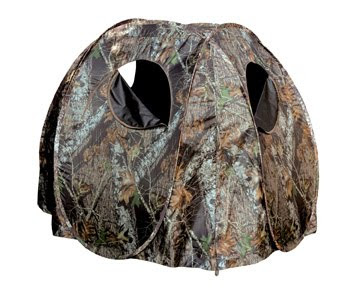 The sick part is, now that I’ve accumulated this wealth of stands, the pop-up style of ground blind is making a surge in popularity. I noticed this back in July during the Big Buck Expo at the Lakeland Center; vendors peddled blinds harder than stands. Next, I’ve noted it on outdoor TV – more shows have hunters hunting from them, and there’s an increase in ground blind ads. It started with the turkey hunting film crews and has worked to the deer hunters, probably because it’s easier to conceal cameras, and less nerve-wracking to have all that equipment dangling from ropes as they ascend a tree. Finally, a guy I hunted with in Georgia, a gentleman whose fixation with buying and hanging stands tilts on the margins of a neurosis, finally conceded that ground blinds may be the way to hunt the cut downs and road ways on the timber property.

From all three of these sources, I’d usually be concerned about buying what they want to sell me, but in this instance, I see the advantages because I have spent so much time successfully hunting with my rear on terra firma.

One, a pop-up blind is simply more versatile than a stand. Take oaks hammocks. If you hang a stand any higher than ten feet in an oak hammock you will seriously limit your visibility in the sweeping, low canopied arms of branches. What about clearings surrounded by palmettos and dog fennels, or even cow pastures and food plots that don’t have an accommodating tree nearby? Deer, especially early in the season, are gonna come here to eat. The archery and muzzleloader crowds should take advantage. Scrub oaks, and younger blocks of planted pine that won’t support a stand? The deer bed in here, and if you place a blind and a corn feeder, you’ll almost certainly get some action. The point is, you do not always have to rely on Mother Nature to provide you with the perfect tree; pop open the blind and place it with a favorable breeze.

Two, improvements in scent-less technology should limit some fears about hunting the ground. Of course, scent-protected or no, a bad wind is still going to ruin your hunt, but with the ground blind you can easily, and quietly, swap positions and work the wind to the best of your capabilities. No need to hang multiple stands to accommodate passing fronts and switching gusts - also nice to have a roof over one’s head when hunting in the rain!

And that brings us to the last point - you just can’t top the portability, and not just in the woods. Put a few climbers in the back of a truck and see how much room you’ll have for coolers, luggage, and other gear, especially if you’ve got more than a couple hunters riding with you. More than likely you’ll have to pull a trailer. Ever try to bring a ladder stand in the woods on an ATV and bounce the legs off every tree you pass? Pop-up blinds are just easy to deal with.

I’m not saying stands are useless by any means just blinds may be handier in the right situations. Thinking back over the last couple of years, there’s not been a deer I’ve killed that I couldn’t have taken from a blind - and several have been - provided I do the same things I did from the stand – play the wind, keep still and be quiet.

They are not without downsides. The wire frame of one collapsible model I own is warped. I got angry trying to fold the thing one night as mosquitoes were de-fleshing me and slapped it into a pine tree out of frustration. My Dad has an identical model that is much easier to fold. Guess I got a lemon.

Ground blinds also require concealment as the shiny new canvas sticks out like a sore thumb if not shadowed somewhat. I also strongly, strongly urge you to air it out and spray with scent killer before putting it in your favorite haunt. If you can detect thet "new car smell," so can a buck, even in a favorable wind. I’ll leave mine erect in the yard away from dogs and exhaust and other game-breaking smells for at least a couple of weeks.

But give them a try. Hunting at ground level is exciting, and I can almost guarantee there is some place on your property that has been neglected or improperly hunted because you’ve not been on the ground.
Posted by Ian Nance at 5/24/2011 03:19:00 PM

They are great to hunt with a kid.
You can stock up on snacks, toys and handheld video games. The hardest part of hunting for a kid is sitting still. Hunting needs to be fun. Some of the nicer ones will even fit two kids if you needed to!

That's a real good point! Guess I'll know that in a few years!

Cool. Yeah, the portability seems to be the most important factor.