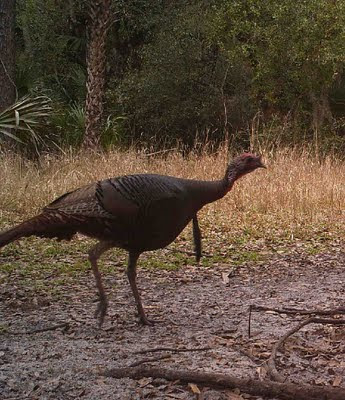 I began turkey season with sky-high optimism. Browsing back through February and early-March forum and Twitter posts, I posited that this would be one of my best turkey campaigns.

I heard my first gobble of the year last Saturday on Weekend 4.

And I’ve been steadily hunting public and private lands. The gobbling activity is just slack. Like airplanes and long-division, generalizations are stupid, but I’ve talked with enough other hunters to believe it’s a weird year for turkey hunting.

Now, some people have obviously whacked toms. The stories are about the same. A gobbler going nuts – but that was the only one really doing much. Those tales came from early in the season and private land. Finding that hot tom has been key.

As usual, weather has played a role in my lack of success. I hunted the Green Swamp a couple weekends ago. Dad had located gobblers a few days prior. Unfortunately, a week of rain passed through the area. You needed a Jet Ski to traverse that property.

The gentleman who yanked Dad’s stuck truck out of a washed-out limestone road he should have never attempted to ford said he’d been hunting hard this year and has heard very little. There or on his private lease in Alabama. A buddy of mine who also has a lease in Alabama was told to not even bother making the drive due to silent toms.

Still, on the ride out of the Swamp, 16 birds had been killed. Someone found them.

Maybe later in the season things will pick up. Seems primed. I hunted private land in Levy County this last weekend. I heard that solo gobble Saturday morning. The fog was authoritative. It ruled the roost until well after 9:30am. Never had much luck in those conditions.

It burned off the next morning and the gobblers went gangbusters. One bird east of me gobbled a hundred times, at least, and all morning long. Everyone in camp heard at least a few gobbles – problem was the hens. They were thick, too.

We hunted late but the gobblers stayed on neighboring, un-hunted land with large cow fields, following the ladies around. It’s tough to do turkey in two days, I will clue you.

Still, we roll on. Will hunt this weekend, then a quota hunt at Chassahowitzka WMA. Hope the birds come on late in the season.

Sounds like my spring as well. Getting very frustrated!

Hunted Bull Creek and Seminole Ranch for a week and ended up turkeyless.

Did you hear anything, though?

Tons of turkey a few gobblers. Saw a panther.