Last week, the Suburban Bushwhacker posted a recipe for venison carpaccio that instantly drew my attention. Carpaccio is generally served as an appetizer of thinly sliced raw veal, venison, or beef. If you read through his recipe, you’ll see there’s an awful lot of preparation for serving something raw.

I was willing to give it a whirl, but my pregnant wife is a little off her feed for wild game. Those changing hormones have created an uninvited distaste for what were some of her favorite meals. Raw deer wasn’t likely to remedy this.

So I compromised. We’ll just use his recipe but cook it. That’s the kind of supportive husband I am.

Anyway, I soaked a whole pepper-coated venison backstrap overnight in generic maple syrup. I had my doubts that the meat would absorb much of the syrup’s flavor. Next, I worried the syrup would char and burn once I placed it on the grill.

Maybe it was the Sugar-Free syrup, but the meat did not charcoal as I feared. I placed the backstrap on the gas grill over high heat, cooking four minutes a side for medium to medium-rare. I let it sit for about ten minutes before carving. 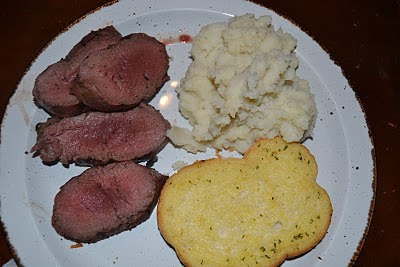 The venison was tender – no surprise there – and the syrup had in fact penetrated the meat for a unique maple flavor that took me back to the wistful days of tapping trees in Vermont’s Big Woods.

I liked it. Carolyn loved it – thankfully. Krunk thought it tasted funny. Of course, his palate has become victimized by years of grilling for hours at a time on a smoker, and I’m convinced if meat doesn’t taste like mesquite, oak, or hickory, he’s not as impressed.

He was right, though, it did need additional spice. Hard to say what I would use with the syrup. Maybe garlic? More pepper?

This is one to keep working with. Maybe cooking it slow would help out. Either way, I’d never considered using maple syrup on venison. We’ll get it perfected in the years to come.
Posted by Ian Nance at 4/05/2011 01:05:00 PM

Not so sure 'bout the maple syrup... but the venison backstrap marinaded in Stubbs w/ blue cheese stuffed inside was the bomb, Ian !!! A very happy girlfriend (& her family) on her birthday dinner... Two backstraps-- gone, quick !!!

I'm delighted to see you've given it a go.

The maple syrup thing was first mooted to me as a marinade for beef at London's famous Simpson's in the Strand, it really worked for roast beef so I figured it would be good for venison too.

Defiantly got to be real maple syrup
SBW

You only need to add bacon. One wrapped around each piece. Maple smoked bacon.