Well, Mike shot the 40-pound red boar for a BBQ. He called a few people to see if they’d want fresh pork but solicited little interest. Out of my allegiance to sport and good form, I passed on shooting one in the pen – really, I didn’t need the meat and abhorred the thought of cleaning a hog in the rapidly climbing heat.

So what to do with the 3 other young boars? There were five originally but minus the deceased and one that jumped up and wiggled his head and body through the fencing to freedom, this trio remained. They were certainly eaters – and they should be dispatched to alleviate the rampant damage they do to the area.

Oh, and then there was the matter of the 120-pound boar in there that would kill you just as soon look at you. 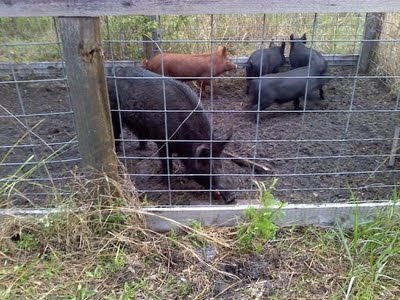 Trapping hogs is kinda cool, and it has hit Prime Time on the Discovery Channel’s Hogs Gone Wild. The show is overly dramatic, but it documents the troubles landowners are facing with the exploding pig population from Florida to Hawaii. Some of the hunters on the show use dogs to chase down feral swine. Others utilize traps.

The trappers really provide the theatrics. When they capture the hogs, the danger awareness lessons commence at once, what a perilous occupation this is and so on. True, but if your objective is to rid a place of hogs, you could make it easier on yourself by, I don’t know, shooting them in the head once trapped. This is work, not sport. Then donate the meat to local charity. Or local scavengers. I know they are not rehabilitating and relocating the damn things. The producers are probably catering to the sensibilities of the common viewer, but I know better.

So, they have one lackey distract or lasso the hog while Stud Trapper gets in and wrestles with the filthy animal. The hog is then tied up and hauled into the back of the truck while the wranglers pose for adoration or perhaps kisses and tins of chocolates like the Parisians bestowed upon Allied troops in 1944. It’s a fun program.

Trapping hogs really isn’t all that tricky, though they do learn in a hurry to avoid them if there’s too much human activity. Basically you build a pen high enough they can’t jump out – and yes, hogs can jump. Not like deer, but I’ve seen them easily clear silt fences. Place bait, typically corn, in the back of the pen and rig a tripwire to slam the door shut behind them.

For the tripwire, most folks use a peg on a line connected to the door and place it in the middle of the bait where it is triggered while the hogs feed. I built one when I was 12 or 13 in my parent’s backyard for a boar that was tearing up the horse pasture. I borrowed chain-link fencing material from a neighbor that included poles and a gate.

After the posthole and wiring work, I ran a tripwire across the back third of the cage. This connected to a tire looped over a pine branch to provide the energy needed to slam the gate courtesy of yet another line. It was all very Mouse Trap-ish and had more rope than a Mayan suspension bridge.

But. It worked. Sort of.

Friends and family helped test and fine-tune the contraption until one evening we watched the boar enter the pen. He tripped the wire. The tire fell from its perch. The gate slammed behind him. The boar immediately pummeled under the fence and into memory.

In hindsight, I probably should have just shot it. But, a lesson was learned. Make sure you bury the wire around the pen or have reinforcements to prevent the hog from burrowing under or running through it.

I thought of this lesson last Saturday morning on my way to try to call in a Levy County gobbler. I had been told the trap was baited. The squealing and banging of metal down the path confirmed a capture.

I approached the trap and shined in with my flashlight. The morning was pitch-black and a low fog hung on the edge of the cypress head, drifting in and out of the cage. I immediately noticed the young swine shuffling about and clamoring over one another to get away from the intruder. Then I heard another, deeper, grunt from the far back corner. I lifted the light to look, and the big boar charged from out of the fog and slammed full-speed into the fencing at knee-level.

A cup of coffee has never been brewed that’ll wake you up that quick. Glad that fence held. Had it been my trap, family and friends would currently be asking doctors which limbs can be saved.

He shook it off and pranced in a circle, popping his teeth. I checked my pants and shuffled on down the road to set up for the turkey hunt. All morning long, I listened to those hogs squeal and whine and bang into the doors. 2 ½ hours of that will threaten dementia.

Gene and Mike met me after the hunt and after we exhausted the rudimentary list of locals who’d possibly want a hog, Mike elected to turn them loose.

This prospect did not excite me.

For all the fun I’ve made about the Discovery Channel boys, they are correct that an angry wild hog is a dangerous critter, and this boar didn’t appear to have lost any zest for reprisal. He continuously beat against the fence, charging us as we walked by. His eyes were fire yellow. Truly, he was a young male, an adolescent eager to prove his aggression.

Mike climbed onto the top of the pen, the boar running about in a fury, sweeping aside the smaller hogs and flipping them in the air out of just pure anger. If Mike had fallen in... 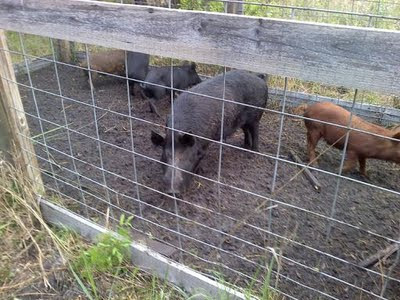 Gene and I backed up to the nearest climbable tree fifty yards from the pen, though the 12 gauge was my first line of defense. Never had a hog charge before. Can’t say how I’d react. If there was ever an alignment of the stars for such an event, this was it.

Mike lifted the gate and the little ones streamed to freedom, leaving their fallen comrade behind. The big one froze at the entrance of the gate, not sure what to do. He gazed our way for a moment, but thought better of it. I doubt he slowed down before hitting the Georgia line.

Don't let them dang things loose! We got enough already!

You could always "cut" them! A barred hog fattens quickly, looses his aggression and taste better. There skulls look cool once their tusk get large. Funny with all the hunger in the world we can't even give these away!

That's is true what you say about barring them. The tusks do get bigger - as do the body size.

We were just lazy for anything but turkey this weekend.

I whispered at the one to look for a guy with a Braves cap and a Browning....good luck.