Our Polk County lease is void of deer. It has a few turkey. Quite a few hogs. And apparently an unseemly number of raccoons. I finally broke down and bought a Covert II Assassin trail camera a few weeks ago and hung it by my bump feeder.

So far I am very pleased with the camera. It takes great photos, is a cinch to adjust and easy on battery consumption. I'll wait a few months before I totally endorse it, but right now the rig is five-star.

It's taken nearly 5000 photos of hogs, raccoons, and one armadillo, mostly at night or early morning. Wish there were more hope-fueling daylight shots, but my stand was - I came to find out - worked pretty hard through the summer. May take a while to restore their confidence. Also haven't picked up on any huge boars yet which isn't totally surprising but did think would happen.

I'm very disappointed no turkey pics have been snapped. They have been hitting the dove field pretty regularly, though. And the hog action has settled down over the last week as they seek the plentiful acorns.

So here are a few photographs. The white and spotted hog with the shoats is dead meat first chance I get. I have hundreds of pics of her and her youngin's. They've consumed a silo's worth of corn. She actually looks pregnant in the recent pics.

Ah, who knows, I may let her slide.

Thick as thieves, these two are 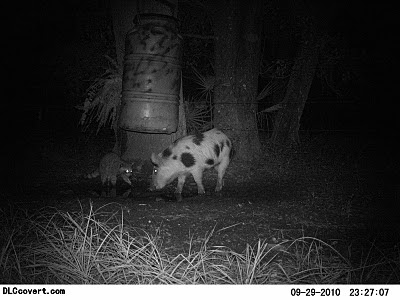 A different spotted hog who is a glutton 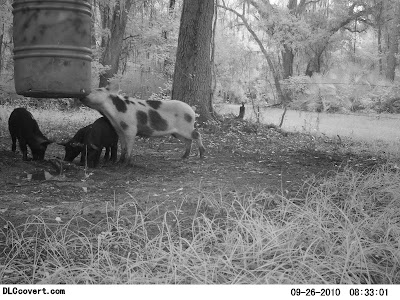 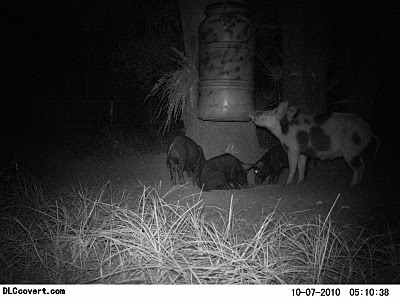 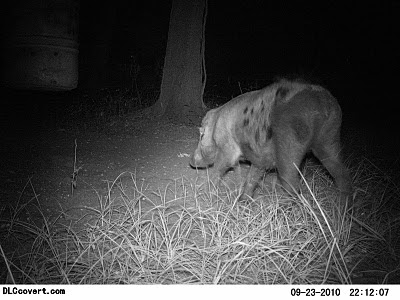 Looks like you have your hands full of hogs to put down, Ian. Good luck! That one sow is a big-un, too. Hopefully you'll spot some deer and good luck on the season.

Yeah, there's a piggy to two to be had. Gonna have to travel for the deer, though.

Best of luck with your season

Looks like a job for Mr Albert's M77 22 Hornet. Hog eradication our specialty...