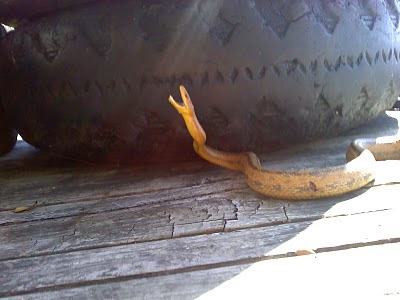 One of those special moments in hunting happens at dawn. The increasing light improves your visual acuity as you begin arranging the shapes and outlines of the woods, pushing aside your imaginations. Slowly, you survey the environment and realize on a turn of the head, hanging there, mere centimeters from your nose – and yes, I went metric to convey the seriousness of the situation – is one of those night spiders as hairy as, and as large as, a brown bat.

You contemplate your next move, half expecting it to drop the nightjar it’s eating and snarl, revealing a row of fangs and snot not unlike the giant squid at the end of the second Pirates of the Caribbean. The more emasculating aspect is you’re toting a rifle capable of downing a bull elk at 300 yards, but is utterly useless on this beast.

Just be glad it’s not a banana spider. I caught one roughly the dimensions of a snow crab crawling up my leg one morning last year and if I’d had a baseball bat, I would’ve cracked my femur beating that thing off me. And walking into their web is like getting tangled in kite string.

Don’t think I’m the only sissy. A few weeks ago hunting in Sarasota, one member in the party employed his mastery of profanity in relaying to us the violent consequences if any of us put a spider on him, or similar jokes. Trust me, if this guy landed a punch, a spider bite would be the least of your concerns.

Really, I don’t enjoy the company of any arachnids. I still have difficulty sleeping thinking about the Skull Island-sized scorpion that crawled out from under a foam arm rest on a stand in Manatee County. You could’ve put it in the lobster tank and no one would notice.

The thing about the local scorpions, though, if you get stung, it only hurts for ten minutes or so. Can’t say the same about snakes. Snakes – and I care not what any herpetologists may say – are evil. Luckily, you don’t see snakes like spiders. If they hung coiled from webs I’d stop going outdoors, period. 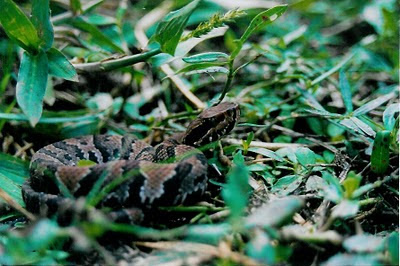 If a snake tags you, odds are, you were doing something you shouldn’t have been. I’ve come up with a fool-proof plan to avoid getting bit – I deny they even exist as I tromp through the woods. Other hunters I know see serpents all the time. I may look like I’m politely paying attention to their stories; really, I’m sitting on the beach with a Corona listening to the waves and terns, or in other such Happy Places.

All these creepy-crawlies hinder sleepy time. I’m well-known for sleep-throwing pillows at dreamed snakes, spiders, and other vermin. Cabin mates have heard me yelling, then the “whump” of a pillow hitting the wall. Yes, the teasing hurts, but at least I’m safe.

Fortunately, neither snakes nor spiders stay active once the weather turns cold, so I hunt worry-free through most of deer season. They resurface in spring turkey, which is fine. A 12 gauge primed with #5’s is an excellent snake and spider repellant system.
Posted by Ian Nance at 10/13/2010 02:24:00 PM

I've caught my fair share of Water Mocs, and more red and yellow rat snakes than you might imagine! Throw in a few Eastern Diamondbacks, and you get the picture. Meanest buggers are them Pygmy Rattlers though. Napoleonic complex is my guess.

I usually catch and release, finding a better place for them than the school yard or playground they're in.

I honestly have not seen an eastern rattler in many, many years in FL. See canebrakes in SC and GA from time to time. Moccassins are all over that lease where I have the trail camera. Big ones, too. No thanks!

Hi Ian,
This is my first time to your blog. I found you thanks to OBN. Since I saw you were in FL, I had to see if you had any articles about snakes. I actually am a herpetologist, and as you mentioned in your post you "care not what" I may say. I won't say much other than snakes really aren't evil. Their venom is all about prey capture, and is only used as a last resort for defense. Most of the folks who are bitten are messing with them in some way. I actually think your approach of just not thinking about them when you walk through the field is a good one. If you don't mess with them, they're very unlikely to mess with you. The only exception would be if they were accidentally stepped, and you can protect yourself from that by wearing good boots and snake chaps. I'll probably be doing a nice piece on snakes as the weather warms up in the spring, so stop by my blog and check it out. I was very interested to hear that you haven't seen any Eastern Diamondbacks in a long time. I have a feeling they will be extinct (in the wild) in our lifetime, and regardless of how you feel about them, it will be a sad loss of part of our southern natural heritage. They are truly magnificent animals... they just need to be given their space.
I enjoyed looking at your blog. I had no idea the deer in FL grew as big as some of the ones you've harvested. I've seen a lot of south MS bucks from similar habitat that don't look anywhere near has healthy. Keep up the good work!

Thanks for stopping by and sharing! As you know, it's all mostly tongue in cheek from my end. I don't generally care for snakes, but they do get a pass if I wander across them.

Local legend has it that the hogs are beating down the rattlesnake populations. They'll eat anything but I don't know if that is true or not.

I've also not seen an indigo in years....they were plum common at one point. Habitat loss is one explanation....but in places they were once thick without development? Something is affecting them!

Eastern Indigos are now federally listed as Endangered. Habitat loss, especially fragmentation by roads, is probably the leading cause for their decline. They are big, gentle, charismatic and, as you probably know, eat venomous snakes. Not too hard to get a snake listed for protection if it eats Rattlesnakes. Rattlesnakes themselves are unlikely to ever be protected no matter what their status in the wild. Indigos on the other hand even have a non-profit conservation organization dedicated entirely to their recovery called "Project Orianne."

They've been endangered for as long as I can remember...it's just in far-off places, especially scrub habitat, where the threats of development are not as severe - or maybe apparent is the right word - they have tailed off for some reason. Too bad. Grew up around them.