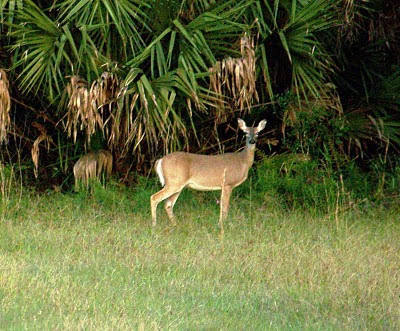 No, I have no idea what that title means. Thought of it on another fruitless sit Sunday morning. I also can’t figure out this last weekend bowhunting at Duette in Manatee County.

Here’s a situation that appeared just perfect for a successful deer hunt - the air was cool and dry under the high pressure system that has settled across the country; the pre-rut is about to start; acorns are Plinko-ing down the oaks. As a deer hunter – or someone arrogant enough to dispense advice on deer hunting – this is how you’d draw up a hunt on the chalkboard.

I mean, there was nothing moving. Unlike two weeks ago when turkeys scared off my deer, the forest was empty. No deer, no turkey, no hogs, no Therma-Cell fumes-induced hallucinations of unicorns or flying dogs. 13 hours of sitting on the stand staring at nothing and thinking of dirty parody lyrics to Christmas songs.

I have a few theories on why the deer weren’t frolicking in front of my stand.

1. The hammock has changed. Three or four years ago, the park managers burned the palmetto flat on the south side of the hammock that drew the deer into the open to feed on the new growth. Combined with the acorn harvest, it was a buffet the game could not pass up. The flat has matured greatly since then, and the edibles have been choked by the waxy, obnoxious palmettos.

Sitting in the stand, I could hear acorns plopping down into the creek behind me. Since it is early in the year, much of the swamp vegetation these deer eat is still growing. The deer don’t have much cause to leave their hidey-holes during the day. I suppose I could move back into the swamp. I should move, but don’t really want to either (I'll explain below).

This is forever a problem with hunts like this when you have limited time to scout. Scouting in February is good because you can get a clearer view of trails and old rubs, and stinking up the joint wandering around just isn’t a big deal. You rely on the history of hunting an area. I failed to recognize that this changes. My success in the past has relied on finding this spot then doing my best not to disturb it for fear of putting pressure on the deer.

Which brings me to...

2. I’m getting help hunting this area. Saturday afternoon I heard a truck on the other side of the swamp banging around. Ten minutes later I could hear the unmistakable clanging of a climber stand ascending a tree. Even though I said above I should have probably hunted the swamp, doing so depends on serious stealth. As I’ve written before, swamps breathe. The moisture traps scent and the breeze swirls it throughout the oaks. It’s a high-risk situation, and if you have any intentions of hunting more than once in this area, probably not the best plan. Deer unseen pick up on this phenomenon in a hurry, and it does not take them long to totally maneuver around set-ups. I heard a couple deer blow Saturday evening at these other hunters to the upwind side of me.

Also on Saturday evening, I had already walked to my stand, but Dad hung by the truck for a little while longer. He said he was sitting there and had two hunters approach with climbers on their back. When they saw the truck and Dad, they started cursing and moped back from where they came. Undoubtedly, they were the ones who hung the green flagging tape in my hammock. Dad recognized them. Their trick is to tape off multiple areas and use their climbers to hunt thereby never committing to the two spots Duette Park mandates. I’d love to wrap their truck in that tape.

3. It was just one of those weekends. There is probably a combination of the guesses above that contributed to the lack of activity this weekend, but something larger was at work, too. The biologist at the check station said that nobody has been seeing much yet. One guy had brought in a 6 point and a doe hung from the cleaning rack Saturday evening, but as of leaving Sunday morning, that had been about it. It is still early. I noticed a couple rudimentary rubs leaving the hammock Sunday. The deer are just being deer, and hopefully my next hunt there in November when the rut is cranking will result in more action.