Footnotes to the North Carolina Hunt 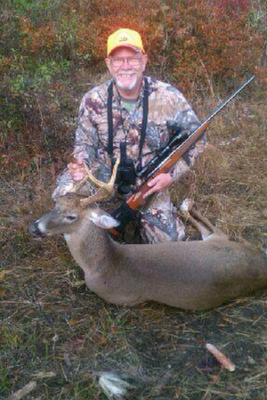 I tried to keep my story about this year’s North Carolina hunt short; I wanted to focus on deer success, for a change. If you follow this blog regularly, you know a lot of posts are dominated by hunts that bear no fruit. I do this not just to chronicle trips, but to also highlight lessons and circumstances that lead to an empty cooler. It’s not exciting, for sure, and folks tire of reading such tales – heck, anyone can Not shoot game. But I enjoy the reflection lest fall into the perils of an unexamined life.

Even with a successful hunt, there is still dissection of information to process. With that, I want to run through a list of addendums to this last hunt.

- Always check your rifle’s zero, especially if you suspect something may have knocked it off. The boy who missed the Big 8 did not. His rifle had taken a pretty heavy hit, sliding out of his back seat and landing on the scope. He didn’t figure it’d be a problem. Not only did he miss the buck, he also whiffed on a doe during the same sit. The next day he took it to the range. The bullet was off the mark by 6 inches. Of course, no one was with him when he re-zeroed...but I’ll take him on his word this time. 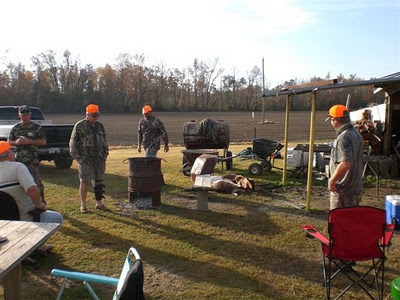 - Novice hunters are often shocked that deer don’t always drop when shot, especially with magnums. The biggest doe I plugged took off and left a feint bloodtrail. The distance was close, and I was shooting a .300 Win Mag with 180-grain Winchester XP3’s. The bullet zipped on through without much energy transfer. Plus, I hit no bone which would have grounded her. Probably. Always check carefully after a shot. Each game animal reacts differently given distance, bullet, shot placement, temperament, whatever.

- On that note, when following up, take your time. I knew the shot was good by the bright pink spoor. But she took off into some God-awful country. She didn’t dash fifty yards, but she did a figure-eight, more or less. Her trail switched back several times, and the path we figured she’d take was way off. As I said above, even with a great shot, the spoor was limited. With two others with me and our noses to the ground, we found her, but not without some CSI sleuthing along the way. One person would mark the last known sign while the other two spread from there. Don’t just assume a deer will run in a straight line. Don’t assume anything. 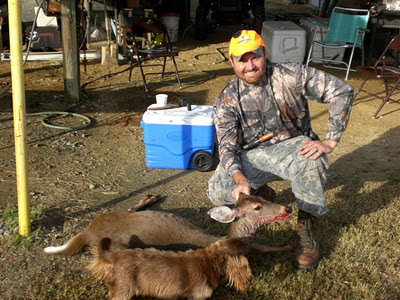 - I made a horrible shot on my first deer – but I have an excuse. Another hunter had placed a homemade blind around the top of the stand and secured the netting with zip ties around the rail. I couldn’t shoulder the rifle without the barrel catching the netting. The one small hole cut in for shooting was poorly suited for covering the trail the deer typically use, much less the bait pile. It was well-intended, but not conducive for beanfield hunting. We corrected the problem after my first hunt, but the blind still encumbered a steady rest. In the past, I’ve used a rectangular seat cushion strapped to the rail for those long shots. Anyway, the blind kept me from doing this. At 150-175 yards, I aimed for the doe’s shoulder but never could get comfortable, sprawling out in the stand trying to steady the bouncing crosshairs. I cleanly got her in the neck, but it certainly wasn’t where I aimed. Don’t go out of your way to conceal your stand if your efforts hamper the ability to make a rested shot, especially if shot distances get into triple figures.

- Not all spikes are bucks that’ll never grow large antlers. It’s amazing to me how rampant this train of thought is, even today. Some won’t, many others can grow. A wide variety of factors affect antler growth. Unless you have trophy management experience on large tracts of land over a considerable length of time, you probably don’t know. Best to let them walk if you’re goal is more trophy bucks. 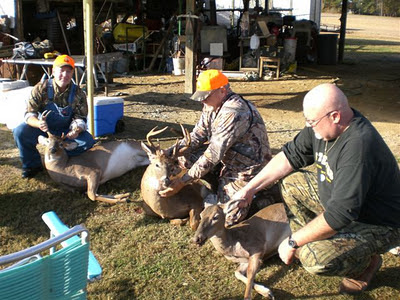 - I didn’t realize how attractive sweet potatoes are to deer. They often ignored the corn and soybeans. These spikes I saw would stand in the pile, pick up a tuber, and fumble it in its mouth like an old man playing with his dentures. Or they’d stick a paw on the tater and rip it apart. They prefer them fresh. After a few nights in the woods, the potatoes will start to rot away and the deer will abandon them.

- And finally, with nothing to do with hunting - normally the Georgia Highway Patrol is stiff resistance on I-95. And they were out in full force, for sure. But South Carolina took the cake this trip. One member of camp got a speeding ticket riding home through the Palmetto state. The offense? 73 in a 70mph zone. That’s low rent officiating.
Posted by Ian Nance at 11/22/2011 09:21:00 AM

I agree with the sighting guns in. We sight ours in 2-3 times during all our seasons. Between traveling, walking through the woods looking for deer, you just never know if your scope tries to adjusts itself or not! ;)

Good observation on the spike issue. It was once accepted doctrine in some quarters that once a spike always a spike but that is far from the truth.

I have seen two bucks that failed to grow larger than buttons at 1 1\2 year of age go on to grow a decent branch antler racks the following year.

some fine buck deer especially for﻿ north Carolina... That was a nice buck.﻿ That is so typically of deer hunting.

"Don't assume anything." Now that's the best piece of advice ever when it comes to hunting!